Dan Yankelovich (chairman and co-founder of Public Agenda) has published a new book on polarization, which is excerpted online. The excerpt argues that Americans aren’t all that deeply divided between liberals and conservatives. According to Yankelovich’s polls, we Americans share eleven “core values that blend traditional and progressive attitudes into a new social morality.” This social morality is “centrist”; “both liberals and conservatives have something positive to contribute.”

To me, the first seven items look basically conservative. I don’t see “equity,” “peace,” “freedom from want,” “saving nature,” “civil liberties,” or “fairness” on the list. The American majority prefers patriotism, individualism, faith, and family. However, as the last four items show, they’d rather not fight about such matters. They dislike sharp disagreement (that’s well documented in other studies), preferring compromise, acceptance, and cooperation. Thus, while their own views are conservative, they’re hoping that everyone will agree to some practical, “common-sense” ideas.

I wish the list of core values were somewhat different, although I suspect it’s an accurate picture of public opinion. “Acceptance of diversity” and “child-centeredness” are the most promising items for progressives. As we know, Americans support spending for education and some diversity in corporate employment and the media. However, those beliefs are perfectly consistent with mainstream modern conservatism.

Despite the majority’s hope for “common ground,” the conservative 25-30% of the population actually disagrees pretty sharply with the liberal 17-20%. The middle holds the balance. They are the ones who most consistently endorse Yankelovich’s eleven “core values.” While they may identify themselves as moderates, I would call them conservatives without an angry edge. 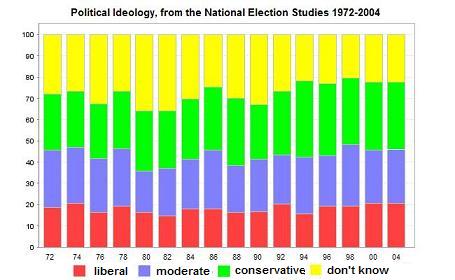 [Note: This is my graph, not Yankelovich’s.]