On our way to Iceland, I read an Icelandic saga that we happened to have in our apartment (because my wife had read it in college). The sagas were written in the thirteenth century, when Iceland was reasonably well integrated into Christian Europe; but they are set 200-300 years earlier, in the days of the Icelandic Free State. This was an amazing polity, a nation formed by chieftains from Norway, Ireland, and other diverse places and cultures. They met annually at an assembly called the Althing, which functioned as a legislature–writing criminal and civil laws–and a court. They had no executive branch at all. This meant that there were no taxes and no public expenditures on things like temples and churches, roads, or armies. For the same reason, there no police power. The main sentence passed at the Althing was outlawry. An outlaw was supposed to leave Iceland. If he stayed, anyone could kill him. 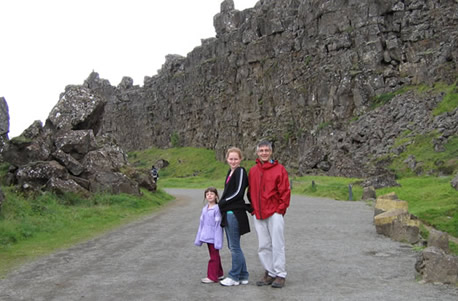 Me and my girls at Thingvellir, where the Icelandic assembly began meeting in 930

Incidentally, women had a striking degree of freedom and equality. They could divorce at will (although they would only receive half of the property if they showed cause for the divorce); and they represented several of the strongest characters in the saga I read. All the characters seem to care whether husbands and wives had compatible personalities and loved one another–which surely wasn’t a priority in early-Modern Europe. Perhaps the hardship of Icelandic life made everyone (including women) indispensable; or perhaps the lack of an executive power prevented women from being dominated.

The Icelandic sagas and their world have attracted distinguished modern theorists with interests in moral philosophy and/or politics and economics: notably, Richard Posner, Alasdair McIntyre, and Jared Diamond. The only primary source I have read is Laxdaela Saga (in translation, of course), but I did find it fascinating. It has a complex plot that can only be described as “realistic.” It is about people and their property and relationships. There is almost nothing supernatural or otherwise unbelievable. Perhaps in a society created as an actual voluntary contract–one that preserved a great deal of individual liberty–people became interested in human motives and actions. What Jakob Burkhardt famously wrote of the medieval mind was not true of the Icelanders. He said that in the Middle Ages,

both sides of human consciousness–the side turned to the world and that turned inward–lay, as it were, beneath a common veil, dreaming or half awake. The veil was woven of faith, childlike prejudices, and illusion; seen through it, world and history appeared in strange hues; man recognized himself only as a member of a race, a nation, a party, a corporation, a family, or in some other general category.

In contrast, the sage-authors were like Burkhardt’s “men of the Renaissance”: “self-aware individuals” who recognized themselves as such. It would be fascinating if their self-awareness arose because they happened to find themselves on an unpopulated island (something like the State of Nature) and negotiated a “liberal” social contract.

I was most surprised by the following feature of the Laxdaela narrative. Gudrun Osvif’s-daughter is the central character, a very strong, clever, and passionate woman who marries four times, begins a feud, raises a family, and ultimately becomes Iceland’s first nun after the conversion to Christianity. Clearly, she loves Kjartan Olafsson very passionately. She hates his innocent wife and provokes her third husband, Bolli, to kill Kjartan–but we can see that even at that moment she is motivated by her repressed love. The narrator sees this too, and chooses to end the whole saga with her confession to her son: “I was worst to the one I loved most.” All of her important acts arise from her unstated passion for Kjartan; but the author does not say so as he (or she?) goes along. Nor does Gudrun or any other character explain her motives explicitly.

It is common enough for a modern novelist to “say and not tell”–in other words, to make a character act consistently as a result of one underlying emotion, but not to explain the reason until the end, if at all. It is also common to explain actions as the results of unconscious and repressed emotions. But I was surprised to find these features in a medieval text. In contrast, the authors of the various Arthurian romances (as I recall) tell us exactly why each character takes each action; yet the knights and ladies act on unpredictable whims. They have little coherence as characters. The author of Laxdaela Saga is both more sophisticated and less explicit about human motivations than his contemporaries in England, Germany, or France. Again, I wonder whether his insightfulness is connected to the political system under which he wrote.

By the way, whatever you do, don’t read Laxdaela saga in the “translation” by Muriel Press (1899), even though it’s available free on the Internet. The sagas were written is a terse, factual, straightforward, easy style. As Gerald of Wales wrote during the Middle Ages, “this people [the Icelanders] have a truthful and terse speech. They use few and short words” (pdf). But Press uses numerous archaism and coinages, turning the original text into something flowery and obscure: more like late Joyce than Hemingway, who would be a better model.