(Chicago) I’m at the #ObamaSummit, much of which can be followed online.

I remember when discussions of civic tech were generally optimistic: people saw the Internet and social media as creative and democratic forces.

I went to the specialized breakout session with “civic media” entrepreneurs and asked them whether they shared the dark picture painted by the plenary speakers. Each gave an interesting and nuanced answer, but in short, they said Yes. The reason they build and use digital tools is basically to combat the larger trends in social media, which for the most part, they see as harmful. Even Adrian Reyna of @ United We Dream, a leader of one of the best social movements that has used online tools, emphasized that relying on civic tech can disempower people and alienate communities.

This is no reason to give up on improving the civic impact of digital media. The work remains as important as ever. It’s just that the atmosphere now feels very sober; the heady days of cyber-optimism have passed, at least for people concerned about politics and civic culture.

I read Kieran Setiya’s Midlife (Princeton, 2017) not only because I have that condition and am sometimes troubled by its complaints, but also because I appreciate the style of thought that Pierre Hadot named “philosophy as a way of life.” Practitioners of this style acknowledge that it is important to develop and test arguments. The philosophical life is one of critical reason. However, arguments should have a purpose: to improve a life. And we must remember that people are habitual and affective creatures. Therefore, arguments—no matter how valid and rigorous—will not change us. We also need practices or mental disciplines to accompany our arguments. But a mental habit or practice can lead us away from the findings of our critical reason. We may train ourselves to be foolish or selfish. So we need habits that are at least consistent with the best arguments, and, ideally, habits that actually include argumentation.

That is exactly the combination offered by the Hellenistic Schools (Stoicism, Epicureanism, Skepticism) and by the classical Indian traditions. It has been relatively weak in the modern West. Setiya shows that it can be practiced today.

He is a professional philosopher in the Anglophone, analytic tradition. A clue that he is trying something different in Midlife is the book’s grammar. Setiya often writes in the second-person singular: “You should …” (as in “You should not prefer to rewind time, erase your son, and try again.”) He also sometimes uses the first-person singular or plural: “I wish …”; “We think …” Midlife reads like a conversation that reports Setiya’s real efforts to combat his ennui in order to improve your life, too.

Midlife is almost free of jargon. But one person’s jargon is another’s helpful terminology, and Setiya makes occasional use of specialized words. His distinctive stylistic move is not his informal vocabulary but his shift to the second-person, which implies a stringent test that can be applied to each sentence and chapter: would an actual “you” find this text useful?

Another clue that Setiya is working in the tradition of philosophy as a way of life is that he recommends repeated practices, habits, or meditative exercises at the conclusion of each chapter. These are meant to turn the arguments of the chapter into therapies that might change our mental habits.

Many of Setiya’s recommendations are drawn from the history of ethics, not original to Midlife. Of course, that is fine; it is useful to review and revive others’ points. But some of his arguments are novel, and I will mention two.

END_OF_DOCUMENT_TOKEN_TO_BE_REPLACED 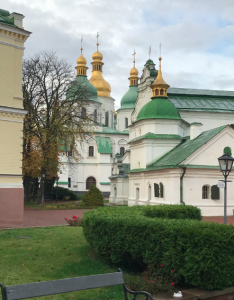 (Kyiv, Ukraine) I am here for just a few days, working with Ukrainian civic educators and my American colleagues at Street Law, Inc. I’ve served on Street Law’s board for more than a decade, but this is my first time directly helping with a project. Ukraine’s plans to revamp democratic education in their primary and secondary schools seem highly promising, and I’m pleased to be able to participate. This effort also connects to another project I’ve done with Ukrainian colleagues since 2014: the European Institute of Civic Studies (which is aimed at adults). Finally, it’s nice to be back in this handsome city as the leaves turn yellow and the air is cool and damp.

Gerrymandering displays several features that are typical of 21st century problems. It’s a consequence of deliberate human action that’s not in the public good. It’s highly technical. If you possess the data, the methods, and the authority, you can draw district lines that will give your side enormous advantages. These methods are scarce and monopolized by self-interested actors who have power of various sorts. It’s tempting to imagine a technical solution, such as programming computers to draw electoral districts, but there is no self-evidently best map. Well-intentioned people who draw district lines (or who write algorithms for computers to draw maps) must balance valid goals, such as competitiveness, compactness, and representativeness. Each of these general values can be defined in several reasonable ways. Tension among values under conditions of great technical complexity is typical of our age.

I’m proud, therefore, of Tisch College’s Metric Geometry and Gerrymandering Group, led by Tufts Math Professor Moon Duchin. Her Group conducts advanced research on the math of redistricting, helps develop a more diverse cadre of people who can participate in these debates (including as expert witnesses in litigation), and educates the public. One of their approaches to education is working with k-12 teachers to teach the geometry of district maps.

Moon and I have a new piece in The Conversation drawn from this work: “Rebooting the mathematics behind gerrymandering.“

About $3 billion was contributed to influence 2016 federal campaigns. In a new paper entitled “Building Civic Capacity in an Era of Democratic Crisis,” Hollie Russon-Gilman and K. Sabeel Rahman suggest a much better way to spend some of that money.

I realize, by the way, that political donors want candidates to notice their support. It would nevertheless make all the difference if they gave one percent of their $3 billion to activities that strengthen democracy–compensating for irradiating the body politic with polarizing and demoralizing messages. Progressive donors would also build the base for more progressive policy by investing for the longer term.

Russon-Gilman and Rahman argue “that today’s populist moment emphasizes the need to create a genuinely responsive, participatory form of democratic politics in which communities are empowered, rather than alienated.” They advocate investments that “self-consciously strive to build constituencies and identities that are more inclusive and accommodating. Think of this as ‘us’ populism, as opposed to ‘them’ populism.”

These strategies imply (as the authors note) a broad understanding of democracy. It is not all about elections, nor even about the official government. It’s about how people come together and exercise power.

The paper offers valuable case studies. For instance, under the heading of organizing:

Examples under the heading of institutions include:

Overall, “Building Civic Capacity in an Era of Democratic Crisis” helps make the case for investments that are less short-term, less oriented to immediate efficiency, less split between government and civil society, but more experimental, more open-ended, and more truly inclusive than we normally see (especially, I would say, on the left).

See also: why the white working class must organize; to beat Trump, invest in organizing; fighting Trump’s populism with pluralist populism; and community organizing between Athens and Jerusalem.