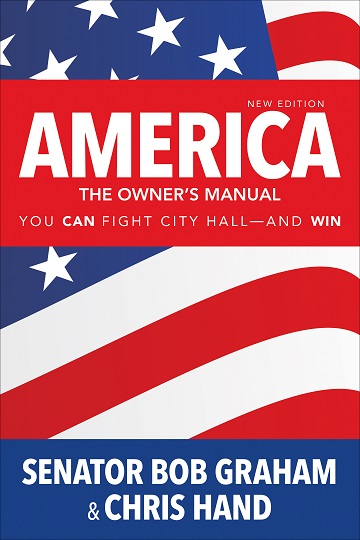 I’m delighted to see that the new edition of America: The Owner’s Manual is out. Senator Bob Graham, a truly dedicated leader for civic engagement, has written it with Chris Hand. They take the research, structure, and impact of the book with the utmost seriousness and have worked hard to revise it for a new edition. As I say in my blurb, “America, the Owner’s Manual is the only book that comprehensively explains how to be effective in American politics and civic life, and it does so brilliantly. It’s consistently practical, realistic, accessible, and inspiring. It’s perfect for anyone who wants to improve the world.” It works very well as a textbook, but you can also use it on your own or with a voluntary group.

In phrases like “civic education,” “civic engagement,” “civic technology,” or (as in the name of our college) “civic life,” what does the word “civic” mean?  In conversations and writing about the topic, I detect several definitions. Each definition can be introduced with a different keyword:

I value all these things. It’s tempting to say, then, that the right definition of “the civic” is the union of all of them. But that seems a bit ad hoc, a miscellaneous assemblage of desirable behaviors and values. It would be better to have an organized account of how they all fit together. For instance, perhaps we need community to provide people with enough support that they can exercise relatively equal power, but power is best when informed by deliberative discourse. In turn, deliberation encourages attention to the commons, allows performance, and both requires and develops republican virtues.

That is a rather discourse-centered theory; one could instead make the various ideas center on the commonwealth, or on democratic exercises of power. It’s also reasonable to weigh some of these ideas much more heavily than others.

We discussed the following questions in my first-year philosophy seminar last week, after having read selections from Plato, Nietzsche, Epicurus, Buddha, and Emerson, and before turning to J.S. Mill. They seem valuable prompts for personal reflection, too.

CIRCLE has begun to release results from its survey of 1,605 Americans between the ages of 18 and 34. CIRCLE’s headlines are:

Contact is important because it gives the recipients information and motivation to vote. These contact rates are disturbing low–and also uneven by region, gender, and party. Young men who live in battleground states have been contacted at nearly twice the rate of young women in “safe” states (38% vs. 20%).

Among likely young voters, Clinton beat Trump by 21 points (49% vs. 28%) in this poll, which was conducted between September 21 and October 3, 2016. USA Today/Rock the Vote released a youth poll yesterday that put the margin at 68%/20%. I’m not sure whether that difference results from methodological choices, such as the way the surveys define likely voters and present third-party candidates; but it is interesting that USA Today/RtV were in the field on October 11-13. The difference could therefore suggest a substantial improvement in Clinton’s margin since September.

The CIRCLE release presents additional information about young people’s attitudes, including this chart that compares the words that Trump supporters and Clinton supporters used to describe their own favored candidate.

I have a short piece in the New York Times’ “Room for Debate” section this morning. It begins:

Once young adults start voting, the habit tends to persist for their whole lives. One way to boost young people’s voting — and their understanding of the political system and current issues — is to teach them civics while they are still in high school. Young adults are more likely to vote if they have experienced interactive civic education, if a teacher specifically taught them about voting, and if they discussed current events while they were teenagers.

After elaborating a bit on the importance of civics, I turn to political competition:

A wealth of experimental evidence also shows that young people respond well to personalized outreach: We have to ask them to vote. The organizations that have the greatest capacity to contact youth are parties and campaigns, and nothing would increase turnout as much as a robust competition for the youth vote.

Another contributor to the forum, Lisa Garcia Bedolla, also argues for personalized outreach, but Alan Gerber provides evidence that it is not hugely effective. I’d argue that outreach is particularly valuable for youth, who gain more than older adults do from information and encouragement, and who begin lasting habits of turnout. Finally, Jan E. Leighley and Jonathan Nagler make the case for being able to register on the same day you vote, which our research also finds beneficial for youth.