(Washington) And now for something different … My colleague Prof. Jonathan Garlick was a participant in last summer’s Institute of Civic Studies at Tufts’ Tisch College of Civic Life. After two weeks of wrestling with theorists like Jurgen Habermas and Eleanor Ostrom–along with fellow academics and practitioners from half a dozen nations–Jonathan summarized it all up in a rap:

“Now, Habermas’ and Ostrom’s inquiries
Are still a bit unclear to me
So let’s elucudiate these mysteries
By clarifyin their philosophies
Picture them both in a rap repartee
As they exchange views and realities
A civic rap battle of history …”

Here are the rest of the lyrics in PowerPoint.

We’re reading about Buddhist ethics in my Introduction to Philosophy course, and the Four Noble Truths are our focus. Here is how the first Truth is presented in the Sermon at Benares (attributed to the Buddha himself):

Presumably “this” does not refer simply to the preceding factual claims. The Truth is broader than that; the claims are illustrative or supportive. My instinct is to translate the final sentence into a proposition, a statement or assertion that expresses a judgment or opinion. I don’t think my instinct is uniquely “Western” (whatever that means) or philosophical. Buddhist thinkers have been debating the propositional content of the Truths for two millennia. This debate persists because it’s not self-evident how to restate the Truths as propositions. Should we say: “All life is intrinsically suffering”? “All human (or sentient) life is intrinsically suffering?” “All life includes some suffering, even if there are also happy moments”? “All life begins and terminates in suffering”? Etc.

This choice seems worth debating; the resulting conversation is fruitful. But there is also a good reason for the final sentence to take the form that it does. To assent to a proposition about suffering will not change your life. Your life may change if you really internalize the significance of suffering. In that case, you will understand the “truth of suffering.”

It’s like saying that social injustice in the US is not just a list of injustices. It is an overall condition of the society that you can absorb until it influences your whole stance toward politics. Whether you should take that stance depends on all the separate propositions about particular injustices, so you should evaluate those propositions critically. The (ostensible) Truth of Social Injustice is debatable among reasonable Americans. But the question is whether you should–and whether you have–absorbed that truth.

The Buddha’s way of thinking reminds me of Epicurus and the other founders of Hellenistic schools. Epicurus’ Letter to Menoeceus includes a formal argument that we should not fear death. Death is a lack of sensation, so we will feel nothing bad once we’re dead. To have a distressing feeling of fear now, when we are not yet dead, is irrational. The famous conclusion follows logically enough: “Death is nothing to us.” (Note that this is a proposition.) But Epicurus knows that such conclusions will not alone counteract the ingrained mental habit of fearing death. So he ends his letter by advising Menoeceus “to practice the thought of this and similar things day and night, both alone and with someone who is like you” (my translation). The main verb here could be translated as “exercise,” “practice,” or “meditate on.” You will be better off if you internalize the truth concerning death; but that takes practice, and it requires a community of people devoted to the same end. The same is true, it seems to me, of the Four Noble Truths of Buddhism.

The 2016 Annual Conference on Citizenship is co-hosted and co-planned by my colleagues and me at the Jonathan M. Tisch College of Civic Life at Tufts University and will specifically focus on issues of diversity, equity, and inclusion in civic life. Unless we make progress on these issues, we cannot move our country forward.

This year’s conference will be interactive; the whole group will think together about what civic life in America would look like if it strove for equity, diversity, and inclusion.

Participants will help shape the agenda for civic renewal in America and will leave with contacts and practical ideas to strengthen their own work.

During the day, we will work together to revise and improve our collective understanding of civic life. The map below will be a starting place. 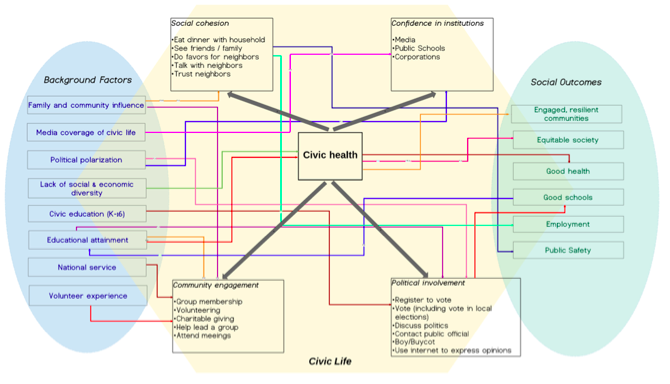 On the left are factors that may affect civic life, for better or worse. In the middle is “Civic Health” as it has been measured by the National Conference on Citizenship (NCoC) and its partners over the past decade. Civic Health has four major components that radiate out from the center. On the right are valuable outcomes of having a healthy civic life, such as resilient communities and good schools.

The arrows show connections uncovered by NCoC, Tisch College, and others. For example, we know that k-12 civic education can boost political involvement, that communities with more political engagement have better schools, and that good schools boost educational attainment, so all of those boxes are connected with arrows.

This is just a start, and during the day, we will ask participants to add, edit, or move boxes and arrows to help build a better diagram. We will also ask you to place yourself on the map.

There will be opportunities to hear from inspiring and well informed speakers. Click here to view the agenda at-a-glance.

Please join us for this important convening and invite other colleagues whose voices need to be heard. Register today!

It flabbergasts many people to learn that more Americans view Trump rather than Clinton as “honest and trustworthy” (35% versus 33%), even though we can read in The New York Times, “A Week of Whoppers from Donald Trump”; in The Washington Post, “Trump’s Week Reveals Bleak View, Dubious Statements in ‘Alternative Universe‘”; and in The Los Angeles Times, “Scope of Trump’s Falsehoods Unprecedented for a Modern Presidential Candidate.”

In philosophy school, you learn to make distinctions, and I think two distinctions may be useful for interpreting the public’s response. First, “truthfulness” can mean: My own view would be something like this: Truth-seeking is an important virtue for political leaders. It raises the odds that leaders will know the actual truth, although I’d forgive any human being for making errors if she demonstrates both commitment and skill in her truth-seeking.

Politicians should also demonstrate some candor. To struggle to know the truth and then to say something less than, or different from, the truth in public is not very democratic. On the other hand, politics isn’t a seminar room, a lab, or a witness stand in a court of law. Other political virtues may conflict with candor, such as tact, diplomacy, privacy, national or global security, and sheer effectiveness. A political leader must strive to enact and change policies, and it can undermine her effectiveness if she says everything she believes. I am pretty sure that’s why Clinton talks as she does, but because many people equate truthfulness with candor, she pays a price.

It’s also worth distinguishing between …

I believe that Hillary Clinton’s center/left ideology is much more defensible than Trump’s authoritarian ethno-nationalism, but that requires arguments rather than empirical data; and other positions are more defensible still than Clinton’s.

I am also inclined to think that Trump is pretty candid about his own ideological position, although he fails to acknowledge its implications (which is a fault of his truth-seeking). I am not sure how candid Clinton is about her ideology; that is hard to assess from afar. I’d argue that center-left American politicians exhibit a general lack of ideological candor because they presume that many beneficial policies are unpopular. For instance, it would be wise to borrow and spend on infrastructure, but you can’t say that because the American people don’t trust government. It would be desirable to standardize curricula and tests because in lots of communities, parents are creationists or otherwise misguided, but you’d better not say that because those people vote. I’d posit that Clinton struggles to attract trust in part because she belongs to a whole ideological bloc that has struggled since the 1970s to present itself candidly to the electorate.

Myung J. Lee, the executive director of Cities of Service, and I have an article in the Stanford Social Innovation Review that is free to read or download until November 17.

We define citizen engagement as a combination of deliberation (communicating and learning about issues), collaborative action, and the working relationships that form during such interactions. We summarize a growing body of literature that finds that citizen engagement–so defined–is crucial to addressing the most stubborn social problems.

But the harder question is always: How can America get more civic engagement? Who would be motivated to expand the number and breadth of active citizens or to make their work more consequential?

In the SSIR piece, we propose one answer. Municipal governments have much to gain by enlisting more citizens in more consequential civic work. This serves their self-interest. Furthermore, many cities already have thousands of citizens involved in organized volunteering efforts. Volunteering, by itself, does not have the positive effects that we find from citizen engagement understood more broadly. But all those volunteers are expressing a willingness to take action. Municipal governments are capable of turning ordinary volunteering into opportunities for deliberation about issues, collective action, and sustained relationships (including relationships among government officials and other citizens in their communities).

One of several ways that governments can achieve this shift is by helping citizens to set measurable targets for change at the community level and providing them with the data they need to assess progress. Unpaid citizens are not responsible for achieving these outcomes on their own; they collaborate with city employees and people from other sectors and hold each other accountable.

In the article, we offer several promising examples of what we call “impact volunteering” in US cities. We highlight cases from the Cities of Service network–which I strongly endorse–but our argument is meant to apply more broadly as well.