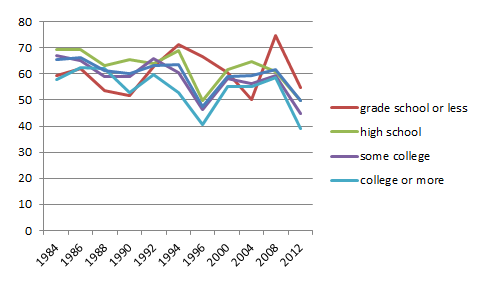 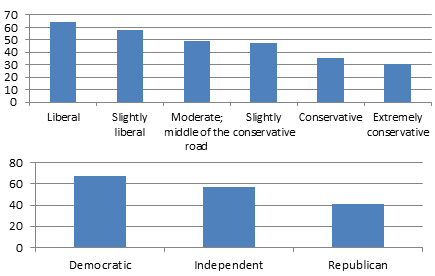 This new article explores reasons that k-12 athletics may boost civic engagement, as well as some important differences between sports and civic life. Student associations in general teach civic skills, and sports are best understood as examples of associations. Indeed, high school teams should be more like standard school clubs, in which participation is voluntary and the students are primarily responsible for managing the group.

Federal Judge Judge Thomas D. Schroeder has upheld a whole series of voting laws in North Carolina that, in my view, create barriers to participation. The plaintiffs included the NAACP, the League of Women Voters, and the United States Department of Justice. My colleague Kei Kawashima-Ginsberg and I submitted expert testimony about the impact of the laws on youth. We were both deposed in the case, and I testified in federal court last summer. I don’t have an informed comment on the judge’s decision, much of which concerns matters of constitutional interpretation on which I do not claim any expertise. It’s a disappointing result, but the struggle for equitable and accessible voting continues.

We spent last week visiting prospective colleges with my daughter, which is why I was offline. The information sessions and tours are very well done but they do tend to blur because of institutional isomorphism. If you’re getting sleepy on your umpteenth tour, try playing this Bingo game: 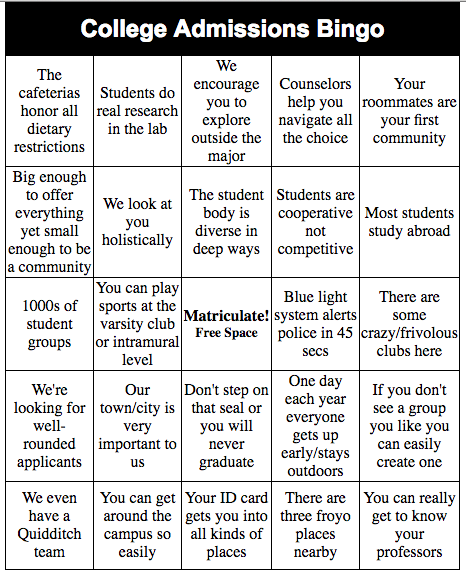 “We have simplified our admissions criteria to two numbers: your combined SAT score and your family’s net worth. If the multiple of those figures exceeds 16 billion, you are in. If it is between 160 million and 16 billion, you’re on the wait list, and we will work our way down until the budget is balanced. Below that, we’ll bank your application fee.

“Because we use these two very different metrics, we admit a diverse student body. Some students are rich but not too bright. Others have awesome standardized test scores but are merely middle class. Once they enroll, these two groups are completely isolated and mutually disdainful. We’d love to find some students who could bridge our two subcultures and promote interaction, but we can’t seem to get any rich geniuses to attend.

“You pay up front for each semester, so it’s in our interest for you to drop out. Most courses are vast lectures with arbitrarily difficult exams meant to weed out the untalented or the merely unfortunate. Since a small number of oppressed junior professors teach huge numbers of students, the rest of the faculty is free to wander around at will.

“Majors are assigned randomly on the first day of freshman year, and all credits must be in the major. Students are encouraged to study abroad, at other US colleges, or indeed anywhere they like, as long as they continue to pay our tuition in full, on time, and in cash. Extensive information about our loan program, interest rates, late fees, and penalties are contained in the prospectus, pp. 1-73.

“You may find that you learn and grow the most by exchanging ideas with your peers in informal settings. Go for it. We don’t really need to hear about it.

“We care about our host community. You can find out the name of it from Google Maps. The townies live on the other side of that barbed wire perimeter.

“Choosing a college is a very personal matter, as each student is utterly unique and unprecedentedly wonderful. For our faculty and administrators, however, you are basically an undifferentiated mass. You pay us and leave us alone; we don’t bother you. It’s all part of our extremely special and deeply considered educational philosophy, which has sustained us for 375 years and made our brand the envy of the world. Thanks so much and please leave your tips in the dish on your way out.”