Phillip Longman makes an extraordinarily important argument in an Atlantic article entitled “Why the Economic Fates of America’s Cities Diverged” (although I would be very curious what economic historians and other relevant experts think about it). Here is my restatement:

Carolyn Bouchard, a diabetic with a slowly healing shoulder fracture, hurried to see her doctor after Matt Bevin was elected governor here this month. Ms. Bouchard, 60, said she was sick of politics and had not bothered voting. But she knew enough about Mr. Bevin, a conservative Republican who rails against the Affordable Care Act, to be nervous about the coverage she gained under the law last year.

“I thought, ‘Before my insurance changes, I’d better go in,’ ” she said as she waited at Family Health Centers, a community clinic here.

Longman summarizes policies enacted to increase local control over business until 1970s–and their repeal since then. Consider, for example, the US Postal Service monopoly (which guaranteed equal prices and service for all addresses), heavy regulation of railroad, telegraph, and television companies, the Clayton Antitrust Act, the Robinson-Patman Act (against chain retail stores), the Miller-Tydings Act (against retail discounting), the Celler-Kefauver Act (antitrust provisions), Brown Shoe Co., Inc. v. United States (blocking a retail merger), and FCC regulations that mandated airline service to smaller markets and equal ticket prices per mile.

These were all policies that restrained national business competition but allowed geographical communities to compete against the big cities of the coasts. Once these rules were gone, capital became more mobile and consumers probably got the benefits of lower prices–but it became impossible to govern at the local level, and citizens were taught to be “sick of politics” because the politicians who were closest to them could no longer achieve much on their behalf.

See also: the Democrats’ problem is social capital; the European city as site of citizenship; and wealth-building strategies for communities.

Please save the date for Frontiers of Democracy: June 23-25, 2016 at Tufts University’s downtown Boston campus.

Frontiers is an annual conference that draws scholars and practitioners who strive to understand and improve people’s engagement with government, with communities, and with each other. The format of Frontiers is highly interactive; most of the concurrent sessions are “learning exchanges” rather than presentations or panels. We welcome proposals for learning exchanges for 2016. Please use this form to submit ideas.

You can enter your information here to let us know that you are interested in attending and to ensure that you receive additional information about the agenda and registering for Frontiers.

All are welcome at Frontiers, a public conference that follows immediately after the Summer Institute of Civic Studies, a 2-week seminar for scholars, practitioners, and advanced graduate students. The Summer Institute requires an application, and admissions decisions are usually made in May. Prospective applicants should sign up here for more information.

Shawn Ginwright is one of the best analysts of the #Blacklivesmatter movement. These are excerpts from his article “Radically Healing Black Lives: A Love Note to Justice“* that help explain what is happening in America today.

First, a great statement of why the movement emphasizes Blacknesss and yet is for all:

A love ethic is an unconditional desire for human dignity, meaningful existence, and hope. #Blacklivesmatter is a movement of dignity, meaning, and hope in a critical moment when race in general, and Blackness in particular, has become a third rail, and avoided in policy debates. The statement “Black lives matter” also gives others permission to practice courageous love and to celebrate and protect the dignity and humanity of all people.

And here is Ginwright on the double agenda–changing systems and healing people:

Healing justice is an emerging movement that seeks both (a) collective healing and well-being, and also (b) transforming the institutions and relationships that are causing the harm in the first place (Wallace, 2012). …

Young community leaders increasingly acknowledge that both organizing and healing together are required for lasting community change. Both strategies, braided together, make a more complete and durable fabric in our efforts to transform oppression, and hold the power to restore a more humane, and redemptive process toward community change. …

[By analogy,] environmental justice activists view policies that promote pollution and fossil fuels as harmful to the earth and our environment. Much of their activism focuses on protecting the environment from harm created by lack of awareness or concern for the natural environment. Similarly, healing justice activists view policies that promote violence, stress, hopelessness in schools and communities, as harmful to our collective well-being, human dignity, and hope. Rather than viewing well-being as an individual act of self-care, healing justice advocates view the practice of healing as political action.

CIRCLE has been soliciting and editing guest posts for the home page, which amount to short publications that reach the field of youth civic engagement pretty broadly. The latest call went out today:

CIRCLE is seeking proposals for guest posts to our website, civicyouth.org, focused on relationships between electoral engagement and civic life and democracy more generally.

Over the next year, a great deal of time and money will be spent on reaching voters—including young voters—in the U.S. We would like to convene a conversation about whether and how efforts to promote youth electoral engagement (e.g. voting, learning about candidate positions, volunteering for a campaign) help to increase the prevalence, equity, and quality of youth civic skills, attitudes and engagement generally. We define civic engagement broadly. Questions to discuss could include:

We are looking for proposals from a variety of perspectives, including people who run youth programs, researchers, funders, teachers, etc. We will consider proposals that share or reflect on qualitative and/or quantitative data, as well as program evaluations and reflections on programs and theoretical arguments. We will give preference to posts that discuss any connection to K-12 schools and curricula, households as settings for discussions or civic activities, or ways in which young people learn and practice being civic through cultural and peer influences. 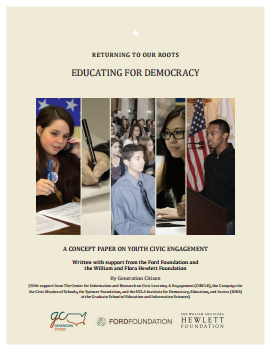 Released today is a strategy paper entitled Returning to Our Roots: Educating for Democracy. The authors are Generation Citizen plus a committee from other groups, including my CIRCLE colleagues and me. I’m pleased to have been part of the discussions that generated this paper. It is distinctive in that it puts political engagement at the center of civic education and addresses both schools and out-of-school opportunities.

Generation Citizens’ executive director, Scott Warren, also has a piece entitled “Student protests reveal thirst for a dialogue on democratic process” in the Hechinger Report. Scott uses this article to summarize the recommendations of the report.