I am on my way tomorrow to Lviv and Chernovitsi in Ukraine, to co-teach the Summer Institute of Civic Studies and Civic Education there. This will be an immeasurably small contribution to what I think is a great cause: the work of the Ukrainian people in constructing a true civil society as the basis of a true democracy. If they can achieve that task in a portion of the former Soviet Union–after a period of kleptocracy and violent repression–they will be a beacon for the whole region.

I won’t blog while traveling but will report afterwards.

By the way, an AP wire story yesterday used my trip as its opening example of US “scholars drawn to conflict zones.” I must emphasize that Lviv and Chernovitsi are far from any violent conflicts. Many colleagues at Tufts (and elsewhere) actually meet this description: “people who should be getting on a plane to go to a country that’s in crisis.” When I said that phrase, I had in mind professors who fly to Sudan or Iraq and really make a difference there. I wasn’t talking about myself going to Western Ukraine to help lead a political theory seminar for a few days. But I am excited and grateful to be going.

Civic Science is an emerging scholarly conversation, and today we held a discussion of it at Tufts. In my group, we agreed that scientists are not value-free but are indeed defined by certain values. We went back to the list of four values that Robert K. Merton identified in 1942. Per Wikipedia, those are:

These “CUDOS” norms emerge from the practices of actual scientists, yet they are  aspirational. In fact, they may be rarely honored in a given population of scientists, but they would still reflect the ideals of science. They thus provide tools for the critical assessment of actual science. 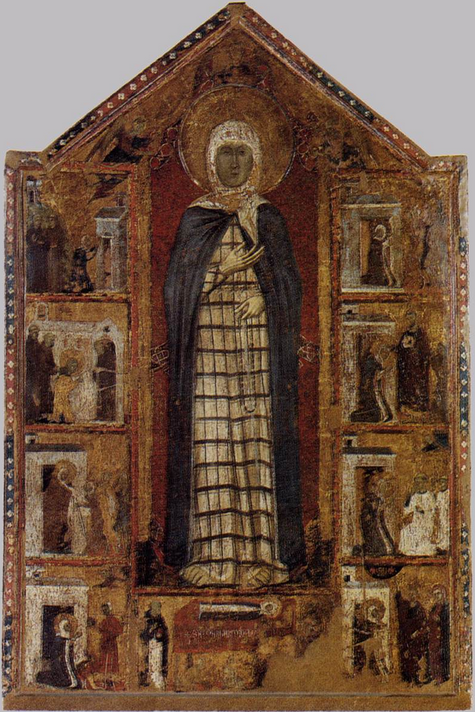 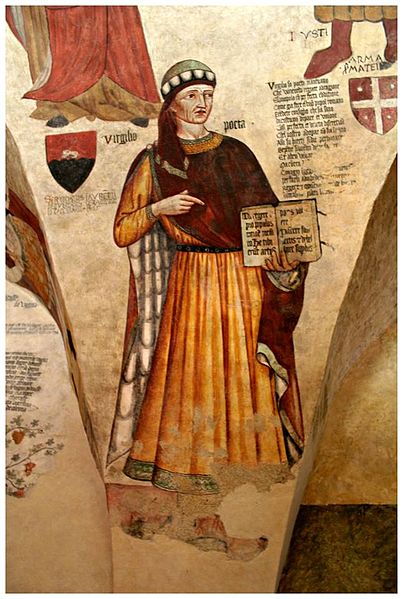 This is highlight #2 from our recent time in Italy. Lucignano is a small medieval town in Tuscany, notable for its street plan of concentric ellipses capping a steep hill. During the middle ages, it was contested by larger city-states, but it sometimes enjoyed a degree of independence or civic freedom. It certainly had its own town hall and, within that building, a Sala di Consiglio or council chamber.

At first, this room was decorated by one large fresco of the Madonna in Majesty. If I recall correctly, the inscription under her picture reminded Lucignano’s leaders to listen to both sides of every dispute. Then, between 1438 and 1475, the town’s councilors contribruted personal funds to cover the ceiling with frescoes of exemplary figures from history, each labeled with a name, and most accompanied by an instructive quotation. “Virgil the poet” is shown above.

Christiane L. Joost-Gaugier offers excellent background information on this decorative scheme.* It was not uncommon to depict heroes from the past (often known as “worthies”) in public spaces. And there was a very famous model of a council chamber decorated with frescoes about good (and bad) government in nearby Siena. But the Lucignano frescoes were unique in that the list of exemplary figures came from a specific source, Dante, who also provided many of the quotations painted on the ceiling.

Dante held an elaborate political theory that I will not attempt to summarize comprehensively here. But it seems to me that Lucignano’s civic elders borrowed the following elements of his thought for their council chamber:

People who thought in this way were liable to see themselves as appropriate heirs to the republican citizens of ancient Rome, capable of self-governance, obligated to sacrifice for the common good, and committed to the same law that had prevailed in Rome. This room is a vivid illustration of the idea that civic republicanism flourished in late-medieval Italy and came to the Atlantic world from there.

Below are my keynote remarks yesterday at …

The video is here:

I departed from the prepared text a fair amount in order to address the audience of civic innovators who had gathered in Austin. By the time I spoke, I knew more about their projects. These are the prepared remarks:

A presidential election cycle is a great civic ritual. Even though only about 60% of adults vote—when we’re lucky—a national campaign still touches most Americans in one way or another. It challenges us to consider fundamental issues. And it connects us to our political heritage, for many of the greatest moments in our political history have been presidential elections.

As the 2016 cycle heats up, what should we expect from this great national civic experience? What do we have a right to expect from the election?

The campaign must engage all Americans, without respect to wealth, social status, age, race, gender, disability, and political and religious opinions.

It must give all Americans equal weight and importance, honoring the fundamental principle of one person/one vote. It must make our leaders accountable to the people as equals.

The campaign must provoke a serious conversation about the most fundamental issues facing us as a country.

It must enlist our higher instincts. It is absolutely fine for citizens to retain their diverse political ideologies and their various and conflicting interests. But we must all be reminded of the more generous and idealistic aspects of our own views and interests—or what Lincoln called, after the fateful campaign of 1860, “the better angels of our nature.”

During a national political campaign, Americans must have respectful interactions with fellow citizens who hold different views from their own. The goal is not consensus but mutual understanding and an awareness that we are all legitimate participants in one great political debate.

Some of our interactions must be personal, in the sense that we get to know one another and can actually reply to each others’ ideas—whether online or face-to-face. In other words, it’s not enough to relate to politicians and other celebrities by following what they say. We must also relate to one another.

Citizens must see ways of acting on their political values that go beyond casting a ballot in November, important as that is. If, for instance, you are moved by the problem of climate change or concerned about moral decline, the campaign should inspire you to reduce carbon or to restore traditional values by working with neighbors and peers. The act of voting should be just one of the political efforts that you undertake as a result of the election.

Finally, a diverse set of new actors must see openings to enter political life, whether as campaign volunteers and staffers, independent activists, or reporters, artists, and bloggers. Presidential elections are entry points for new generations of activists and leaders.

I have described a national election in rather glowing terms, but we all know that the reality falls far short. END_OF_DOCUMENT_TOKEN_TO_BE_REPLACED