Today, CIRCLE released a new study entitled “Do Discussion, Debate, and Simulations Boost NAEP Civics Performance?,” by our lead researcher, Kei Kawashima-Ginsberg. The NAEP surveys a representative sample of 26,000 students. It asks them detailed questions about their civic knowledge, plus some items about what they have experienced in social studies classes. We find that students who have discussed current events, debated current issues, and participated in simulations (such as mock trial, Model UN, or iCivics) score higher on the NAEP. These pedagogies have other purposes, such as teaching young people to deliberate and interesting them in the news. The NAEP does not test those outcomes. Thus it is especially good news that these interactive teaching methods are associated with higher NAEP scores.

However, three concerns arise. First, upper-income students and White students are more likely to receive these experiences. Second, the expected patterns do not apply at the fourth grade level, where more discussion, debate, and simulation is associated with lower NAEP scores. And third, White and affluent students appear to benefit the most from these experiences.

I would guess that the fourth grade results can be explained by the extremely small amount of time allocated to social studies: about 1.7 hours per week. That may produce a real tradeoff: either learn to discuss current events or learn the material tested on the NAEP Civics (such as the Bill of Rights).

The unequal impact of these practices at 8th and 12th grade requires more attention. We often see the opposite pattern–disadvantaged young people benefiting more from good education, because they don’t get the same experiences elsewhere. It could be that the quality of these pedagogies is worse, on average, in schools that serve low-income and minority youth.  Or perhaps the curricular modules are not culturally appropriate–for example, if the topics that the kids debate are more relevant in suburbia than in the inner cities. Or perhaps we were unable to account for other factors in the local environment (such as bad governments) that reduce the impact of civic education.

In any case, these practices do benefit all groups at the 8th- and 12th-grade levels, so they should be encouraged and supported.

One of the stresses of modern office work is being called to do more than one thing at the same moment. How painful to decline an important meeting because another event has been scheduled simultaneously, and how often the scheduling process creates intricate moral tangles. But not for Ralph Waldo Emerson:

That is not what I would write in an apologetic response to a Doodle or Meetingwizard request, but I admire the sentiment. Of course, in the same essay, Emerson also suggests a deeper aversion to being helpful in the customary ways: “A sympathetic person is placed in the dilemma of a swimmer among drowning men, who all catch at him, and he give so much as a leg or finger they will drown him. … In this our talking America we are ruined by our good nature and listening to all sides.”

In Reasoning: A Social Picture, Anthony Simon Laden (who’s visiting Tufts today) argues that there’s a “standard picture of reasoning” in which the goal is to reach conclusions. You can reason alone, but when people reason together, they assert propositions, back them up with reasons, and strive for assent. Success means reaching a conclusion as reliably and efficiently as possible.

Laden argues that this picture cannot make sense of a valuable and pervasive kind of reasoning that is quite different. Sometimes when we reason, it is not to reach a conclusion but to engage in an activity with someone else that strengthens the relationship, whether that is a civic bond, a friendship, or a romantic or familial tie. I reason with you to learn what you think, to share my views with you, to seek whatever common ground we can, and to see if we can live together rather than in parallel. A characteristic activity of this kind of reasoning is not asserting that P, but inviting a response: What do you think–can we agree that P? Reasoning is “responsive engagement with others as we attune ourselves to one another and the world around us.”

Just as there are good and bad arguments that P, so there are good and bad ways of reasoning together in Laden’s sense. But some of the norms are quite different. A particularly strong argument is one that ends the discussion. But a particularly skillful conversational invitation is one that prolongs the discussion in ways that satisfy both parties. Laden says that his view is anti-foundationalist, because one unhelpful kind of reasoning involves asserting beliefs as bedrock, self-evident, or transcendent. If someone asserts that Jesus is his personal savior, that all history is the history of the class struggle, or that science produces the only truths, that ends the conversation and so makes the individual less reasonable, on Laden’s view.

Here is where I prefer my own account of moral thought as a network of beliefs connected by various kinds of ties (not just logical entailments, but also empirical generalizations, rules-of-thumb, and family resemblances). I don’t think we can declare a person unreasonable because he holds strong commitments. None of the beliefs I listed above happen to persuade me, but I am equally fixed on other beliefs, such as my love for my own family. The fact that I am not really open to discussing that doesn’t render me unreasonable.

But to converse reasonably with others, it does help to have a moral network map with certain features:

1. You shouldn’t keep returning to a few nonnegotiable principles. It’s fine, for example, to hold religious beliefs as a matter of faith. But if you constantly and immediately cite those beliefs, it’s impossible to reason with you. To put the point in network terms, your map can include nodes that are fixed points, but they ought not carry all the traffic. It should be possible to route around them.

2. You should have more beliefs rather than fewer. It is easier to converse with someone who has many interests, commitments, and ideas, because these are points of contact. Such a person is like an organic molecule with lots of surfaces for other molecules to bond to. Yet,

3. Each belief should connect to others in ways that you can explain. That way, to engage me on my belief A provides an entree to discussing my beliefs B and C. If many of my beliefs and commitments are singletons (in network terms), the conversation quickly dies.

Network analysis helps us see what makes a good conversationalist, but it does not show that being a reasonable conversation-partner is morally valuable. Perhaps it is more important to be good and right. That is what people typically say when they have neatly organized and simple mental networks that revolve around a few nodes, whether God, science, liberty, nature, or something else. They say: “It’s all very well to reason civilly and responsively with other people, but what really matters is my belief P.”

Well, it could be true that P. For instance, it could be true that God has laid out all the commandments for how to live, and we’ll see that for certain in the next life. But in this life, I don’t know how we can know that P except by reasoning with other people. Conclusive arguments are scarce in the moral domain; mainly, they are refutations of particular views that turn out to be inconsistent. But although conclusive arguments are scarce,  we come to believe things collectively by discussing them. When the discussion is inclusive, fallibilist, and responsive to everyone’s contributions, the results are better. I am not quite sure whether reasonable conversations increase the odds that we reach the right conclusions, or rather that we create something desirable when we make our moral world by reasoning together. (In other words, I am not sure whether to characterize the activity as discovery or creation.) But the practical conclusion is the same either way. It is most important to be a reasonable interlocutor. That does not rule out holding fixed beliefs, but they must supply just some of the nodes in your moral network, and they cannot be overly central.

Aaron Smith of the Pew Internet & Public Life Project has released a new report based on Pew’s polling that provides the best current information on how we use the Internet and social media to engage in politics. These are some points that struck me as especially interesting:

I am always worried about over-reporting in surveys of civic behavior–our own as well as other organizations’. One way to test the level of over-report is to ask respondents whether they voted, because we know how many ballots were actually cast. This survey was conducted last summer, before the election, so turnout could not be measured. But respondents were asked whether they were registered to vote, and 75% said they were. The official voter registration rate in November was around 70%, but that may be an overestimate because Alaska, Colorado, Maine, Michigan and Mississippi actually count more people as registered than they have eligible resident citizens. (Citizens who have moved or died are still on their rolls.) Also, many people register after the summer of an election year. So the 75% registration rate reported in this Pew survey is high. It suggests either a bias in their sample toward active citizens or a social desirability bias that causes people to claim they engaged when they did not. These problems are absolutely typical in our business, and I am always more interested in differences within a poll than what we would call the “point estimates” (e.g., “39% of American used Facebook or Twitter for political purposes”). But if you want to estimate the rates of online civic participation, I would cut the reported numbers down by a quarter or so. They remain pretty impressive.

They said, the ancients, that poetry
is a ladder to God. Maybe it’s not like that
when you read mine. But the day I knew it,
that I had recovered my voice through you–loose
as I was in a flock of clouds and goats
crashing out of a ravine to graze on dribble
of thornbush and bulrush, and the lean faces
of the moon and sun were fusing together–
that day the car broke down and an arrow
of blood on a boulder marked the road to Aleppo. 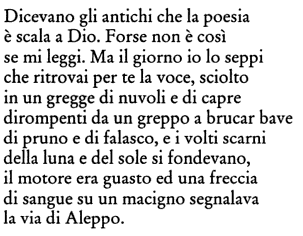