As described in this slide show, we have been working with college students at Tufts and UMass Boston to build one elaborate “network map” of civil society in the Boston area. The map already has many hundreds of nodes and links; we need to improve the visualization tools so that users can make more sense of the data.

Meanwhile, it has always been our goal to make the map accessible by means of simple applications for Facebook and MySpace. I now feel a little clearer about what those apps. should look like.

On my own Facebook page, I would see a little segment of the Boston-area map with myself at the center and my civic connections around me: 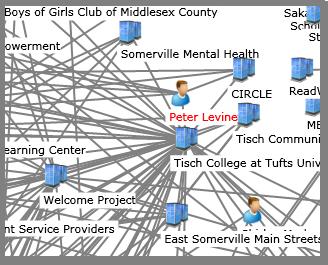 Each of those nodes would be clickable so that anyone on my Facebook page could open them up and see the contact information, mission statements, etc. Moreover, when one clicked on any node, the map would reconfigure to put it in the center, with all its links around it. Thus one could “browse” through Boston’s civil society. One could also search the whole map and put the main search result right in the middle. And one could use the tool to find the shortest path between any two nodes. For instance, if I ever need to talk to the Somerville Mayor’s Office, there’s a path for me via Tisch College and then Tisch College Community Advisers board. This is therefore a tool for community organizing.

My hometown of Syracuse, NY was disfigured when interstate highways were blasted right through its heart, between the university and downtown, flattening a neighborhood that had once been home to moderate-income African-Americans. Their strong web of churches, businesses, and other associations reached back to the time of the Underground Railroad, when Syracuse had been an important center of Abolitionism. In place of this old neighborhood, there appeared bleak expanses of tarmac and a modernist museum by I.M. Pei that showed no regard for its context. The city’s population has since fallen–more because of de-industrialization than urban “planning”–and now many of its fine old Victorian homes are abandoned and boarded up. There’s even a program under which the municipal government removes condemned houses and gives the property to the neighbors so that they can have suburban-sized yards. 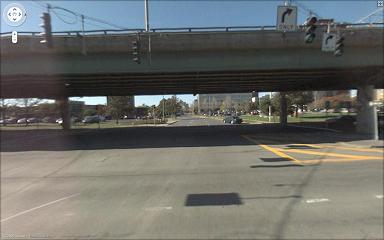 Above is a major Syracuse cross-street, with Interstate 81 right through it. I know this is fanciful, but what if we put glass walls on either side of the space under the highways and filled it with plants? Syracuse is a very cold place–often the snowiest city in the whole country. Imagine warm, green, spaces for recreation under those highways. If the area became attractive, the neighborhoods on either side might fill again, taking advantage of scattered Victorian relics. 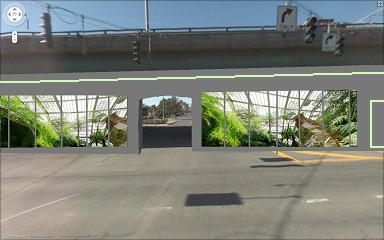 (With apologies for my poor perspective and draftsmanship.)

The Census has released its 2008 voting data, which is the basis of a fairly detailed new fact sheet by CIRCLE. We find that the turnout of under-30s rose to 51.1 percent. For under-25s, the turnout was 48.5 percent. These rates are considerably above the levels we saw around 1996-2000.

I’m an optimist, so I’ll say that the glass is half full. (In fact, we beat the half-full mark by 1.1 percentage points.) We no longer see a steady decline since the 1970s: now the graph seems to suggest that roughly 50% turnout is the norm for American youth, and the late 90’s were an exception on the low side.

But the gaps in turnout were large in 2008. About 36 percent of young people with no college experience voted, compared to a 62 percent rate for young people who have attended college. Only about half of young adults go to college.

There was also a partisan gap, although that cannot be directly measured using Census data. Since 66 percent of young voters chose Obama/Biden, it’s likely that conservative youth tended to stay home. That would account for why turnout didn’t rise more in ’08.

There’s much more in the fact sheet.

If you Google terms like “Obama” and “community service,” you will find a very large number of conservative blogs and opinion pieces claiming that this is Obama’s “brown shirt” corps. They fear that young people will be indoctrinated by “ACORN types” to spread socialism (even though I thought the original Nazi brown shirts beat up socialists). They also assert that Obama is taking a step toward mandatory service. Right now, if you Google “brown shirts” to find out about that Nazi organization, one of the top results is an attack on Americorps.

In reality, AmeriCorps is not a youth organization at all. It provides grants to a very wide range of nonprofits. Such a decentralized approach would be a poor strategy for building an authoritarian political movement, if anyone wanted to do that. There are also very strict restrictions on political activity by AmeriCorps volunteers. They cannot, for example, do nonpartisan voter registration or lobbying. And Obama’s nominee to head the agency that overseas AmeriCorps, Maria Eitel, worked for George H.W. Bush before she entered the corporate world as a Nike executive. Hardly a socialist.

So basically the right-wing fear of AmeriCorps is paranoia. A more troubling critique, in my view, comes from the left. Some left-liberals argue that by recruiting hundreds of thousands of young idealists to do community service that is formally insulated from politics, we will frustrate progressive politics for a generation.

I hear that argument, yet I think we need to be careful when we use federal funds for programs that influence young people’s thinking about social issues. That’s an appropriate goal if it’s about authentic learning and deliberation, but it could be distorted by political agendas. AmeriCorps will never become a brown shirt organization, but it could provide patronage or teach members to think narrowly about issues. Out of an abundance of caution, I would favor the existing limits on political action by AmeriCorps volunteers, I would bend over backward to make grants to religious and conservative groups, and I would constantly emphasize that this is not the first step toward mandatory civilian service. (There are philosophical arguments in favor of universal service. The crucial argument against it, in my view, is that it would be extremely costly and difficult to provide millions of high-quality service opportunities; and we could spend those billions better for other purposes.)

Our main message at CIRCLE is that young people benefit from opportunities to do civic work, but those opportunities (such as discussions of controversial issues, service-learning projects, student governments, youth organizing, youth media, community-based research) are very poorly distributed, so that those youth who need them least–our successful students–are most likely to get them, whereas those who struggle in school (or who attend struggling schools) are very unlikely to receive them.

I’ve got a piece entitled “The Civic Opportunity Gap” in the current issue of Educational Leadership, a magazine aimed mainly at administrators in k-12 schools. Northwest Education published an interview with me under the heading, “Civic Engagement for All.” Finally, several of my closest collaborators and I addressed civic equity in a panel at the American Education Research Association conference last week, and Education Week (the main trade journal) chose to cover our discussion. The Ed Week article begins, “The good news, according to researchers presenting findings here last week, is that after waning for years, civic participation among young people appears to be on the rise. The bad news is that students who are members of racial or ethnic minorities, who live in poor neighborhoods, or who are tracked into low-achieving classes get fewer opportunities to exercise their civic muscles than their better-off peers.”