Join Princeton’s Jan-Werner Müller (author, most recently, of What is Populism? which has been translated into more than 20 languages in two years) and Swarthmore’s Rick Valelly (author of The Two Reconstructions: The Struggle for Black Enfranchisement and many other books) for a discussion at Tisch College on Monday, April 23 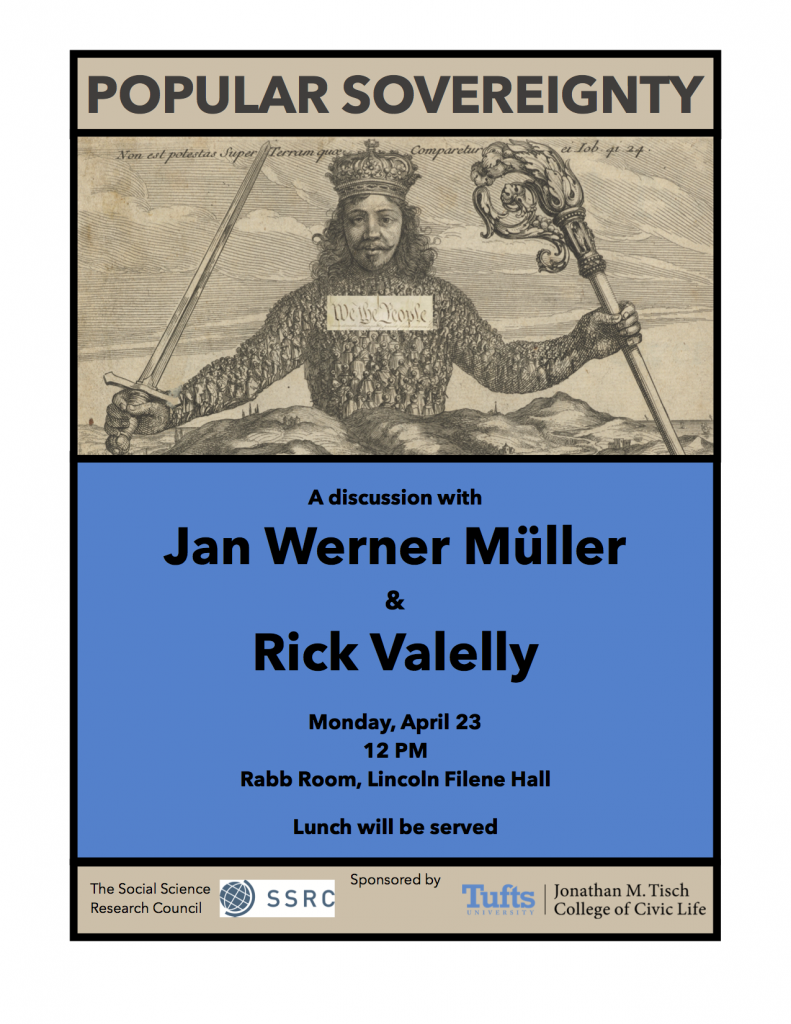 About $3 billion was contributed to influence 2016 federal campaigns. In a new paper entitled “Building Civic Capacity in an Era of Democratic Crisis,” Hollie Russon-Gilman and K. Sabeel Rahman suggest a much better way to spend some of that money.

I realize, by the way, that political donors want candidates to notice their support. It would nevertheless make all the difference if they gave one percent of their $3 billion to activities that strengthen democracy–compensating for irradiating the body politic with polarizing and demoralizing messages. Progressive donors would also build the base for more progressive policy by investing for the longer term.

Russon-Gilman and Rahman argue “that today’s populist moment emphasizes the need to create a genuinely responsive, participatory form of democratic politics in which communities are empowered, rather than alienated.” They advocate investments that “self-consciously strive to build constituencies and identities that are more inclusive and accommodating. Think of this as ‘us’ populism, as opposed to ‘them’ populism.”

These strategies imply (as the authors note) a broad understanding of democracy. It is not all about elections, nor even about the official government. It’s about how people come together and exercise power.

The paper offers valuable case studies. For instance, under the heading of organizing:

Examples under the heading of institutions include:

Overall, “Building Civic Capacity in an Era of Democratic Crisis” helps make the case for investments that are less short-term, less oriented to immediate efficiency, less split between government and civil society, but more experimental, more open-ended, and more truly inclusive than we normally see (especially, I would say, on the left).

See also: why the white working class must organize; to beat Trump, invest in organizing; fighting Trump’s populism with pluralist populism; and community organizing between Athens and Jerusalem.

This web search takes you to a whole stack of good recent writing about the Democratic Party as the technocratic party, with headlines ranging from Twilight of the Technocrats? to The Triumph of the Technocrats. In lieu of a critical review, I’d pose these questions:

See also: the rise of an expert class and its implications for democracy; varieties of neoliberalism; the big lessons of Obamacare; the new manipulative politics: behavioral economics, microtargeting, and the choice confronting Organizing for Action; and why the white working class must organize.

Some of these might be classified with the left, and others (notably, tax protests and religious fundamentalism), with the right. In retrospect, it is debatable whether they formed a meaningful category or could be distinguished sharply from the “Old” social movements, such as labor unionism and civil rights in the USA.

My view is that these movements did represent a new stage of politics in the wealthy democracies. That stage has passed, however, as new problems have come to the fore and as the social movements of ca. 1968-1985 have become institutionalized in the nonprofit sector, thus losing their emancipatory role. These changes mean that it’s important to compare our time with the 1970s and early 1980s and to envision productive combinations of the Old and New Social Movement forms.

END_OF_DOCUMENT_TOKEN_TO_BE_REPLACED

View #1: The same two parties have alternated power since 1854 and will continue to do so for the foreseeable future. Today, the most serious threat to small-d democratic norms and institutions comes from the Trump Administration, and the Democratic opposition is an essential counterweight. A Democratic House in 2018 could begin serious investigations; a Democratic president in  2020 would end the Trump era. You may or may not agree with the platform of the Party, but it’s a big tent, and you have your choice of intraparty factions to back, from Sen. Manchin to Sen. Warren. Moreover, any Democrat would endorse positions on some issues that are preferable to those of the Trump Administration. The Party is accountable to communities most threatened by Trump: for instance, half the voting delegates at the Democratic National Convention were people of color. That fact pushes the Party to defend basic rights for all. The Democratic Party is a bulwark of democracy; it must win the elections of 2018 and 2020.

View #2: At the root of our problems is partisanship. Most of us (including me) use partisan labels as heuristics for assessing policies, candidates, news sources, and opinions. As a result, we are prone to misunderstanding the situation and demonizing half of our fellow Americans. “Partisanship is a helluva drug.” What we need is less reliance on party labels and more cross-partisan or non-partisan dialogue. Maybe it would be better if more Democrats won elections, but that is up to the Party apparatus and should not be our focus as concerned citizens.

View #3: The party duopoly stands in the way of progress, for reasons specific to our moment. Once industrial unions declined and working-class whites migrated to the GOP, we were left with two parties controlled by economic elites. Main Street business interests and extractive industries like coal and oil control the GOP, drawing votes from working-class whites who are not likely to see their interests served. Highly educated coastal elites control the Democratic Party, with votes from people of color who have no better choice. The result is hard-wired neoliberalism, with modest distinctions between the parties on civil rights and environmental regulation. Democracy (in the sense of government that responds to mass economic needs) requires a major reorientation of the whole duopoly. Trump actually enables that in a way that Hillary Clinton could not, in part because of his potential to blow up his own party.

For those keeping score, these three views are most consistent with the first, sixth, and second boxes in my flowchart (below). They can be posed as stark alternatives, demanding a debate. But it’s possible that they all contain truths and that we need people working on all three. 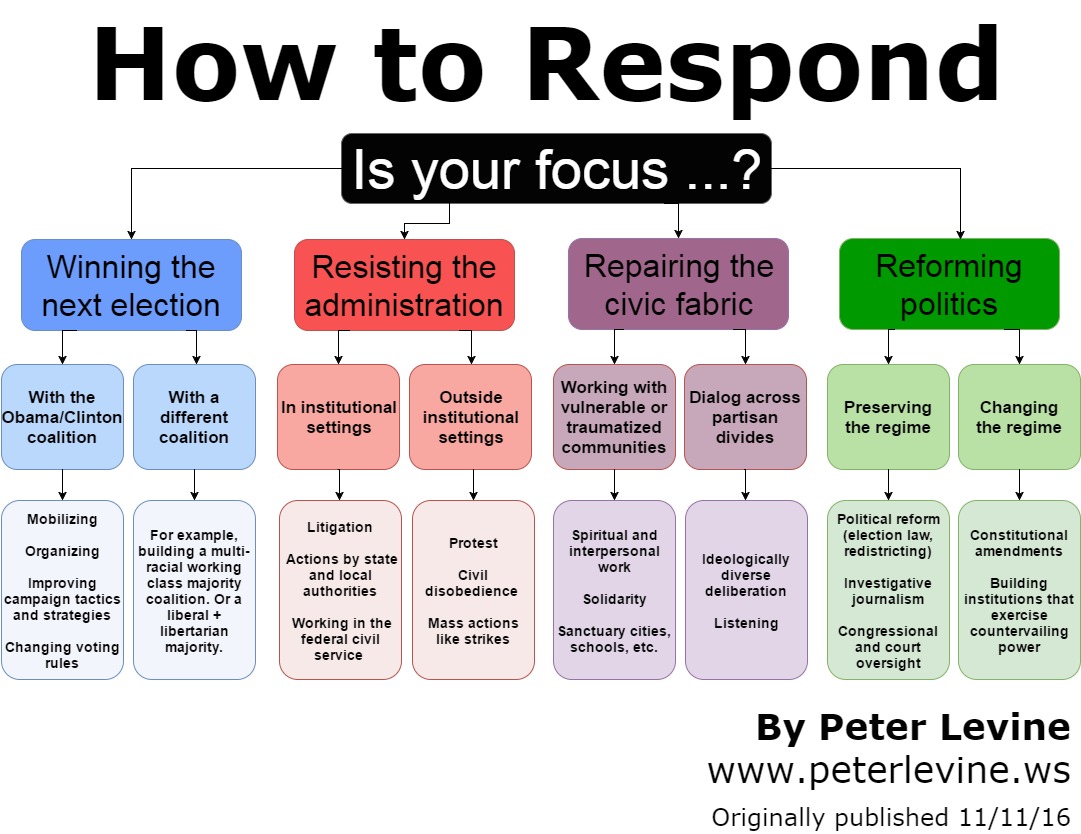