In 2009, when Democratic House members went home to discuss the Affordable Care Act with their constituents, they faced disruptive questions and protests, often from people loosely affiliated with the Tea Party. The protesters cited such supposed evils as Death Panels. This year, when Republican House members go home to discuss repealing the same legislation, they face disruptive questions and protests from supporters of the ACA. In at least one case, a Member of Congress decried the Death Panels that are supposedly now in existence and was hooted down as a liar by his constituents. In both 2009 and 2017, many Members of Congress have decided not to hold so-called Town Meetings at all because of the prospect of protests that would be covered on mass media. 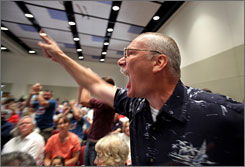 I was prone to lament the protests in 2009 but welcome them in 2017. That sounds like hypocrisy, but the comparison is more complicated. First, the same behavior can be appropriate or inappropriate depending on its purpose and content. Making such distinctions requires judgment, but judgment is essential in politics and is not merely a form of bias. In other words, the right judgment may be that the protests of 2017 are helpful even though those of 2009 were harmful. One reason may be that the protesters of 2017 are speaking truth, and those of 2009 were repeating lies. I acknowledge that’s a simplification, but it may be roughly correct.

Second, if we treat a political act (such as organizing or disrupting a public meeting) as a general category, without reference to its purpose or outcome, we still must weigh several values. Disrupting a meeting is bad for civility but may enhance free speech and agency. Only a purist about civil dialogue would automatically oppose any form of disruption.

I took a somewhat unusual position in ’09. I argued that deliberation–i.e., genuinely listening and being open to changing one’s mind–plays an important role in a democracy. When protesters shut down events sponsored by Democrats, or when Democrats stopped holding open meetings in fear of protests, deliberation suffered. This was a shame because we are all badly limited, morally and cognitively, and we need opportunities to hear from the other side.

However, I said then, a major cause of the disruption was the design of these events. In a truly deliberative event, such as a classic New England Town Meeting, the participants make a collective decision that is not pre-determined by the organizer. To make such a discussion go well requires rules that give people and arguments equal time and organize the debate. An event that is billed as a “Town Meeting” is a fake deliberation if the politician-organizer has already made up his or her mind and just wants to persuade the audience. Giving members of the public a chance to react for a minute at the mic. is a recipe for angry responses. Such meetings are so predictably bad that they provide frequent moments of comedy on Parks & Rec:

The solution would be to reserve events that are billed as deliberative for genuine deliberations. Citizens would be invited to discuss and design solutions, and the organizers would be open to any outcomes. An example is our successful recent experiment with a Citizens Initiative Review in Massachusetts.

When, on the other hand, a representative already holds a position on an issue and wants to persuade the public, she or he is entitled to screen the audience, to talk only through the media, or otherwise to control the format. At the same time, opponents are entitled to exercise their rights of assembly and petition to argue the opposite position. If the politician chooses to speak in an open room, then she should expect disruptions. If the politician screens the audience, she should expect people outside with signs.

Several additional issues arise for me: