Matthew Yglesias draws attention to a study showing that if you were wealthy in Florence in 1427, there is a statistically significant greater chance that your descendants are wealthy in Florence today (where “wealth” is defined as your relative standing atop the economic hierarchy of your own time). I’ve had the chance to live in Florence and have observed that the local aristocracy of the present bear the same names that grace the elegant chapels and palaces of the 1400s. This persistence should surprise us, however, because Florence has gone through tremendous political, economic, demographic, and technological change over the past six centuries.

Yglesias also cites evidence that people who have noble surnames in Sweden have above-average wealth today, even though Sweden stopped ennobling families in the 16o0s and has now had a century of democratic socialism. Yet you’re still likely to be wealthier in Sweden today if your paternal ancestor was an aristocrat in 1650. 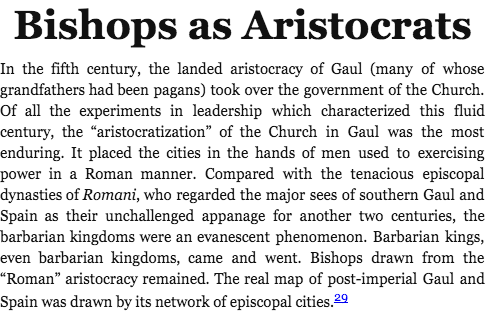 You would think that after barbarian invasions, the collapse of civilization as it was known, the replacement of aristocratic paganism with a radical religion of equality, and the rise and fall of barbarian kingdoms, the old pagan Roman landowning families would have slipped a notch or two. On the contrary, they seem to have morphed into powerful and wealthy bishops in Merovingian Gaul. Brown doesn’t trace the story after that, but it wouldn’t surprise me to learn that the provincial gentry of today’s France descend from these bishops’ families.

We needn’t be fatalistic. Societies change, often for the better. But it’s interesting that neither a radical Millenarian religion nor socialism–nor invasions and civilizational collapse–necessarily interrupts the transmission of advantage from one generation to the next. I presume that social and cultural capital can survive immense disruptions of physical capital, or–to put it more bluntly–people who know how to play one system make sure that their kids do well in the next one.