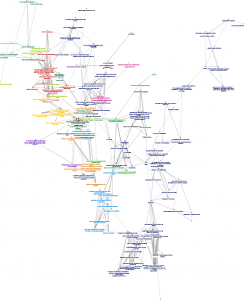 I like to ask people to state their own beliefs that are relevant to ethics and then draw connections among those ideas to create networks that represent their moral worldviews. I put people (students and others) in dialogue with each other, invite them to explain their networks to peers, and watch connections form.

Usually the ideas that people propose are not precise. In explaining what we believe, we don’t employ many terms that we could define with necessary and sufficient conditions, nor do we often use quantifiers like “all” or “exactly one.” The connections we detect among our ideas are rarely logical inferences. They are looser links: resemblances, rough implications, empirical generalizations.

One impulse is to strive for as much precision as possible. That is a fundamental goal of analytic moral philosophy and it has significant merit. If someone proposed, “We should strive to improve everyone’s lives,” I would join mainstream analytic philosophers in requesting more clarity. Does that mean maximizing net human welfare? Does “welfare” mean happiness, satisfaction, or objective well-being? Does it trade off against freedom and autonomy? Does “everyone” mean all currently living human beings? (What about future generations?) Does “strive” mean actually maximize net welfare, or have a generally beneficent attitude toward others? These are valid and hard questions.

On the other hand, if the goal is descriptive moral psychology, it is a mistake to ask for that level of precision. We all hold–and are motivated by–rougher moral ideas and looser connections than could pass muster with an analytical philosopher. If you want to know what people believe, you must model those ideas and relationships as well as the clear ones. If you encourage people to map out many of their ideas and relationships, they will produce complex and elaborate networks that are useful for representing their mentalities and for provoking reflection.

That still leaves the normative question: how much precision should each of us strive for? I would say some but not too much. One of my favorite quotes is from Bernard Williams, in Ethics and the Limits of Philosophy (1985, p. 117): “Theory typically uses the assumption that we probably have too many ethical ideas, some of which may well turn out to be mere prejudices. Our major problem now is actually that we have not too many but too few, and we need to cherish as many as we can.”

I’d expand that remark as follows: Through direct and vicarious experience, we build up collections of moral ideas that give our lives meaning and restrain our basest instincts. We also connect our ideas; we say that we believe A because it seems somehow related to B. If we must pass all these ideas and connections through a screen for clarity, precision, and inferential rigor, most will have to go. That will leave us with less meaning and less constraint against mere inclination and will.

Seeking clarity can illuminate. It can, for instance, force us to disaggregate a vague idea into a set of related ideas that are worth seeing on their own. Or it can reveal gaps and tradeoffs that deserve consideration. Formal philosophy is also useful for developing specific ideas that are clear and precise and that relate to one another logically.

However, it is a false dream that we can convert our entire networks of moral ideas into structures of clearly defined concepts and implications. Even the best moral arguments carry just a short distance–from a premise to a conclusion, or maybe as far as another conclusion or two, but not all the way across the domain of the moral. It is good to have a dense, complex, and expansive network of ideas that draws on experience and demands constant reflection and reevaluation, even if its components are a bit vague and the links are hard to articulate. Better that than a crystalline chain of reasons that connects just a few ideas and leaves us otherwise free to be selfish or fanatical.