The American Enterprise Institute has released a new survey called “High Schools, Civics, and Citizenship: What Social Studies Teachers Think and Do.” I know four of the authors and respect their work in general as well as this particular survey.

Ideology is inescapable when we consider civic (a.k.a. political) education. AEI is generally seen as a conservative organization, but that does not mean that the report is biased or designed to reach conclusions convenient to conservatives. On the contrary, it rebuts the kind of sharp conservative critique represented by Chester Finn and colleagues in a 2003 Thomas B. Fordham Institute report entitled Where Did Social Studies Go Wrong?. Finn claimed that students emerged “from K-12 education and then, alas, from college with ridiculously little knowledge or understanding of their country’s history, their planet’s geography, their government’s functioning, or the economy’s essential workings.” The underlying problem, he asserted, was that social studies teachers had bad values. By the year 2001, he wrote:

in the field of social studies itself, the lunatics had taken over the asylum. Its leaders were people who had plenty of grand degrees and impressive titles but who possessed no respect for Western civilization; who were inclined to view America’s evolution as a problem for humanity rather than mankind’s last, best hope; who pooh-poohed history’s chronological and factual skeleton as somehow privileging elites and white males over the poor and oppressed; who saw the study of geography in terms of despoiling the rain forest rather than locating London or the Mississippi River on a map; who interpreted ‘civics’ as consisting largely of political activism and ‘service learning’ rather than understanding how laws are made and why it is important to live in a society governed by laws; who feared that serious study of economics might give unfair advantage to capitalism (just as excessive attention to democracy might lead impressionable youngsters to judge it a superior way of organizing society); and who, in any case, took for granted that children were better off learning about their neighborhoods and ‘community helpers’ than amazing deeds by heroes and villains in distant times and faraway places.

This assertion was not based on any data whatsoever. In contrast, the new AEI survey finds:

83 percent of the teachers surveyed [see] the United States as a unique country that stands for something special in the world. At the same time, 82 percent of survey respondents say students should be taught to ‘respect and appreciate their country but know its shortcomings.’ Despite all of the concerns about anti-American sentiment in schools of education, just 1 percent of teachers want students to learn ‘that the U.S. is a fundamentally

flawed country.’ This sounds, to our ears, like a near pitch-perfect rendition of what parents, voters, and taxpayers would hope for–schools where students learn that America is exceptional even as they learn about its failures.

In the AEI survey, 60% of teachers think it is “absolutely essential” to teach students to “follow rules and be respectful of authority.” Many fewer (37%) think it’s absolutely essential to teach students “to be activists who challenge the status quo of our political system and seek to remedy injustices.” Four out of five consider it absolutely essential to know the components of the Bill of Rights and to have “good work habits such as being timely, persistent, and hardworking.” One in five think that education professors are overly critical of the US; eight percent think those professors are overly appreciative.

The AEI results are consistent with our own finding that many more young Americans recall studying “great American heroes and virtues of the political system” than “racism and other forms of injustice.” I don’t necessarily object to the balance that exists in most American classrooms, but I do think leftists critics have more empirical basis for their complaints than conservatives have. If the ideological valence in our schools is wrong, it’s not that students receive an overly cynical account of American history but rather than real injustices are ignored.

That is the title of today’s blog post. The text is not here but on the Huffington Post. I co-wrote it with Scott Warren and Alison Cohen of Generation Citizen, and it’s about the civic achievement gap in high schools.

This fall, please join these four authors for discussions of their new books.

Henry Milner is a political scientist at the University of Montreal in Canada and Umeå University in Sweden, and co-editor of Inroads, a Canadian journal of policy and opinion

The American Way to Change: How National Service and Volunteers Are Transforming America

As special assistant to President Clinton for domestic policy, Sagawa drafted the legislation that created AmeriCorps and the Corporation for National and Community Service. After Senate confirmation as the Corporation’s first managing director, she helped lead the development of the new agency and its programs. She is co-founder of the sagawa/jospin consulting firm and Visiting Fellow at the Center for American Progress.

Fire in the Heart: How White Activists Embrace Racial Justice

Mark Warren is Associate Professor of Education at Harvard University. A sociologist, he is concerned with the revitalization of American democratic and community life. He is the author of several previous books, including Dry Bones Rattling: Community Building to Revitalize American Democracy.

Co-Sponsored by the Social Justice Initiative

The Wind from the East: French Intellectuals, the Cultural Revolution, and the Legacy of the 1960s

Richard Wolin is Distinguished Professor of History, Comparative Literature, and Political Science at the City University of New York Graduate Center. His previous books include Heidegger’s Children and The Seduction of Unreason and he writes regularly in Dissent, the Nation, and The New Republic.

Nansook Park and Christopher Peterson ask people to rank themselves on a battery of strengths that are “intellectual and self-oriented” (such as curiosity, judgment, and appreciation of beauty) and a set of “strengths that are emotional and interpersonal” (such as love, prudence, bravery, and hope). They find substantial differences in the average scores on these scales among U.S. cities. They also find that city-level differences matter for several important outcomes. 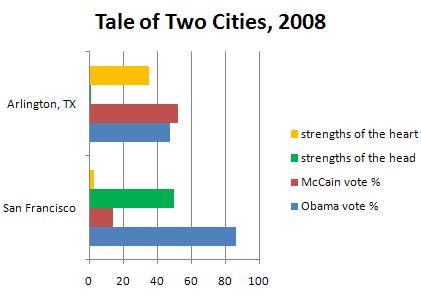 Some caveats would be appropriate. These are self-reported scores, so they may measure the perceived value of the various strengths, rather than their real prevalence in each city. The sample is not random, although the authors argue that it is representative. The relationship between the two virtues and voting outcomes might not be causal; it could be explained by some third factor. (It is not, however, the case that a particular virtue–such as faith–is mainly responsible for the results; the authors check for that.)

Caveats aside, these results seem plausible. America has hard-driving, competitive, creative, and cerebral cities that like Democrats, and warm, friendly, emotional, and devout cities that prefer Republicans. People move to San Francisco, Seattle, and Boston if they think they can succeed in research, consulting, or the arts, and they surround themselves with neighbors who would gag before voting Republican. People move to El Paso, Mesa, and Fresno because they want friendly neighbors and church picnics. They don’t necessarily vote Republican (cities in general tilt leftward), but they are far more conservative than their peers in the cerebral cities.

The Republican Party is supposed to be committed to competition and individualism; the Democrats, to solidarity and care. Yet the very cities that are most competitive and individualistic are most enthusiastic about Democrats. Maybe a caring government seems more valuable in San Francisco and Boston than in Arlington, TX.

I just finished three consecutive meetings that addressed versions of the same questions: How can universities prepare young people for active democratic citizenship? And how can such efforts be measured and assessed? The first meeting involved Tufts faculty from various departments. I either knew the participants before the discussion began or had network ties with them. We are part of the same organization, with a common work culture. We met in a room where I have spent hundreds of hours. I know exactly where this thoroughly familiar place fits in the broader physical space of Tufts, Medford, Massachusetts, America. We shook hands, helped one another to coffee, and watched each other’s faces as we spoke.

Then two young leaders (from the Sustained Dialogue Campus Network) met with me and a colleague in my own office. Now the space was quite small, piled with my own stuff, and extremely familiar to me–although not to my visitors. I understood their backgrounds and the broad outlines of their work lives, but I cannot picture their offices or exactly how they spend their days. The flow of conversation was fluid among the four participants. We talked about potential projects and next steps. We were getting to know one another, which is an important precondition of collaboration.

And then I went to a basement space with a video link, to participate in a virtual conference with colleagues from Tecnológico de Monterrey, a major Mexican university. Now I was in a strange underground room somewhere beneath a physical space that I know well. I was interacting with a face projected on a large, high-quality video screen. I do not know where he sat on the surface of the globe, let alone what he would see if he walked off camera to his right or left. Behind him was a glossy world map, coincidentally showing my real location immediately over his right shoulder, although Mexico itself was obscured. My face appeared in a fuzzy frame below his right hand. He and the several other participants spoke mostly in Spanish, a language which I unfortunately have never studied; but I was able to keep up (to a degree) by pasting their PowerPoint slides into Google Translate on a laptop.

Google’s translation revealed remarkably similar themes to the morning’s discussion at Tufts. It felt like one conversation, as if you could walk through the screen and find yourself sipping coffee with colleagues in Mexico who would know your friends from Tufts. The video monitor created the illusion of an open portal. Yet thousands of miles, an armed political border, and a language gap separated us. I felt stiffer, more formal, less humorous, and less responsive in the last situation than the first two. It’s one world now, but propinquity still matters.