My father, Joseph M. Levine, died last year on this date. This is my obituary or appreciation of him. On the advice of a reader, I also put a photo of him on this blog for one year. I’ve taken it down, although I’m leaving a prominent link to his obituary.

I suppose that if you live for 75 years and then people miss you sincerely for the rest of their lives, you have lived well. The traditional words for this day certainly seem apt: “May there be abundant peace from heaven, and life, for us.”

President Obama signed this order on his first full day in office. It looks promising. I am particularly pleased that the Administration sees transparency, participation, and collaboration as related. There is a broad and strong movement for transparency, which I support. Many good-government and civil-liberties groups understand the importance of freedom of information, and there is even an important Act by that name. But knowledge (by itself) is not power. Power, or the capacity to act, requires relationships, motivations, opportunities, training, and models–not just facts. The executive order suggests that the Obama Administration understands this:

My Administration is committed to creating an unprecedented level of openness in Government. We will work together to ensure the public trust and establish a system of transparency, public participation, and collaboration. Openness will strengthen our democracy and promote efficiency and effectiveness in Government.

Government should be transparent. Transparency promotes accountability and provides information for citizens about what their Government is doing. Information maintained by the Federal Government is a national asset. My Administration will take appropriate action, consistent with law and policy, to disclose information rapidly in forms that the public can readily find and use. Executive departments and agencies should harness new technologies to put information about their operations and decisions online and readily available to the public. Executive departments and agencies should also solicit public feedback to identify information of greatest use to the public.

Government should be participatory. Public engagement enhances the Government’s effectiveness and improves the quality of its decisions. Knowledge is widely dispersed in society, and public officials benefit from having access to that dispersed knowledge. Executive departments and agencies should offer Americans increased opportunities to participate in policymaking and to provide their Government with the benefits of their collective expertise and information. Executive departments and agencies should also solicit public input on how we can increase and improve opportunities for public participation in Government.

Government should be collaborative. Collaboration actively engages Americans in the work of their Government. Executive departments and agencies should use innovative tools, methods, and systems to cooperate among themselves, across all levels of Government, and with nonprofit organizations, businesses, and individuals in the private sector. Executive departments and agencies should solicit public feedback to assess and improve their level of collaboration and to identify new opportunities for cooperation.

My prediction is that transparency will improve in the Obama Administration–certainly above the poor baseline set over the last eight years. I am sure there will be at least some experiments with participation and collaboration. The question is whether these habits will become pervasive. The executive order is a great start, but implementation will be hard.

This, by the way, is an opening for all of us in the civic engagement field: “Executive departments and agencies should also solicit public input on how we can increase and improve opportunities for public participation in Government.”

Monday morning: the Delta shuttle to DC is disappointing. It’s only two-thirds full, and some of the passengers (to judge from their cell-phone conversations) are not going to the Inauguration.

I meet the rest of my family at National Airport, coming in from Atlanta. Their flight is more like what I’d been hoping for. I watch the passengers disembark; they are predominantly older African Americans, dressed up, and beaming. The Metro is also a scene of jubilation. I figure I have spent close to 7,000 hours on the Metro so far in my life. I have often seen it as crowded as this, but I have never seen it so jammed with rookies. No one knows where we are or what to do next. But the atmosphere is supportive, friendly, and patient.

There are almost two million extra people in town, yet right away we see Imani from my daughter’s former 3rd-grade class, and her Mom. This sets a pattern: during the rest of our visit, we meet about a dozen old friends and neighbors in the midst of the vast crowds.

Monday afternoon: At our neighborhood’s CVS drugstore, the manager is out in front of the cash registers, organizing customers into lines, offering to assist each one, and generally acting like a gracious host. He is an African American man of about 65. Of course, I don’t know his biography, but he reminds me of many lifelong DC residents I have met. I sense that this is his city, that this day is of enormous importance to him, and that he wants every last visitor to feel welcome. The City of Northern Hospitality and Southern Efficiency is turning into its very opposite.

Across the street from the house where we are staying, a small clutch of protesters holds signs identifying Barack Obama with the Beast of the Apocalypse. I consider reminding them to be nonviolent, and wish they were elsewhere.

At a party for one of the Campaign’s policy committees, the actor Forest Whittaker speaks, followed by the man nominated to be Secretary of Housing and Urban Development, Shaun Donovan. Donovan says that he was initially humbled and even overwhelmed by his appointment, but then he started to get a flood of emails offering help and helpful advice. He decided that he couldn’t do the job, but we could. This is very much in the spirit of the day.

END_OF_DOCUMENT_TOKEN_TO_BE_REPLACED

For I will consider my dog Barkley.
For he has no inkling of things metaphysical.
For he never meets a creature who is not his friend.
For if he worships, it is done his way.
For first he sniffs incessantly in circles.
For secondly he tugs the leash.
For thirdly he tastes whatever he finds.
For fourthly he chews and recalls.
For fifthly he sits on a lap and sleeps.
For he is an enthusiast.
For he knows not jealousy nor suspicion.
For embarrassment troubles him not.
For when anyone lies on the ground, he rushes to resuscitate.
For, tho he is brave, shadows and mean dogs frighten him.
For sad sounds disturb him.
For he can flatten himself like a gerbil to pass under gates.
For, tho he cannot fly, he is an excellent gamboler.
For he can detect tiny scraps of food.
For he is much more waggery than gravity. 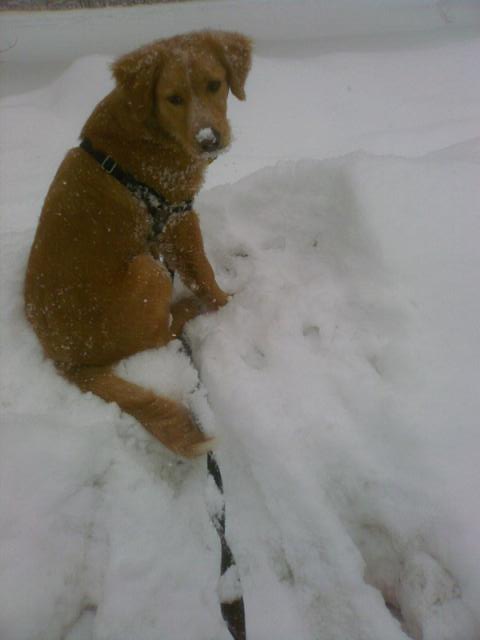 We are in Washington, DC, for the Inauguration–attending some parties and trying to catch a glimpse of the actual event. This blog is carefully nonpartisan, because I believe there is an important nonpartisan agenda for civic renewal, which is the goal of my work and my writing. I think I was reasonably fair and even-handed here during the campaign. I tried to analyze the Clinton/Obama debate in a neutral way and I wrote very positively about John McCain. I have derived ideas and principles from modern conservatism.

But I was also a passionate supporter of Barack Obama, starting in 2004. I was honored to serve on his campaign’s Education Policy Committee and Urban & Metropolitan Policy Committee for many months. I have high hopes for his presidency.

I voted for him because he comes straight out of the movement for what he calls “active citizenship,” and he is going to try to bring that movement back into national politics. His background includes community organizing in Chicago (the birthplace of community organizing), seminars on civil society with Robert Putnam, and civic education as a law professor. He has judged youth media contests and organized service events. His wife has worked for an AmeriCorps program and organized community partnerships for a major university. These are basic ingredients of the movement that I think represents the best of America today. (You can follow recent news from such programs here.)

For those of us in that movement (and it is open to all), our job must now shift. We must be custodians of the ideas that inspired Obama. He will need to compromise and deal with other issues and problems, and he will probably lose perspective. We need to keep thinking and talking clear-sightedly about active citizenship. If leadership is deciding which pressure to cave to, we can help by applying some pressure from the civic side. As the new President said all along, this election is not about him; it’s about us. I like the idea of a “citizens’ oath of office.” Nothing would conclude the remarkable Obama Campaign better than a mutual pledge to take our own, independent, public role seriously for the next four years.