On one of my recent visits to a college campus, I met a bunch of students who began by telling me all the excellent ways they are involved in civic and political affairs. One young woman mentioned some hospital volunteering and research overseas. A couple of others said (among other things) that they worked for Democratic candidates. The conversation then turned political and very anti-Republican, with students saying that it was important to vote because the GOP had practically ruined the country over the last eight years.

I noticed some quiet people at the table. I intervened and asked them to speak freely. It turned out that the hospital volunteer was also the president of the Young Republicans on campus. Apparently, she hadn’t wanted to mention that role when we introduced ourselves.

Once, at the University of Maryland, a senior who was working on a scholarship essay “came out to me” as a conservative. A conservative thesis seemed to fit his essay best, as I observed; but he thought he’d better not own up to such ideas. He said I was the first professor to whom he had admitted his conservative leanings.

I’m as progressive as the next person, but I think we are losing valuable educational opportunities this way. I used to find that many of Maryland’s best students, who came to me for help with their applications for Rhodes and Marshall scholarships, had never encountered conservative ideas. This made them rather naive debaters. A liberal today who cares about homelessness–for example–ought to be very familiar with the thesis that the government worsens homelessness through rent control (which reduces the supply of housing), or that homeless people need spiritual help from “faith-based” organizations. Maybe these ideas are wrong, but they should not be new to college graduates who care about homelessness.

The following is a message from the November Fifth Coalition …

WE ARE ALL THE CHANGE WE NEED!

There has been a lot of talk this presidential election about “who makes change?” — John McCain or Barack Obama. We need to change this conversation. It’s sometimes easier to pretend we are spectators. But we all need to be involved if we are to see the changes we need.

The Second Presidential Debate on October 7th offers the opportunity to make this point and help change the focus from “them” making change to “all of us” making change. The debate has a “Town Hall Format” with opportunities for electronic questions, already open. We encourage citizens of all views and persuasions to query both candidates through email on some version of these questions, using an issue you are passionate about (e.g. the economy, health, global warming, education, poverty):

To submit a question: go to www.MyDebates.org by October 2nd (the last date for submission).

Background: This call for us all to claim the role of change agents comes from the cross-partisan November Fifth Coalition (www.novemberfifth.org), which formed last year to put active citizenship in the presidential election. We declared that the election is about all of us, not simply candidates.

For more information on the debate format and to spread the word go to http://tinyurl.com/3kzaca. To find out more about November Fifth Coalition, go to this FaceBook page.

Click http://www.belmontdebate08.com/faq for Frequently Asked Questions about the debate.

To submit a question: go to www.MyDebates.org

Here is Justice O’Connor, co-chair of the national advisory council of the Campaign for the Civic Mission of Schools. She is standing with the Campaign’s Steering Committee, only some of whom fit within the column width of my blog, on the terrace of the Newseum in Washington, DC. The Steering Committee represents almost all of the specialized organizations that offer various forms of civic education or service-learning, plus many important stakeholders such as the teachers’ unions and the National Association of School Boards. I think that’s me in the back, although it could be some other civic ed guy with short hair. 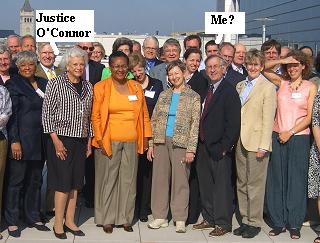 Anyway, after this picture was taken we repaired to a conference room and spent a profitable day (last Monday) discussing next steps in the struggle for civic education.

[Note: a revised and improved version of this post was published in Philosophy & Public Policy Quarterly: PDF]

The Kennedy-Hatch “Serve America Act of 2008” (S.3487) would dramatically expand federal support for civilian service programs. Both major presidential candidates took time out on Sept. 11 to endorse the bill in New York City. As Senators, they are also co-sponsors. Given their support and the leadership of Senators Hatch (R) and Kennedy (D), I’d say the bill has pretty good odds. Here is a “bill tracker” that will automatically show its latest progress:

The objective of the bill is to get 250,000 Americans (of all ages) involved in federally supported “service” every year. “Service” could mean a lot of things. It could mean paramilitary work, with people in uniforms patrolling our borders or building defense installations. It could mean individual acts of charity, such as helping elderly people to cross the street. It could mean controversial and aggressive political activism.

In practice, the term “service” in federal-policy talk really means a heterogeneous but finite list of programs. Some, like the Peace Corps, are directly run by the government. These programs can provide full-time jobs with serious responsibilities and high standards. In 2002, for example, there were 215,000 requests for applications for the Peace Corps, yet the Corps had just 7,500 open slots and picked extremely well qualified experts (many of them with years of experience). In contrast, Youth Build is a private, nonprofit corporation that is partly funded by the US government. It enrolls poor people between the ages of 16 and 24, most of whom have been homeless, in foster care, or in prison or probation. Only 11 percent have high school diplomas. Participants learn building skills and receive a dose of civic education. To name a third example, Learn & Serve America is a federal program that funds schools and colleges and state education agencies to help them provide “service-learning”–academic teaching enriched by service experiences. No one is enrolled in Learn & Serve America, but many thousands of students are somewhat affected by it.

For a philosopher who wants to discuss whether “service” is a good thing, the heterogeneity of these programs poses a challenge. It’s impossible to define them by naming necessary and sufficient conditions. They do not even share the same objectives. The Peace Corps seeks to promote development overseas in the interests of US foreign policy. YouthBuild tries to enhance the job prospects of its participants. Learn & Serve America is focused on academic skills.

Nevertheless, “service” constitutes a real community of practice, with many overlapping networks of alumni and leaders, similar funding sources, frequent meetings and conferences, a common genealogy dating back to the Roosevelt Administration, and a shared political agenda–currently focused on the passage of Kennedy-Hatch. This should not be surprising. Regardless of their original, official purposes, institutions and professional communities typically evolve and develop into heterogeneous collections of programs. We ought to be able to say whether supporting such “fields of practice” is good public policy. (Of course, we can also propose to shift such fields by preferring some of their elements over others.)

On balance, I think the field of “service” merits more federal support today. Despite the diversity of programs that would be supported, “service” generally advances several important goals.

END_OF_DOCUMENT_TOKEN_TO_BE_REPLACED

(en route from Washington to Bates College in Maine, via Boston). I’m on a sort of a road trip with not much time in front of computers for blogging. Instead I would like briefly to advertise The Democracy Imperative, whose website is now full of useful and current material. TDI fills an important niche: deliberative democracy in colleges and universities. It’s not only a gathering of college professors and administrators who use deliberation in their own classrooms and dorms, but also a place to think about deliberation in the governance of colleges and about true dialog between colleges and their communities. Membership is free; here’s where you join.