I believe that communities educate children, not just schools; and it is a false hope that we can achieve dramatically better results by tinkering with the structure of schools: their governance, funding, incentives, and regulations. Most experiments that focus narrowly on schools, from Reading First to privatization in Philadelphia, seem to fail. PEN, the Public Education Network, is a great leader in promoting this idea:

While there is a broad public understanding about the important role that schools play—teaching, learning, curriculum development, assessment, discipline, student development—few individuals in communities understand their civic role, whether they be parents, or adults without children in school, in contributing to quality public education for all students.

Communities provide the social, financial, and political capital that is crucial to school and student success. Citizens vote for elected leaders, pay taxes that fund schools, and also participate in powerful social networks that shape how schools and communities address the educational and developmental needs of young people. There is an inextricable link between high achieving schools and the community actions that support these schools. Without public action, there can be no quality public schools.

With a small assist from CIRCLE, PEN recently unveiled its “Civic Index for Quality Public Education,” which is a survey that any community can conduct, compare its local results to national data, and develop strategies for improving civic engagement.

Robert Darnton, the great Princeton historian, is no Luddite. He welcomes Google’s Book Search, which provides direct access to scanned versions of books from the New York Public Library, Harvard, Michigan, Stanford, and the Bodleian. However, he lists several reasons not to give up on traditional, bricks-and-mortar libraries or to assume that a digital archive can replace them. I will add another reason, which applies (an any rate) to the current version of Google Book Search. Google uses black-and-white photography to reproduce books that were originally printed in black ink. But all real books have color–especially the old ones, whose paper yellows unevenly. In Google’s photographs, all the books published before 1900 look bleached and considerably less attractive than they really are.

Pockmarked with nails, the walls echo. Dust clots mark the outlines of cozy furniture. The cat slinks in search of cover. In a long hall where once a toddler learned to run, flinging herself again and again on parents’ knees, stacks of cardboard cubes are marked with one word each: “pots,” “toys,” “coats.” The boxes carry away traces of Thanksgiving meals, birthday parties, imaginary villages, winter walks. A key in the lock, a backward look. Onward.

I guess this is a well-known story, but I wanted to document it. Here is the median age that American women have their first child (in dark blue) and the percentage of younger women (age 25-34) who have completed four years of college (in red). From 1945-1965, women bore their first babies at an increasingly early age, and women’s educational attainment did not rise much. This was the era of the Feminine Mystique and “Leave it to Beaver.” Then we see a very substantial rise in educational attainment, and childbearing is delayed. Today, it is common for a woman in her late 20s to have a college degree and children in her future, but none born yet. That combination was really quite rare in 1960. 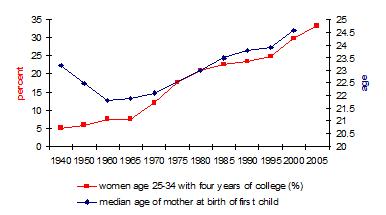 I just read the Bradley Foundation report on America’s National Identity, entitled E Pluribus Unum. It argues that “America is facing an identity crisis,” because we do not know enough information about our founders; students are not “taught about America’s great heroes, dramatic achievements and high ideals”; and “there’s too much attention paid these days to what separates different ethnic and racial groups and not enough to what they have in common.” (The last claim was tested in a Harris poll and drew the support of 80 percent of respondents, including majorities of Latinos and African Americans). The report bemoans a “tendency to separatism” — reflected in ethnic-themed residency halls — and a turn to global citizenship in place of the “distinctive features of American citizenship.”

I think there is a legitimate debate about the balance of unity and diversity in American culture. James Madison pointed out that “faction” (the development of separate interest groups) was an inevitable result of freedom and vitality. On the other hand, he also believed in the common good, “the permanent and aggregate interests of the community.” Americans should be free and even eager to associate in groups with particular interests and values; but they should also have concern for the whole. If we lose the latter, we are in some danger.

To this extent, I can endorse the Bradley Report. But I am struck by its very weak and sloppy empirical basis.

The report says, “In the past, schools required an extended study of government. Today, high schools require one government course, compared with three before the 1960s.” The footnote cites me as one of the authors of the document on which this claim is based. Actually, we used an article by Richard Niemi and Julia Smith, which should have been consulted directly. In any case, the facts are quite otherwise. Schools used to offer as many as three courses on civics, one of which emphasized controversial contemporary issues and another, the role of active citizens in their communities. The one course that is left–and almost universally required–is the one that the Bradley report recommends, a course on American government. The shift has been away from controversy and toward unity.

As I’ve noted here before, we surveyed young Americans about the themes they remember studying most in American government and history courses (pdf). The three main themes were the Constitution and the American political system, “great American heroes and the virtues of the American system of government,” and wars and battles. Only 9 percent of young people recall any emphasis on “racism and other forms of injustice” in their social studies classes.

The Bradley Report asserts that today’s attitudes “represent a sea change,” but no historical data are offered as evidence.

It notes that Americans are racially segregated, but it blames colleges and universities for creating themed dorms. A tiny percentage of Americans are affected by these arrangements on our campuses. There is no mention of the dramatic resegregation of American k-12 schools.

The report uses a survey question to substantiate the claim that Americans are upset about ethnic separatism and multiculturalism, but there is no mention that alternative ideas were tested in the poll. For instance, I wouldn’t be surprised if majorities would assent to the proposition that economic inequality has driven a wedge among Americans and undermined national unity.

The report cites troubling statistics about Americans’ knowledge of the Constitution and American history. Ninety-nine percent of college seniors could identify Beavis and Butthead but fewer than one quarter could identify a major phrase from the Gettysburg Address. I think that’s bad, but I would note that Americans’ political knowledge has been remarkably stable for the 100 years. There is no evidence of decline, according to the most comprehensive study (Delli Carpini and Keeter 1997). Further, we do teach the Gettysburg Address and other founding documents. It is regrettable that Americans do not remember what they have studied, but that is true of biology and math as well as American history. It does not imply that schools have abandoned their traditional job of teaching any particular content area. In civics, NAEP scores are flat, which belies the claim of decline. But I can also say–as a member of the current NAEP Civics Committee–that decisions about how to define “proficient” and “advanced” performance on that test are casual and highly arbitrary. Thus I am never shocked to learn that most students don’t score at a “proficient” level.

Finally, the Bradley report notes that new immigrants score lower on the NAEP civics test than native-born American students and that immigrants are less likely to consider themselves “Americans” after they have been enrolled in American schools for four years. The NAEP results should be controlled for family income; I hypothesize that immigrant youth will score at least as high as native-born youth of the same socio-economic status. And the factoid about students’ attitudes should be put in context. There is a large body of evidence showing that young immigrants assimilate rapidly. I suspect that they temporarily feel “less American” after four years in school only because they realize how far they have to go to enter the economic and cultural mainstream, which is where many of them want to go.

It would be good to have a report on American citizenship that defended the conservative values of unity, tradition, and nationalism but that reflected careful scholarship and a weighing of evidence on all sides of the issue. Unfortunately, the Bradley Report isn’t that. It’s a good anthology of quotations from the founders but a weak exercise in social science.