I’ve been in Chicago for an interesting research conference on civic participation. There was some discussion about how empirical research should relate to “normative” thinking, i.e., arguments about how citizens ought to act, or how institutions should treat citizens. One of my colleagues* suggested that it might be helpful to provide empirical researchers with a menu of reasonable normative ideals, each of which might support different policies and outcome measures.

I’d first note that many people care about politics because they have substantive goals: for instance, social justice, individual liberty, moral reform, or concern for nature. Thus we could begin by listing substantive political ideals. But that would produce a huge array, especially once we cross-referenced each substantive goal with various ideas about appropriate political behavior. (For instance, you can be an environmentalist who believes in public deliberation, an environmentalist revolutionary, or an environmentalist who thinks that consumers and conservationists should bargain with business interests.) Thus I’d begin by conceding that there will be debates about what makes a good (or better) society. Assuming that the people engaged in these debates want to handle their differences democratically, we can turn to various rival views of democracy:

a. Equal influence in an adversarial system: The main purpose of politics is to bend institutions to one’s own purposes, nonviolently. As in the title of Harold Lasswell’s 1958 book, politics is “Who Gets What, When, How.” It is desirable that poor and marginalized people participate in politics effectively, because this is their way to counter massive inequality in the economy. Voting is a core measure of participation; votes should be numerous, and the poor should be at least as prone to vote as the rich. Other forms of political engagement are also aimed at the state or at major private institutions, e.g., persuading others to vote, protesting, and filing lawsuits. The value of a political act depends on its impact, which is empirically measurable. For example, a protest may affect the government more or less than a vote, depending on the circumstances.

b. Deliberation: The main purpose of politics is to exchange ideas and reasons so that opinions can become more fair and informed before people take action. A vote is not a good act unless it is well informed and reflects ethical judgment and learning. Participation in meetings is good, especially if the meetings include ideologically diverse people, operate according to fair rules and norms, and conclude with agreement. The use of high-quality news and opinion sources is another indicator of deliberation.

c. Public work: Citizens create public goods by working together–especially in civil society, but also in markets and within the government if these venues are reasonably fair. Public goods include cultural products, the creation of which is an essential democratic act. Relevant individual-level indicators include “working with others to address a community problem” (a standard survey question) or–specifically–participation in environmental restoration, educational projects, public art, etc. Perhaps the best indicators are not measures of individual behavior but rather assessments of “the commonwealth,” which is the sum of public goods.

d. Civic republicanism: Political participation is an intrinsically dignified, rewarding, and honorable activity, particularly superior to consumerism. It is implausible that voting once a year could be dignified and rewarding; but deliberation or public work could be.

Civic participation is not only a means to change society; it is also part of the citizen’s life. Thus we also need to consider:

2. Theories of the good life

a. Critical autonomy: The individual should be as free as possible from inherited biases and presumptions. We should hold our opinions and roles by choice and revise them according to evidence and alternative views. Not only should people choose their substantive political values, but they should decide, after due reflection, whether or not to engage politically.

b. Eudaimonism: A good life is a happy life, if happiness is properly understood. (And that’s a matter of debate.) The happiness of all human beings should matter to each of us, which implies strong and universalistic moral obligations.

c. Communitarianism: We are born into communities that profoundly shape us. Although we should have some rights of voice within our communities and exit in cases of oppression, true autonomy is a chimera and membership is a necessary source of meaning. Participation in a community is essential, but what constitutes appropriate participation is at least somewhat relative to local norms.

d. Creativity: The good life involves some measure of innovation, expression, and the creation of things that have lasting value. Creative work can be collaborative, in which case it requires civic engagement.

These two lists could be combined to create an elaborate grid or taxonomy (which would become 3-D if we added substantive political goals). I’m struck that especially my second list looks rather idiosyncratic, even though my intention was merely to summarize prevailing, mainstream views. I’m not sure what that says about me or this subject.

*I have a self-imposed policy against identifying other people who attend meetings with me.

(Chicago) Yesterday, we received a copy of my new book, The Future of Democracy. I don’t know whether it’s seemly to post advertising copy for one’s book on one’s own blog, especially if one wrote the copy oneself. I once posted a CIRCLE press release here. I had mostly written the text myself, and it quoted me as “Peter Levine.” Someone remarked, “Attributing a quote to yourself on your own blog is bad form.” But I was in a big hurry that day (the morning after an election). This time I have no excuse, yet I am pasting my own third-person summary of my own book below.

END_OF_DOCUMENT_TOKEN_TO_BE_REPLACED

(Chicago) Surveys consistently find that most American students discuss current events in their classrooms and feel free to express their own views in these discussions. For instance, according to CIRCLE’s 2006 survey, three-quarters of current students ages 15 to 25 reported that they had the opportunity to discuss current political and social issues in their high school courses. The vast majority (80%) reported that they were encouraged to form their own opinions regarding these issues.

Yet, as Diana Hess notes, classroom observations consistently find that the vast majority of time in social studies classes is devoted to lectures; real deliberations of current issues are exceedingly rare.

How to square those two results? Hess suspects that students’ reports of “open classroom climate” are misleading. I’d put it this way (speculating a bit): Most kids recall that at one time or another, their peers and a teacher discussed a controversial issue. Most students also think that their teachers are basically nice people. Therefore, if you (a high school student) say to Mr. Jones, “What did you think about Bush’s speech last night?” or, “I’m really mad about the abortion decision,” Mr. Jones will not bite your head off. He may even encourage your interest by saying something supportive–regardless of the position you take. He’s probably interested in current events himself, if he teaches social studies. But he will soon call class to order and get back to the required material. If you are surveyed about the “classroom climate,” you will say it was “open,” even though there was no real discussion.

Hess’s most intriguing suggestion: Perhaps the modest positive correlations that we observe between open classroom climates and civic engagement are the combination of no effects from average classrooms and transformative effects from real deliberations. Her research-in-progress will test this hypothesis.

State primaries are the only contests that really count for selecting a presidential nominee. The national population never weighs in, which notoriously means that people count for a lot more in New Hampshire than in, say, Maryland. Nevertheless, the candidates are surely interested in their standing among all Americans who register with their party. That’s partly because their level of national support will influence state primary voters. And it’s partly because the primary calendar is so compressed and unpredictable this year that it’s risky to rely on particular states.

Here, then, is a graph showing support for Senators Clinton, Obama, and Edwards among likely Democratic voters nationwide. (Source for the data.) 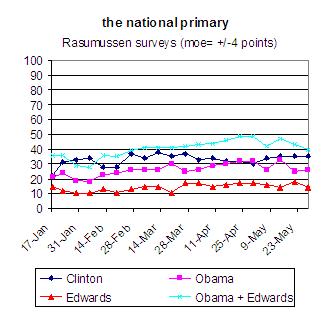 The three leading candidates have gained since January, at the expense of “don’t know/undecided.” Senator Clinton quickly rose to the mid-30-percent range and has then had very stable support. Support for Senators Edwards and Obama has been more volatile and has sometimes traded-off. For example, during the third week of March, Obama gained at Edwards’ expense, but then that trend reversed. It’s as if 35% of the Democratic electorate has settled on Senator Clinton, and the rest prefers an alternative–but hasn’t decided who that should be.

(Medford, Mass.) With help from the Democratic Governance Panel of the National League of Cities, the November Fifth Coalition has written up six excellent examples of communities in which broad public deliberation has addressed serious, difficult issues, from crime to sprawl to a major budget deficit. These examples need to be part of the public debate, so that candidates, reporters, and ordinary people understand the potential of citizen’s work.