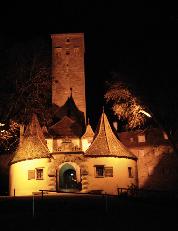 We had a wonderful pre-Christmas trip to the little Bavarian city of Rothenburg ob der Tauber. It is an old Free Imperial City of the Holy Roman Empire, a municipal republic like those of medieval Italy, very well preserved within its walls from the days of the meistersingers. In the weeks before Christmas, all decorated for the season, it is almost unbelievably quaint. We also drove up and down the “Romantic Road” (die Romantische Straße), which connects villages, castles, and walled cities, mostly in western Bavaria. I’ve made a movie to illustrate our visit. I don’t really anticipate regular readers of this blog watching it (it’s five minutes long), but I have posted it for people who are Googling “Rothenburg” to decide whether to visit.

We are leaving today for a family vacation in Germany. I won’t post again until shortly after Christmas.

We’re going to Rothenburg ob der Tauber, a little medieval town in northern Bavaria. It’s one of many German towns that have Christmas Markets. The streets are filled with stalls, decorations, lights, music, and outdoor food and drink for several weeks in December–or so we’re told.

We visited another Christmas Market accidentally in 2004. I was invited to a conference in the Netherlands, and while I was there, my family stayed in Bruges/Brugge (Belgium). The whole town was decorated for Christmas. There were jovial crowds of European tourists, and the streets were lined with shopping stalls. Our kids got a heavy dose of yuletide cheer and we all saw some art. It worked so well that we decided to try another Christmas Market this year. It turns out that there are scores, or perhaps hundreds, of them across Catholic Europe. So we are trying Rothenburg and will report back in the New Year. Meanwhile, happy holidays.

There is a remarkable gap between Senator Obama’s actual speech in New Hampshire last weekend (click for video) and the endless coverage and commentary that I have read about it. Reporters and bloggers uniformly take the line that Obama presented himself as someone “new”–as a “change”–and New Hampshire Democratic voters liked him for that reason. Supposedly, they saw him as “new” because of his recent arrival in Washington, his relatively young age, his career in grassroots organizing, and even his race and immigrant background, which make him different from all the other contenders–and worlds apart from the incumbent president.

Novelty would be a superficial reason to “swoon” for Obama; that feeling would soon wear off. But reporters really didn’t pay attention to his speech, which is why they don’t grasp the source of his popularity.

Now, listen, I have to confess that there has been a little bit of fuss about me lately. And I have been a little suspicious of it, because I actually come from a background of community organizing and grassroots organizing and mobilization and empowerment, and so–a lot of reporters of late have been asking me, ‘Well, why are you coming to New Hampshire? What does this mean? You’ve got big crowds. Does this definitely mean you’re jumping in? And this and that and the other.’

What I told them during a press event earlier here today, and what I want to say to you–Obviously it’s flattering to get so much attention, although I must say it’s baffling, particularly to my wife. I actually think that the reason I’m getting so much attention right now has less to do with me and more to do with you. I think to some degree I’ve become a shorthand or a symbol or a stand-in, for now, of a spirit that the last election in New Hampshire represented. And it’s a spirit that says we are looking for something new. [applause] …

There’s a wonderful saying by Justice Louis Brandeis once, that the most important office in a democracy is the office of citizen. And that, I think, more than anything is what the election here in New Hampshire represented on Nov. 7. And that is the tradition of New Hampshire, not just in presidential primaries but each and every day: the idea that all of us have a stake in this government, all of us have responsibilities, all of us have to step up to the plate, and as a consequence of everybody … doing just that, we had an outstanding election here in New Hampshire. So I’m here to get some tips from you. [Applause] I’m here to soak up some of that energy. [Growing applause.] I’m here to bask in the glow of the great work that you have done. And I want you guys to remember that. You’re the story, not me. Now that’s hard to understand, because that’s not the politics we have seen just lately.

The Senator then talks about his work trying to “rebuild and renew America”–especially low-income America–through grassroots organizing. He connects his own work to American history, which he sees as a series of popular uprisings led by “pastors, organizers, agitators, and troublemakers” who have had the audacity to hope.

In each and every juncture of our history, there has someone who has been willing to say that we can do better. … We can create a country where everybody’s got a shot, where every child can dream. … And I think what’s been happening over these last several months is people have realized that that kind of spirit has been lost over the last decade. [Applause.] It’s not that ordinary people have forgotten how to dream big dreams; they just think that their leadership has forgotten. [Applause] … And so what happened in this election, not just here in New Hampshire but all across the country, is that voters decided to start paying attention. They looked up and they said, ‘We’re in a serious mood, we’re in a sober mood, and we want to know, how can we rekindle that spirit?’

Pundits have ignored everything in the speech after “we are looking for something new.” (You literally can’t find the rest of the speech with a Google search.) Reporters assume that Obama’s words about citizenship were just throat-clearing, or crowd-pleasing rhetoric, or false modesty. Thus they can’t grasp why people love him.

The public is hungry for more opportunities to participate in solving our grievous problems. It is not only the depth of our challenges that upsets us, but also the sense that we have been shut out of civic life and cannot be part of the solution. A candidate who can genuinely empower citizens will ignite powerful enthusiasm–not among all Americans, but among the politically active who dominate primary elections.

Obama has most of the ingredients he needs to run a persuasive “empowerment” campaign–much more so than Al Gore, John Kerry, or Hillary Clinton. As a community organizer, he has the right resume. (His “home town” of Chicago has been the epicenter of grassroots civic work since the time of Jane Addams.) He speaks eloquently and insightfully about civic participation. What he will need is a list of serious policy proposals for civic renewal. By connecting his rhetoric of empowerment to concrete reforms, he may be able to persuade reporters and other elites to take that rhetoric seriously. They will realize that he really means what he says. And then the fire that he has kindled may begin to burn.

… and that’s my obligation, to make sure that I’m willing to partner with the American people on the common-sense, pragamatic, not ideological agenda that they’re hungry for to meet the challenges that we face [Applause.]

This is a very sketchy model, based on nothing more than personal observations and reflections. The arrows are supposed to be causal, although I can’t estimate the strength of these relationships. Thus, for example, the human instinct to distinguish in-groups from out-groups, plus skin color differences, yields economic disadvantage for African Americans.

The overall idea is that certain background factors predispose people (including some African Americans) to anti-Black prejudice. Actual prejudice is triggered by particular factors, such as skin color and accent. The results are harmful behaviors, some of which reinforce the background factors in a feedback loop or vicious circle.

Some things that are missing from this model: capital-accumulation, political participation and relations to government, minority status (in the sense of being outvoted by the more numerous group), and religion.

The Millennials are not numerous enough in the adult population to show a trend. Anna Greenberg found that 63% of Millennials supported a woman’s legal right to abortion, but her question didn’t specify the conditions under which abortions would be allowed. Surveys of college students typically find strong support for abortion rights, but most young people do not attend college.