It’s pretty obvious that the Bush Administration will try to counter public dissatisfaction with the Iraq war by calling critics “appeasers,” “quitters,” and the like. It is also obvious that the national Democrats, having gone through the Swift Boat Experience, are now ready to counter-punch speedily. But will they respond cleverly?

After Secretary Rumsfeld’s VFW speech, the House Democratic leader, Nancy Pelosi, was ready with a zippy quote. She said, “Secretary Rumsfeld’s efforts to smear critics of the Bush administration’s Iraq policy are a pathetic attempt to shift the public’s attention from his repeated failure to manage the conduct of the war competently.”

This reminds me a little of the press releases Mary Matalin used to issue on behalf of George H.W. Bush in 1992. She would call the Democrats “sniveling,” “pathetic,” “cowardly.” Her rhetorical style, in other words, was to rely exclusively on pejorative adjectives. You can imagine people looking over a first draft in Pelosi’s office and saying, “Let’s add ‘reprehensible’ there.” “No, ‘abhorrent’ sounds tougher.” “Too fancy. How about ‘pathetic’?”

Matalin’s candidate, as you will recall, lost. If you’re going to counter-punch, you have to say something that makes people stop and think. It has to have some content. For example: “No Democrat wants to ‘appease’ Osama bin Laden. We want to destroy him. By the way, why is bin Laden still at large, Secretary Rumsfeld?” Or: “Instead of going to Nashville to reminisce about World War II, Secretary Rumsfeld should be back in his office trying to figure out how to end the war he started.”

This is not a kind of politics that inspires me. But it’s going to happen, and it might as well be effective.

Maybe it’s because I still have a summer ‘flu and a fever, but I find this very funny: 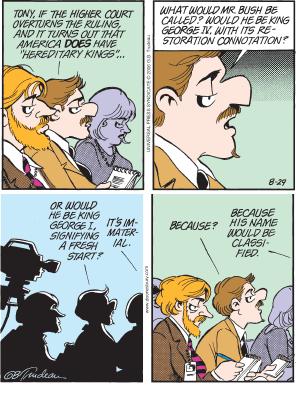 Dana Fisher’s book, Activism, Inc.: How the Outsourcing of Grassroots Campaigns Is Strangling Progressive Politics in America, is about to appear with a blurb from me on the back cover:

For idealistic young progressives today, there is basically only one paid entry-level job left in politics: canvassing. Dana R. Fisher is the first to study this crucial formative experience. Essentially, she finds that the canvass is an alienating and undemocratic experience. As a result, we are squandering the energy and ideas of a whole generation. What’s more, a progressive movement that relies on regimented canvassing is doomed to defeat because it lacks an authentic connection with citizens. Unless we take seriously the rigorous evidence and acute arguments of Activism, Inc., the future looks grim.

My conscience is bothering me for two reasons. First, my summary of Fisher’s book is a pretty strong statement, perhaps exaggerating what she says. Second, she does tell a highly critical story (as her subtitle indicates). My blurb lends my authority to her criticism, suggesting that her “rigorous” and “acute” scholarship must be true. In fact, given what little I know directly about canvassing, plus the evidence that Fisher presents in her book, I cannot say whether her account is accurate or not.

1) Canvassing is bad for canvassers: many are burnt out, stuck in dead-end positions, or alienated because they have to raise money by reciting ?scripts? that they do not fully understand.

2) Canvassing for progressive causes is being centralized into a few big, multi-purpose operations. This consolidation reduces the connection between the canvassers and the various lobbies for which they raise money.

3) Canvassing is bad for democracy, because professional activists set the progressive political agenda and lobby using money from people whom they have mobilized through one-way conversations. Democracy needs organizations in which citizens frame their own agendas through conversations, develop working relationships with peers and neighbors, and then hold professional lobbyists and leaders accountable. (This third point is mentioned but not developed in the book; it’s partly my own extrapolation.)

The first point–that canvassing is bad for canvassers–is based on Fisher?s 115 interviews. She provides many quotes, which actually tell a mixed story. Some of the interviewees have positive things to say; some are critical of the canvass. She does not code the interviews so that she can provide statistical summaries (such as “55% were negative”), but she does use words like “most.”

I don’t think the lack of statistics matters. Selecting and coding interviews is a fairly subjective process, so any hard numbers would look more precise than they would actually be. In essence, we must rely on Fisher to generalize fairly and accurately from her own observations. The fact that she quotes people who have a positive view of canvassing could be taken as evidence that she is scrupulous and balanced. Or the fact that she draws very negative conclusions, despite having talked to people whose views were positive, could be taken as a sign that she exaggerates.

Overall, she could be right. Others have made similar claims.* However, she could also be wrong, and I know former canvassers who loved their jobs. I am uncomfortable about having endorsed her portrayal with a confidence that cannot be sustained from reading the book alone.

Incidentally, this is qualitative research, which I strongly support. I have a doctorate in philosophy, which is about as qualitative as you can get. But it’s unusual for a qualitative study to focus on one real organization and to be highly negative. (Fisher uses a pseudonym, but the real identity of the canvass is not hard to discern.) If you criticize a sector or a profession, you must try to be accurate. But if you criticize an identifiable organization, the stakes are higher.

In this respect, Fisher’s book is more like a work of investigative journalism than typical qualitative social science. Aggressive journalism is extremely valuable–no less worthy than scholarly research; but it has different norms. We realize that the reliability of a reporter depends on his or her judgment, experience, and ideological bias: reporters lack a fancy “methodology” that they can use to defend their conclusions. Furthermore, journalists feel free to tell unusual stories and to seek out atypical cases “man bites dog.” In contrast, most qualitative research is an attempt to generalize on the basis of a representative sample. Much attention goes into methods for constructing representative samples of quotations taken from representative informants. These methods of selection are the basis of the researcher?s legitimacy.

By endorsing the “rigor” of Fisher’s book, I implied that her summaries were based on representative comments by representative canvassers. In fact, I don’t have any way of knowing whether that is the case.

Despite my blurb, I really cannot say much about the second major claim of the book: that consolidating the canvassing “business” into one or a few big operations has worsened the impact on canvassers. As a theoretical point, we would expect monopolies to be bad in this field, as in any other. However, there is not much evidence in the book about the degree to which canvassing has consolidated, nor about the the impact of outsourcing on the groups that have chosen to pay for canvassing.

Fisher’s third point is that canvassing is bad for democracy. Here she relies on a critique of modern American politics that comes from authors like Harry Boyte, Theda Skocpol, Carmen Sirianni, Lewis Friedland, Robert Putnam, Marshall Ganz, Mark R. Warren, Gregory Markus, and Kevin Mattson, among others. Allowing for major and interesting differences among these authors, they all decry “mailing-list” organizations that simply ask citizens to pay for professional advocacy work. They see these organizations as a new elite that lacks an authentic base.

Several also lament a tendency to mobilize citizens by demonizing opponents. They argue that this approach makes it more difficult actually to solve problems. Boyte, for example, has written: “The canvass embodies a view of politics as a zero-sum struggle over scarce resources pitting the forces of innocence against the forces of evil. In citizen action groups like ACORN or Clean Water Action or the PIRGs, narrowly scripted issue campaigns and a rigid ideological stance dominate. Public leadership development that teaches students to understand the narratives and interests of those with whom they disagree is slighted. The open, diverse political atmosphere of places in the Hull House tradition disappears.”

We know that Americans’ average rate of group membership has stayed constant since the 1970s, yet people’s tendency to work with others on community problems and their frequency of attending meetings (as measured in surveys) have dropped precipitously. It could be that centralized, national organizations displace forms of politics in which people set their own agendas and act cooperatively. Boyte, Sirianni, Skocpol, Warren, and Markus, in particular, argue that we need the kind of “relational organizing” exemplified by the Industrial Areas Foundation, Pico, and Gamaliel. Those groups depend on long-lasting, face-to-face relationships, horizontal communication among members, local cultural norms, and open-ended deliberation.

Relatively little in this literature is explicitly about canvassing–let alone about the specific canvass that Fisher studied. Thus the question is whether canvassing exemplifies the problem of professionalized, “mailing-list” organizations. Fisher sees canvassers as tools for delivering one-way messages to potential donors. However, if canvassers engage in two-way conversations on people’s doorsteps and pass the word back to their bosses, then canvassing is better for democracy than mass mailings are. Again, everything depends on the accuracy of Fisher’s first claim about the canvassing experience.

Fisher’s book raises questions that I am not qualified to settle about the performance of a particular group. That’s unpleasant because it pits her character against theirs. I’m inevitably implicated because I know and have professional connections to both sides. However, there are also more constructive and tractable issues to consider. For example:

I like to post here every work day, but a ‘flu that has been going around our family has hit me, and I’m too feverish to think straight. Having checked my email, I’m going back to bed.

Growing up in a politically competitive community turns out to have important educational advantages. Gimpel, Lay, and Schuknecht find that young people who live in communities with competitive elections are more knowledgeable about politics, more confident in their own capacity to make a difference, more trusting in government to be responsive, more tolerant, and more likely to discuss politics than their peers, holding many other factors constant.

Competition probably enhances civic learning because politicians and parties must reach out to citizens when elections are close. They reach out with messages that make people feel important and that convey interesting information. Also, regardless of how politicians behave, one can learn from growing up among roughly equal groups of Democrats and Republicans. In politically diverse communities, young people are exposed to divergent political views and understand that disagreement is inevitable. (The same advantage also arises from religious diversity.)

Political competitiveness can compensate for economic disadvantage. In fact, Gimpel and colleagues found that in poor communities with a mix of Democratic and Republican voters, young people grow up more knowledgeable than their peers who live in wealthy, single-party suburbs. Political competition boosts the level of discussion “by an amazing 17 percentage points among those with no plans to attend college,” because exposure to robust politics compensates for their relatively poor formal educations.

However, most Americans do not grow up in competitive districts. Only four incumbent Representatives were defeated in 2002, and only five in 2004. The same pattern occurs in many states. For example, in 2004, none of California’s 153 legislative seats changed parties. The 2006 elections are expected to be more competitive than usual. Yet even a loss of 15 Republican seats in 2006 would represent only 3.4 percent of the House of Representatives.

One reason for the lack of competition is that districts have been drawn with increasing sophistication to favor one party over the other. But communities have also become more politically homogeneous. No one redraws county lines to benefit politicians, yet the segregation of Democrats and Republicans at the county level increased by 47 percent during the last quarter of the 20th century. This is a bad sign for the next generation of citizens.