On Saturday, Laurie Goodstein wrote a story in the New York Times about a Minnesota megachurch pastor, Rev. Gregory A. Boyd, who has broken with the conservative movement. He is not the only evangelical in revolt against the GOP, and the political implications are interesting. But I was struck by something different in the article: a point of theology and biblical interpretation. According to Goodstein’s paraphrase, Rev. Boyd said that “Christians these days [are] constantly outraged about sex and perceived violations of their rights to display their faith in public. ‘Those are the two buttons to push if you want to get Christians to act,’ he said. ‘And those are the two buttons Jesus never pushed.'”

Indeed, I cannot think of an episode in which Jesus demands the right to display his faith in a public setting, nor a moment when he expresses outrage about sexual behavior. In fact, there are two Gospel passages in which he does quite the opposite.

Chapter 12 of Mark ends with Jesus teaching in the Temple (a public edifice devoted to religious ceremony). Four brief episodes within that chapter praise privacy or discreetness in matters of faith. First, some Pharisees ask Jesus whether it is permissable to pay taxes using a coin that bears a graven image of Caesar Augustus, who is portrayed blasphemously as a god. Jesus replies that a public expression contrary to his belief is of no consequence; what matters is his inward faith. “Render to Caesar the things that are Caesar’s, and to God the things that are God’s.”

Next, a scribe “discreetly” accepts Jesus’ interpretation of Moses’ Law. The scribe confesses to Jesus that the whole Law means this: “to love [God] with all the heart, and with all the understanding, and with all the soul, and with all the strength, and to love his neighbour as himself, is more than all whole burnt offerings and sacrifices.” The scribe’s discretion–as well as his rejection of public ceremony–seems to please Jesus.

Then Jesus inveighs against those who make a show of their faith:

Beware of the scribes, which love to go in long clothing, and love salutations in the marketplaces, and the chief seats in the synagogues, and the uppermost rooms at feasts: which devour widows’ houses, and for a pretence make long prayers: these shall receive greater damnation.

And finally he singles out a woman who, I have always imagined, makes her modest contribution very discreetly, out of shame for her poverty:

And Jesus sat over against the treasury, and beheld how the people cast money into the treasury: and many that were rich cast in much. And there came a certain poor widow, and she threw in two mites, which make a farthing. And he called unto him his disciples, and saith unto them, Verily I say unto you, That this poor widow hath cast more in, than all they which have cast into the treasury: For all they did cast in of their abundance; but she of her want did cast in all that she had, even all her living.”

While Mark 12 is about public displays of faith (and therefore relevant to debates about prayer in school), the great text for understanding Jesus’ view of sexuality is John 8:2-11, the story of the “Woman Taken in Adultery.” It’s a rich and controversial text, and I have pasted my own interpretation below the fold. (This comes from my book-in-progress about Dante.)

END_OF_DOCUMENT_TOKEN_TO_BE_REPLACED 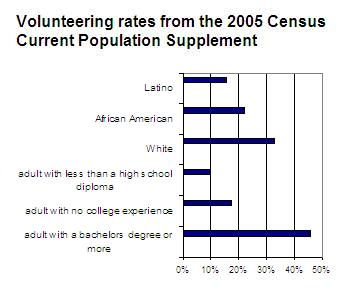 Volunteering has advantages for those who do it: it educates and connects people to their fellow human beings. That’s one reason to be concerned about the gap in volunteering. We might also worry that, if most volunteers are well-off and White, there will be inadequate volunteer services in disadvantaged communities. And privileged volunteers may misunderstand or patronize those they serve.

If we are concerned about this gap, we could try to close it by providing more service opportunities and support (including perhaps financial support) for less advantaged Americans.

On the other hand, there is a class-bias inherent in the concept of “volunteering.” If a person with a paid day-job helps other people’s kids at the local school, that’s volunteering. However, if a stay-at-home Mom carefully monitors the neighborhood kids, she is unlikely to describe herself as a volunteer. And if a person chooses to work as a public school teacher, she isn’t a “volunteer” unless she also helps after-hours at a soup kitchen or cleaning up a park.

Thus it’s possible that it’s not actual volunteering that’s mal-distributed, but only the way we define it.

Joshua Goldstein is a young American who lives and works in Uganda. He has written a very interesting essay for his blog about new media in Africa. He argues that blogging, in particular, can help build respectful, human relationships between the developed world and the Global South. (In the interests of full disclosure, Josh is a former Maryland undergraduate–but not a student of mine.)

Here’s an argument, inspired by Tocqueville, that we can assess the health of a democracy by examining the heterogeneousness of its culture.

Truly engaged citizens produce diverse cultural products. That is because cultural identity is always contested; it provokes debates, parodies, and expressions of dissent as well as consensus. Besides, engaged people clump together in communities and associations, each of which inevitably takes on a distinct character. Many communities and associations choose to display their identities through music, statuary, graphic design, narrative history, and other forms of culture.

Conversely, a homogeneous, mass culture is a threat to civic engagement, because when only a few people produce products that reach a mass market, they obtain great influence. Today, various groups of Americans criticize mass culture for being secular, materialistic, superficial, violent, sexist, and racist, and for undermining local, traditional, and minority cultures. These critiques are not always mutually consistent and may not all be valid. But it seems clear that people feel powerless to change mass culture; that feeling demonstrates the tension between mass culture and democracy.

Mass culture is, in part, a product of corporate capitalism. Capital investment increases the audiences for certain books, films, and songs. Sometimes corporate power is relatively weak: for instance, when there is competition among many producers (as in the Jacksonian era of small printers or in today’s age of blogs), or when the government sponsors cultural production (as in Western Europe). However, there remains an intrinsic tendency for liberal and democratic societies to develop mass cultures.

When people are free to choose which cultural products to consume, a small handful of products become enormously more popular than the rest. It is not certain why this occurs, but it seems plausible that people want to know what other people are reading, hearing, or viewing; thus they gravitate to what is already popular, making it more so. That instinct is perhaps especially strong in a democracy, where people are taught to believe that average or majority opinion is a reliable guide to quality. Books are advertised as “best sellers,” movies as “blockbusters,” and songs as “hits” because democratic audiences trust popularity. In aristocratic cultures, on the other hand, elites have disproportionate consumer power and tend to view popularity as a mark of poor quality. Aristocrats want to have unusual tastes. As Tocqueville wrote:

Among aristocratic nations every man is pretty nearly stationary in his own sphere, but men are astonishingly unlike each other; their passions, their notions, and their tastes are essentially different: nothing changes, but everything differs. In democracies, on the contrary, all men are alike and do things pretty nearly alike. It is true that they are subject to great and frequent vicissitudes, but as the same events of good or averse fortune are continually recurring, only the name of the actors is changed, the piece is always the same. The aspect of American society is animated because men and things are always changing, but it is monotonous because all these changes are alike.

Tocqueville thought that mass culture posed a serious threat to liberty. But he proposed a solution. Strong voluntary associations would have the means and the incentive to produce differentiated alternatives to mass culture.

As a follow-up to yesterday, I want to emphasize that Israel may defend itself. However, as a democracy, it needs national unity and the authentic support of fair-minded outsiders. Both will come only if Israel has a reputation for actively seeking a just peace.

Today, Prime Minister Olmert’s office said that “Israel has no intention of harming the Lebanese population and that Israel is fighting against the Hezbollah terrorist organization and not against the Lebanese government or its citizens. … The prime minister said he was very sensitive to the humanitarian situation in Lebanon.”

This is something you have to show and not just say. In fact, treating Lebanese refugees as simply a “humanitarian” problem threatens to reduce their self-respect. Given Israel’s overwhelming conventional military superiority, it should take pains to:

The last precept would be more difficult to follow if killing civilians in aerial attacks were Israel’s most effective means of self-defense against Hezbollah’s rockets. However, I doubt very much that that is the case.

[Update: See Gideon Levy’s “Days of Darkness” in Haaretz: “Israel is sinking into a strident, nationalistic atmosphere and darkness is beginning to cover everything. The brakes we still had are eroding, the insensitivity and blindness that characterized Israeli society in recent years is intensifying. …”]