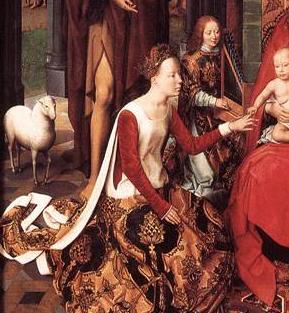 Last week in Bruges, Belgium, at the medieval Hospital of St. John, we saw an altarpiece by Hans Memling that’s sometimes entitled the “Mystic Marriage of St. Catharine.” (The picture to the right is just a detail; click here for a photo of the whole original painting.)

Even if you knew nothing about this work, you might like it–not necessarily in a digital photograph, but in its original 31 square feet of paint. The figures are extraordinarily realistic. The cloth is rich; the colors are luminous and balanced. The woman wears an expression of repose and kindness. Her pale white skin, the ruddier skin of the man behind her, and the wool of the lamb create interesting tactile contrasts. However, if you somehow thought this were a modern illustration, you might not give it a great deal of thought. You would have to acknowledge the artist’s technique, since practically no one can paint light, texture, and skin so naturalistically today. But then again, naturalistic oil painting isn’t very useful now that we have color photographs. And if the image turned out to be a photo of models in medieval clothing, it would be downright strange.

Actually, the altarpiece was painted from 1474-79. That fact makes it much more beautiful than it would otherwise be, I believe. But how can an external fact increase the beauty of an image? The colors would be as rich and harmonious if they had been painted yesterday.

I think that the date and provenance of a work are relevant to its aesthetic value–for two reasons. First, a painting can evoke a whole lost culture. Flanders in the 15th century was cruel, superstitious, oppressive, dirty, and sometimes vulgar. (There is even some vulgarity in the right wing of the “Mystic Marriage of St. Catharine.”) The same civilization was also dynamic, prosperous, and vigorous–the world’s leader in international commerce–yet capable of spiritual purity and calm. An image like Memling’s altarpiece reflects the best of its entire cultural milieu, which greatly increases its beauty.

Second, a great work from the past belongs to the “history of art.” We tell this story as a series of discoveries and revolutions (borrowing ideas from other fields of history). It is a heroic tale, beginning with the Archaic Greeks and ending with Picasso and Matisse, if not with post-modernism. Each era or movement is described as solving problems or overcoming prejudices inherited from the past. Once the great artists of a particular moment have solved their problems, we no longer admire repetitions of their success. Thus Memling is impressive because he can imply complex interactions among multiple figures much better than his teachers, Van Eyck and Van der Weyden, could. But any journeyman artist of the 17th century could place eight people in an organized open space and show how each related to the others. So what is original in Memling is commonplace two centuries later. And what is original is also beautiful, because we view the whole history of (Western) art as a moving narrative.

Our emphasis on the historical development of art is itself a feature of our own civilization, not something universal. The first people to tell heroic stories about the development of art were Pliny and Vasari, each coming after a great era of creativity. Their way of appreciating painting and sculpture works perfectly in a secular museum, less well in a temple or a church, which has a different purpose. Memling himself would have had a very limited understanding of the history of art, as shown by the fact that he placed biblical figures in late-Gothic, Flemish settings. Yet our historical sense is what makes us find Memling so beautiful.

1 thought on “aesthetics and history”