In 2008, for the first time in history, more young people than older people said that they had volunteered for a campaign. That tells an important story about how the Obama campaign in particular–and perhaps other political campaigns as well–engaged young people. The 2008 election was also a much more inclusive one than we had seen for some time, based on the proportion of Americans who said they had “done any work for a party or candidate.” 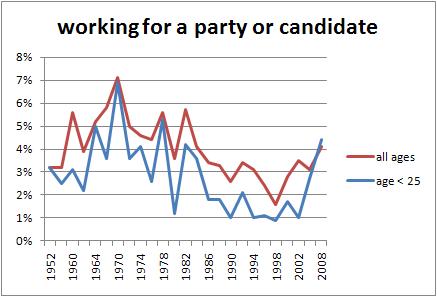 On the other hand, the long-term trend is a decline in political volunteering, as campaigns have evolved from broad, grassroots, labor-intensive efforts requiring many willing volunteers to highly professionalized enterprises driven by fundraisers, media consultants, and pollsters. Politicians are now more dependent on donors and less reliant on popular support. A very important question is whether 2004-8 was a blip or the beginning of an upward trend. (Source: American National Election Studies, analyzed by me.)

1 thought on “young campaign volunteers in 2008: the numbers”