In September, I am supposed to give a talk that’s essentially about the relationship between academics and other citizens. Based on anecdotal experience, I assumed that professors tended to be secular, internationalist, and skeptical of capitalism, whereas the median American was religiously Christian, nationalist, and pro-market. That gap in opinion would affect debates about spending on higher education, academic freedom, and the role of scholarship.

I wanted to go beyond personal impressions, if possible. The General Social Survey allows us to compare the political views of people by their profession. In order to include enough “post-secondary teachers” in the sample to get statistically meaningful results, I had to combine all years from 1980 to 2002. That is a misleading method if there were big changes in the professoriat over those 22 years. However, I still find the results interesting. 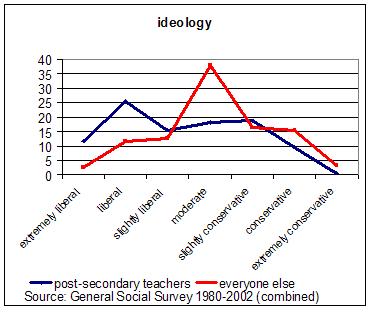 The first graph (above) shows the distribution of self-reported ideology among professors and everybody else. Non-professors formed a bell curve during the period 1980-2002, with the median at “moderate” and roughly symmetrical tails in either direction. Professors were far more liberal.

This comparison could be misleading if professors defined “liberal” differently from other people. However, a second graph provides direct evidence about opinion on issues. 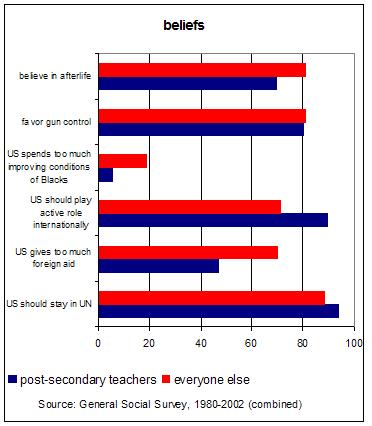 Professors had about the same views of gun control as everyone else (presumably because most people favored it). On all other issues, professors were more liberal–although not by gigantic margins.

[Update, 9/29: Chris Uggen offers better data than I provide above–although my data are also relevant–and he scores some good points in arguing that the ideological tilt in sociology is a real problem.]

2 thoughts on “ideology in academia and elsewhere”