Joel Westheimer’s and Joe Kahne’s typology of civic education programs and their intended outcomes is justly seminal in the field of civic education.* Many civics people are familiar with their distinctions among “personally responsible,” “participatory” and “justice-oriented” citizens as the goals of real-world programs and curricula. Most reflective educators favor the last type, although the first type is the most common in everyday practice. 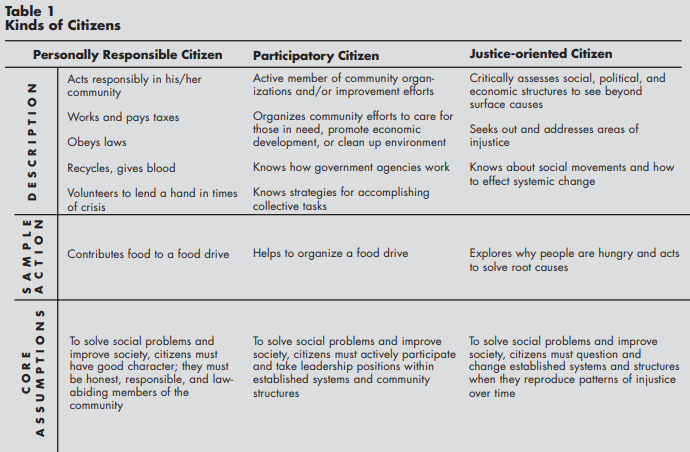 Discussing their article in an undergraduate course in which we also read Martin Luther King, Jr’s book Stride Toward Freedom, I was struck by how perfectly the first two columns describe the people who won the struggle of the Montgomery Bus Boycott. They “volunteer[ed] to lend a hand” so that thousands of Black workers could get to and from their workplaces without using the segregated buses. They had long traditions of belonging and tithing to churches, so they could be organized in their pews to support a boycott. They “obeyed laws,” except when they broke very specific laws as part of civil disobedience campaigns, and they followed the emergent rules of their own movement. They knew “how government agencies worked”–so well that they won federal lawsuits. And they were brilliant at “strategies for accomplishing collective tasks.”

To be sure, they were also justice-oriented. That is why I cite them as an example. Justice rolled down like waters. But imagine a bunch of individuals who “critically assessed” the “structures” of white supremacy and “explored” its “root causes,” asking whether it was fundamentally based in racism, or imperialism, or capitalism, or in-group bias, or law and government, or the fallen state of Man. These people might be justice-oriented but completely ineffective–hence complicit in the maintenance of the system.

If most schools try to impart personal responsibility and evade the question of justice, then it’s important to put the debate about justice on the educational agenda. But in circles where people are eager to debate the root causes of injustice, it’s vital to study how to identify levers for change, organize individuals to contribute their time and effort, and get things done.

Source: Westheimer, Joel, and Joseph Kahne. “Educating the “good” citizen: Political choices and pedagogical goals.” PS: Political Science & Politics 37.2 (2004): 241-247. See also: against root cause analysis; increasing the odds of success for young people’s civic work; social movements depend on social capital (but you can make your own); and the kind of sacrifice required in nonviolence