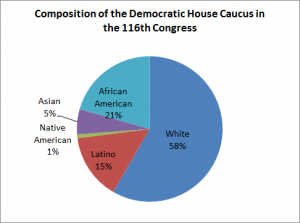 Here is the racial/ethnic composition of the Democratic House caucus for the next Congress.*

Nobody awarded these representatives their jobs; they won campaigns. And within the caucus, two of the five top leaders will be African Americans; a third leader will be Latino.

In the great sweep of history, we have seen Europeans dominate the globe: genocidally replacing whole populations, transporting millions as enslaved people, and directly colonizing or else economically exploiting most other countries.

In North America, some of them created a republic on land that their ancestors had taken by force, writing slavery into its charter. But the republic also made an appeal to equality, and the indigenous and enslaved people helped to build its physical assets and its culture from the start. Its people gradually turned this republic into more of a democracy, often against the will of a majority of the citizens of European extraction, but with key support from some of them.

And now we are seeing glimpses of a future in which the descendants of enslaved people and dispossessed people and refugees and economic migrants will hold a controlling stake in the world’s most powerful nation. For eight years, the son of a Kenyan man was the chief executive and the head of state. The governing party in the US House is still majority-white, but now just by a whisker. Nothing will pass the House without substantial support from members of color within the Democratic caucus.

The prime minister of Ireland is of Indian extraction. Many European countries score higher than the US on standard measures of equity. But nowhere in Europe will descendants of the Global South form a durable governing majority. Nor have people of color been part of their cultures all along. In the US, the backlash to equality is powerful, resistance is strong, and success is by no means inevitable. Still, if we listen hard, we can hear some of Leonard Cohen’s music beginning to play:

*Data from USA Today on Nov. 12. The current tally may be slightly different, and I did not fact-check whether anyone who belongs to two minority groups was counted twice. But this is close to accurate.