In the Washington Post, Colby College English professor Aaron Hanlon argues that postmodernist theorists didn’t inspire or prepare the way for Donald Trump and other politicians who openly disparage truth. Rather, postmodernists lamented a world in which propaganda and media manipulation badly distorted our understanding and judgment. The death of truth “was a diagnosis, not a political outcome that [Lyotard] and other postmodernist theorists agitated to bring about.” Thus, as the Post’s headline puts it, “Postmodernism didn’t cause Trump. It explains him.”

I think I agree with every sentence in Hanlon’s article, which is a valuable contribution. But he seems to omit an important dimension: our changing views of journalism, science, and scholarship.

Most thoughtful people have long been concerned about political propaganda (in the narrow sense). Lippmann, Dewey, Orwell, Arendt, Hayek, and many others worried that politicians who obtained influence over the state could distort public opinion and obfuscate the truth. That concern has been a central theme in liberalism since long before postmodernism.

Hanlon makes the French postmodernists sound like liberals, in this sense:

But if we bother to understand Baudrillard’s thesis — that our impressions of the [First Gulf War] conflict have been warped by media framing and agitprop — it’s clear that the real enemy of truth is not postmodernism but propaganda, the active distortion of truth for political purposes. Trumpism practices this form of distortion on a daily basis.

But postmodernism also treats natural science, other forms of scholarship, professional disciplines like law, and independent journalism as purveyors of propaganda rather than pursuers of truth. The validity of science, for example, was the issue in the “Science Wars.” Postmodernism is concerned about “the active distortion of truth for political purposes,” but it extends “politics” to laboratories, classrooms, and newsrooms as well as elections and governments.

In the 1980s and 1990s, people who defined themselves as postmodernists were quick to reject the pretentious of institutions like scholarly disciplines and The New York Times. Nowadays, similar people are more likely to defend the elite consensus on matters like climate change, to use findings from social science in their arguments, and to decry the failure of politicians like Donald Trump to respect the truth as presented in venues like The New York Times. On the question of whether The Times or the NSF is a source of truth, Trump sounds like the postmodernist.

Pure objectivity is a myth, almost universally acknowledged as such. However, if you don’t like what influential people are claiming to be true, you have options. First, you can decide where you stand on a spectrum from relativism (“Any claim depends entirely on who makes it”) to critical objectivity (“There are obvious truths that are being overlooked or concealed because the people in charge of knowledge are bad”). Another spectrum goes from reformist (“New people and new research agendas should be incorporated into the institutions that produce knowledge”) to separatist (“We need new institutions to produce knowledge.”) Since these questions are independent, four options result: 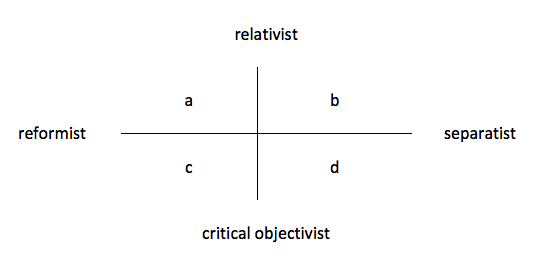 When French postmodernism arrived in the US, much of the academic left was reformist and somewhat relativist, or so I recall. A common view was that science and scholarship were valuable pursuits, but they needed to be substantially diversified. Humanists tended to doubt the claims of objectivity made by their colleagues in the sciences. Works like Peter Novick’s That Noble Dream: The ‘Objectivity Question’ and the American Historical Profession (1988) extended the critique to the humanities. Thus many academics found themselves in Cell A, although some self-described leftists argued that it was a fundamental mistake to undermine objectivity; they defended Cell C.

In that context, French postmodernism was strongly relativist and at least implicitly separatist. Its critique of established institutions (universities, clinics, newspapers, etc.) was radical enough to suggest the need for alternatives–whole new institutions, or perhaps anti-institutions. It made a case for Cell B that many accepted with caveats or else resisted.

At that time, most of the academic right claimed to be strongly anti-relativist and also reformist (Cell D). They viewed relativism as an insidious attack on core values. Conservatives were reformist because they thought that conservative voices were marginalized in the academy and the media and deserved more prominence. Conservatives believed in truth and wanted to change who spoke most powerfully about the truth.

However, some conservatives were separatist: Cell D. They might gravitate to the Federalist Society, the Liberty Fund, evangelical colleges, conservative think tanks–or even “Creation Science”–as alternatives because they had given up on the academy and government-funded science. They believed in objectivity but had lost faith in professors and reporters to produce or disseminate it.

I think a lot of the academic left today falls in Cell C. They believe that real knowledge is possible but that we must enhance diversity in newsrooms, laboratories, universities, and funding agencies in order to get closer to the truth. “Diversity” refers not only to the demographics of the researchers and reporters–although that is important–but also to their topics and methods. Many academics on the left are vigorous defenders of tenure, federal science funding, public radio, and other bulwarks of fairly traditional knowledge-production. Women Also Know Stuff is a perfect example of Cell C.

This means that the academic left shares some of the values that animated conservatives during the 1970s-1990s. Meanwhile, there are strands of the right that now prefer Cell B. They debunk truth, doubt the value of independent scholarship, and want to create alternatives to Fake News, lying scientists, etc.

It’s in that respect that French postmodernism presaged the era of Donald Trump.

See also: Bernard Williams on truth as a virtue of the humanities; conservative relativism; teaching evolution, creationism, Intelligent Design; and media literacy and the social discovery of reality.