3 And the scribes and Pharisees brought unto him a woman taken in adultery; and when they had set her in the midst,

The “scribes and Pharisees” arrive as an undifferentiated group. They act in concert. No names or adjectives distinguish them, but they share a social role as experts on the law and as men of writing.

The one person who stands out is the woman. She comes passively (presumably compelled). She is the sole female character and the only one who is never described in this passage as either reading or writing.

4 They say unto him, Master, this woman was taken in adultery, in the very act.

The Gospels are written in the past tense, but here the Greek (like the English) is suddenly in the present: “they say.” I think the speakers are living completely in the present moment–so forcefully that it flows into the narration as an example of “implied indirect discourse.” The scribes’ and Pharisees’ mode is to ask what the abstract categories of the written law mean for what is to be done now. They don’t reflect on their pasts, nor on the woman’s future, for she has none in the minds.

5 Now Moses in the law commanded us, that such should be stoned: but what sayest thou?

Here they invoke the written law, the commandment that comes to us from an author (notably, Moses rather than God) through his writing. The text is meant to determine our judgment, speech, and decision.

6 This they said, tempting him, that they might have to accuse him. But Jesus stooped down, and with his finger wrote on the ground, as though he heard them not. 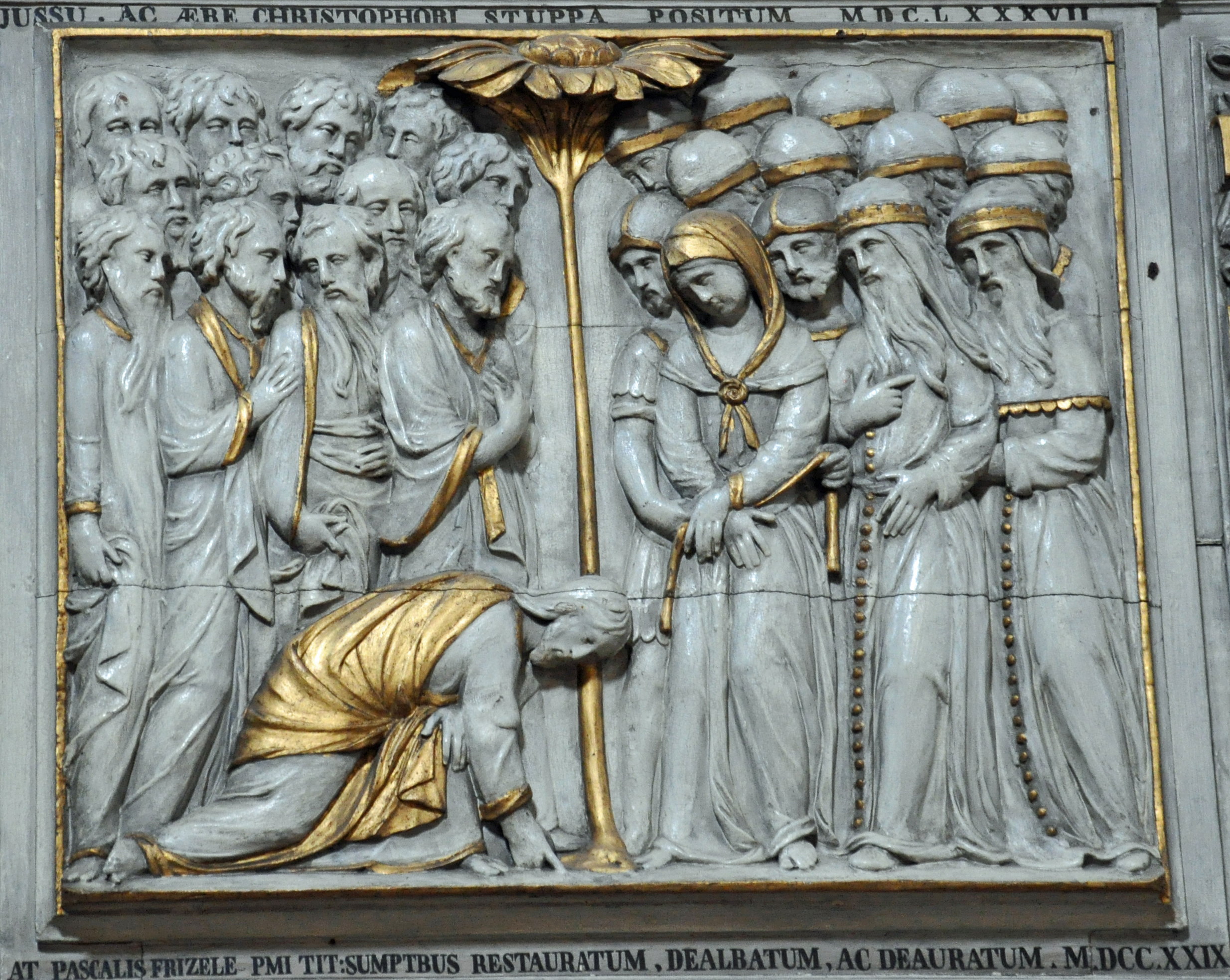 The Woman Taken in Adultery, Church of the Angel Raphael, Venice, 1677

They have set a trap for Jesus. He must either blatantly violate the rule of law or else abandon his message of love. If he does the former, they “might have to accuse him.” In their minds, this would not be a choice. It would be determined by the application of the law, which (again) is an artifact of writing.

So Jesus also writes. Since he stoops down, we cannot see the text that flows. Indeed, it might not be text: the Greek verb katagraphein is unusual (appearing just here in the whole New Testament). It can mean “to scratch,” so Jesus might be making a wordless shape in the dust. Euclid uses katagraphein 40 times in his Elements, as a verb for drawing shapes. It can also mean to “write against,” as in framing an indictment.

Jesus’ act is mysterious. He is literally in touch with the earth. His act is public in the sense that he performs katagraphein as his response to the scribes and Pharisees. It’s private in the sense that we cannot know what he writes; and probably they cannot either, since he “stoops down.”

7 So when they continued asking him, he lifted up himself, and said unto them, He that is without sin among you, let him first cast a stone at her.

They keep asking him, he keeps writing, and then he stands to address them face-to-face (leaving his writing behind) and gives his famous verbal response: “He that is without sin among you, let him first cast a stone at her.”

8 And again he stooped down, and wrote on the ground.

He then goes back down to the earth, to his private stance, and writes. This time the verb is graphein, the ordinary word for writing.

In these verses, the woman is invisible to us. She neither speaks nor writes nor acts.

9 And they which heard it, being convicted by their own conscience, went out one by one, beginning at the eldest, even unto the last: and Jesus was left alone, and the woman standing in the midst.

The scribes and Pharisees are no longer an undifferentiated group, acting in concert and in unison. Each has turned his own mind toward his own past. They exit one by one, making individual choices to break with the group. The one with the longest record of conscience, the eldest, is the first to break. 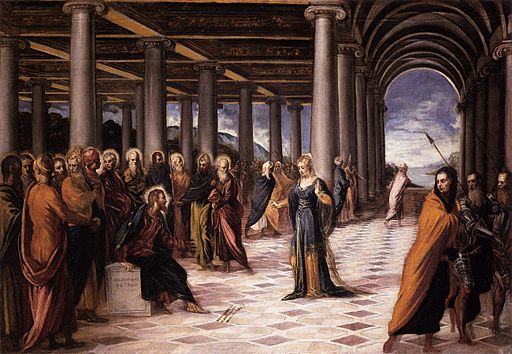 Jacopo Tintoretto – Christ and the Woman Taken in Adultery

Now Jesus is alone, and the woman is “in the midst” (more literally, “being in the middle,” or “being in the center”). It’s just the two of them, quiet. Jesus is still stooped down and does not look at her.

10 When Jesus had lifted up himself, and saw none but the woman, he said unto her, Woman, where are those thine accusers? hath no man condemned thee?

Now he makes eye-contact, as he did earlier with the scribes and the Pharisees, and he asks her what happened, although he must know it already. “Woman, where are those thine accusers? hath no man condemned thee?”

11 She said, No man, Lord. And Jesus said unto her, Neither do I condemn thee: go, and sin no more.

At last she speaks, addressing Jesus as her lord. He speaks in the first person, placing himself in the same position as the Scribes and Pharisees who have chosen individually not to accuse her. And he sends her away from the center, on her own.

What did Jesus write? There is obviously no way to know, but here are some possibilities: 1) He listed the sins of each of the scribes and Pharisees. 2) He noted his own judgment of the Woman, privately. 3) He described the specific situation concretely–in contrast to the abstractions of the categorical law. 4) He drew an abstract image.

Why can’t we know what he wrote?

Why did his act change the situation?

When does private–or public–writing liberate? What about the text of the Gospel of John?

See also: Sessions and the fate of Herod; the Gospels on two hot-button issues; and the prospects for an evangelical turn against Trump.