Fifty years after Dr. Martin Luther King’s assassination–as new social movements are again taking to the streets–a Washington Post-Kaiser Family Foundation poll asked respondents to compare the protests of the late sixties to today. I show responses for all adults and for 18-29s, because I was curious what young adults are learning and thinking about the sixties. 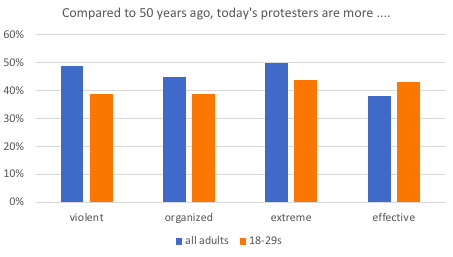 These results are ambiguous, because individuals can have varying opinions of the sixties and of today, but they are only asked to compare the two. A person could think that the protests of the 1968 were terribly violent and extreme, and today’s are worrying but not quite as bad. Or a person might think that the ’60s were violent and it’s great to see some of that righteous rage coming back. Or that neither were violent. By the same token, a person could feel that protesters in the ’60s were well organized, and today’s are even more so, or that both were badly organized. . … And we can multiply the possibilities.

Let’s assume (as a rough approximation) that you are enthusiastic about today’s protests if you think they are organized and effective but not extreme or violent, and that they are at least as good–by those criteria–as the protests of the late 1960s were. So measured, enthusiasm seems reasonably high for all Americans, but higher for youth.

I wouldn’t use these survey results to actually assess the social movements of the sixties vs. our time. I doubt that most people have thought deeply about the wide range of movements in these two rapidly changing periods. For instance, there is an interesting debate about whether the same forms of organization are necessary today as in 1968, but I wouldn’t call random phone numbers to ask the people who answer what comes immediately to mind on this question.

I do find these results interesting as a possible bellwether of support for social movement politics. On the whole, young people seem to perceive the current array of protest movements as reasonably organized, effective, nonviolent, and mainstream. That should encourage them to join.

See also: Why Civil Resistance Works; a sketch of a theory of social movements; the New Social Movements of the seventies, eighties, and today.