A new Washington Post-Kaiser Family Foundation poll provides detailed information about participation in current protests and social movements. The Post leads with: “Tens of millions of Americans have joined protests and rallies in the past two years, their activism often driven by admiration or outrage toward President Trump.” Here, I’ve broken out the data for ages 18-29 and separated the questions into categories.

To begin, 17% of 18-29s would call themselves “activists,” just a point below the whole adult population. They are less sure than older people that they will vote in 2018 (only 37% are “absolutely sure”), but more likely to disapprove strongly of Donald Trump. Just under 20 percent actually voted in 2014, the last midterm election. It will make a great deal of difference whether that number rises in 2018. 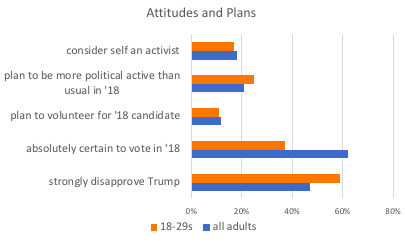 During the past two years, an outright majority of 18-29s have signed a petition, and many have taken other classic political acts. They are less likely than older Americans to give money, but they come close on most other measures of engagement. 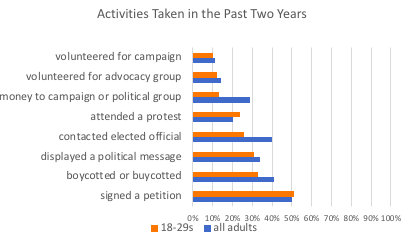 I’ve divided the long list of topics for rallies and protests into right- and left-wing causes. Respondents are asked whether they have personally attended a rally or protest of each type in the past two years.

Under-30s do not appear in detectable numbers in the rallies for Confederate monuments, for oil and gas, or against the Affordable Care Act. About one percent of 18-29s have rallied against abortion, against immigration, or in support of police conduct. Three percent have turned out at physical events for Trump. For right-wing causes, the rates of participation are low for all adults. Most of these are fringe movements. 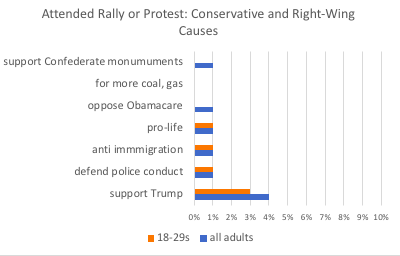 Young adults have been more active on the other side of the political spectrum. Nine percent have marched or rallied against Trump, the most popular cause. (They have been over-represented in the anti-Trump events.) Marches for LGBT rights and immigration have also been popular for youth, and disproportionately so. 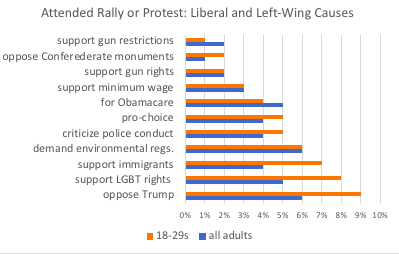 Only one percent have turned out (so far) in support of gun control. However, that could be misleading because students under the age of 19 have played notable leadership roles in the gun-violence movement. I commented on MSNBC about the youth protests against gun violence.