CIRCLE has released a new report entitled “Millennials’ Diverse Political Views: A Typology of the Rising Generation.” From the summary:

Millennials are already the largest group of potential voters and are destined to dominate American politics in decades to come. As a demographically and economically diverse generation, they naturally hold a wide range of opinions. In the 2016 election, for example, voters under the age of 30 split their support: 55% percent for Hillary Clinton, 37% for Donald Trump, and 8% for other candidates.

We use recent data to identify clusters of Americans between the ages of 18 and 34 into five groups:

The two egalitarian groups are concerned about social, political, and economic inequality, and they tend to support government action to combat it. The two libertarian groups are concerned about individual freedom and are more skeptical of government. These orientations characterize some, but not all, core characteristics of young people’s beliefs about the size and responsibilities of government, and whether inequality is seen as a major barrier to progress. 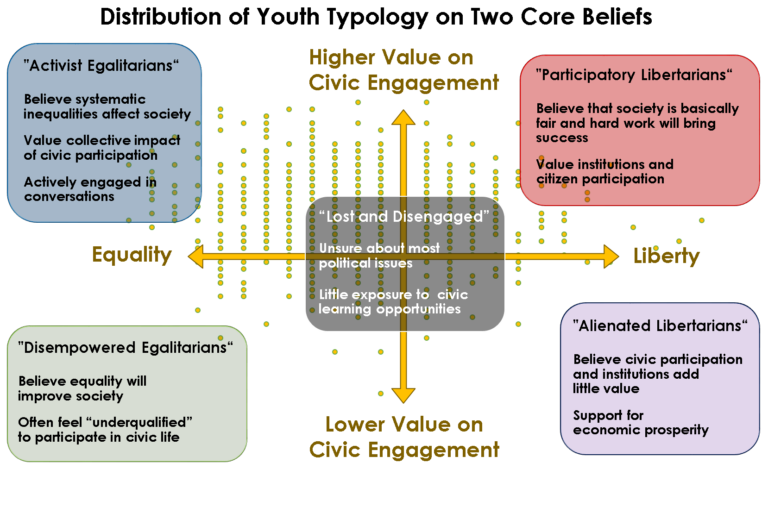 Within both the libertarian and the egalitarian sides, there are disagreements about civic engagement. Millennials of all political stripes differ on whether it is useful for people like them to engage with fellow members of their community or with institutions—or both—to change society. Meanwhile, the Lost and Disengaged do not seem sure where they fall, are disconnected from news media, and largely disengaged from civic life.

There are important demographic and social differences between the groups, particularly related to education and income.

Participatory Libertarians are almost three times as likely to have a college degree as the Lost and Disengaged.

Among the two Egalitarian groups, the Activists are almost twice as likely to have completed college as the Disempowered, more than half of whom have no college experience at all. That a lack of civic efficacy and confidence correlates with these disparities only exacerbates political and social inequalities.

Those who do not believe in the power of people’s collective work in communities and society vary not only on their Egalitarian-Libertarian polarity, but also on why they may not believe that people can make a difference:

Disempowered Egalitarians acutely feel social inequities but may be hopeless that anything could change.

Alienated Libertarians appear to worry about individual prosperity first and foremost and believe that everyone should look out of themselves rather than work with institutions or with each other.

It is encouraging that a majority of young people of diverse ideologies believe that they should work with others to benefit society and communities, and that civic institutions can play a positive role if they are kept accountable. Still, a troublingly sizable minority are unconvinced that they and their fellow citizens can effect change, and/or feel unqualified to contribute to civic life. Engaging these young people will be challenging, but it is not impossible. We must implement multi-pronged, short- and long-term strategies for engagement that support all young people as they develop their civic and political identity. And we must ensure that Millennials have the resources and opportunities to express their identities with a loud and clear voice, and to turn that voice into effective action.