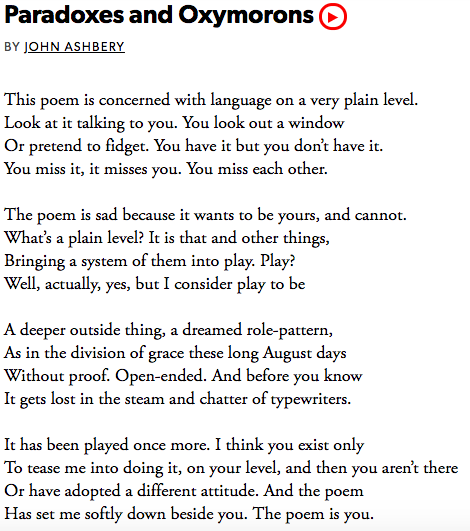 A “plain” is a level place. Some plains are places that were leveled. Isaiah 40:4: “Every valley shall be raised up, every mountain and hill made low; the rough ground shall become level, the rugged places a plain.”

A “level” is a device for seeing whether things are flat. It helps us put different objects on the same level or on the same plane.

If you “level” with people, you give them the plain facts, no playing around.

“Play”: an activity conducted for enjoyment, not for a practical purpose. It is activity without an end. Two people can play, which requires cooperation as well as competition. You can be played. “To play”: to turn written music into sound. A play is also a thing with an opening and an ending.

“Attitude” is the orientation of an object, such as an airplane, relative to the level ground. A level would be needed to measure a plane’s attitude. If you were trying to hit a target with a plane, a level would help you keep the attitude right so that you wouldn’t miss it.

If you Google “division of grace,” the first hit is Thomas Aquinas’ Summa Theologiae, First Part of the Second Part, Question 111, “The division of grace,” which begins, “Whether grace is fittingly divided into sanctifying grace and gratuitous grace?” Part of his answer: “gratuitous grace … is bestowed on a man … not to justify him, but rather that he may cooperate in the justification of another …” Aquinas proves this point with authorities and reasons.

John Ashbery didn’t have Google. I have no idea whether these obscure puns that I found by searching the Web were on his mind. But he already lived in a world of words, excessive words, words that referred to each other, that demanded attention, that bored, that confused. “It gets lost in the steam and chatter of typewriters.”

(“It?” There is literally a missing word “it” in the phrase “And before you know /It gets lost …” What gets lost? “It” is so lost that it’s not even printed in the poem.)

A poem is just a string of words. That is all it is at a “plain level.” We are deluged with words. Most text is not poetry, but even poems are enormously common, and most of them are worth very little. To write something that qualifies as a poem is easy–you just type. You make a keyboard chatter until you have rows of words. Unless your name is John Ashbery, chances are low that anyone will read those lines.

Still, if you’ve poured yourself into those words, you want someone to follow them, to play with them, to concentrate on their levels of meaning, including the levels that were plain and the ones you never noticed. You don’t want them looking out a window and fidgeting. (Let alone pretending to fidget! Who pretends to fidget?)

A poem and you are like possible lovers, but the poem doesn’t have much of a chance; there are so many other words that you could notice instead. The poem will be sad if you don’t play with it.

But suddenly, in the final stanza, you and the poem are joined by a third party. “And the poem / Has set me softly down beside you. The poem is you.” Who is this “me”?

As long as the story is about a poem wanting to connect and feeling sad, it’s all fun and games: wordplay. But when you realize that the poem is the voice of a human being who wants to connect with you, suddenly it’s not just play but also love.