As a political philosopher, I’m trained to think about justice versus injustice. Both terms are controversial. It would be hard to find two people (even two who might be labeled “social justice warriors”) who define “justice” exactly alike. We each put together our own recipes using various combinations and flavors of liberty, equality, happiness, solidarity, sustainability, rights, voice, agency, status, security, and other values that conflict in practice. Injustice is equally complicated, and it may not mean the mere absence or negation of justice. But although the polarity of justice/injustice does not generate consensus, it structures many of our debates.

There’s another polarity that plays an analogous role for people who have been strongly influenced by Gandhi or the Civil Rights Movement: for instance, people who work in Peace and Conflict Studies.  This is the polarity of violence versus peace.

Again, both terms are complicated. Just as it won’t really work to define “justice” as equality (Equality of what? For whom? Equality and nothing else?), so it doesn’t work to define violence as physical assault, or peace as the absence of violence. Like justice, peace can provide the framework for a discussion in which various definitions are proposed and defended.

The following schematic diagram depicts these polarities as two different axes. It implies that it’s conceptually possible to have an unjust situation of peace or a just case of violence. Consider, for example, the imprisonment of a former dictator. He is arrested at gunpoint and forced into a cell (violence) but that’s a manifestation of justice. This case belongs in the bottom-left quadrant. On the other hand, situations of political quiescence involve living in injustice without any conflict: the top-right. 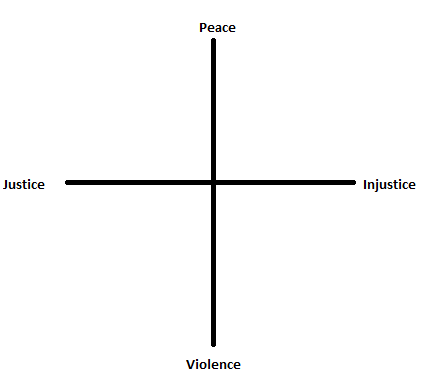 Some would argue that (true) justice is (true) peace; and injustice equals violence. Then the schematic is wrong; there is just one continuum whose ends should be labeled “Peace/Justice” and “Violence/Injustice.”

Or it could be that peace is a component of justice but not the only component. Perhaps you can’t have perfect justice with violence, but you can have a violent situation that’s more just than a peaceful situation would be, if the former scores higher on liberty, equality, or some other value.

My general instinct is to resist smooshing values together, because then we fool ourselves into ignoring tradeoffs. For instance, I don’t like to load lots of values into the definition of “democracy.” I prefer to define it as a system for making binding decisions in a group that affords everyone roughly equal influence. Then we can ask whether democracy requires or implies other values, such as social equality or freedom of speech, or whether it conflicts with these values. The same logic would encourage distinguishing between peace and justice as two different goods.

I have not made up my mind on this question, but here’s a text with which to think about it. Dr. King visited Joan Baez and other anti-war protesters in prison in Santa Rita, CA, on Jan. 14, 1968. Addressing a crowd outside the prison, he said (in my transcription from the audio):

There can be no justice without peace and there can be no peace without justice. People ask me from time to time, ‘Aren’t you getting out of your field? Aren’t you supposed to be working in civil rights?’ They go on to say, ‘The two issues are not to be mixed.’ And my own answer is that I have been working too long and too hard now against segregated public accommodations to end up at this stage of my life segregating my moral concerns. For I believe absolutely that justice is indivisible and injustice anywhere is a threat to justice everywhere. And I want to make it very clear that I’m going to continue with all of my might, with all of my energy, and with all of my action to oppose that abominable, evil, unjust war in Vietnam.

The first sentence might mean that peace and justice are always causally connected: one is necessary for the other. But then it becomes clear that King’s struggle for Civil Rights is about “justice,” and his opposition to the war is about “peace,” and he wants to connect these two concerns because they are both “moral.” That implies that justice and peace are two distinct components of a larger category: what is moral or right. Finally, King defines the specific war in Vietnam as unjust, leaving open the possibility that a different war (e.g., the US Civil War?) might be just. In that case, peace in Vietnam is a necessity of justice but not because it will bring about peace; only because the war is an injustice.

At another level, of course, King insists on peace as a strategy for justice. Active nonviolence is an ethical and effective method in a wide range of circumstances, with a better record of success than violent insurrection has. But analytically, we could still distinguish between peaceful and just means and between peaceful and just ends and then ask when any of these four go together.

See also:  the kind of sacrifice required in nonviolence; social justice should not be a cliché; and we are for social justice, but what is it?