This isn’t a travel blog, and my photos aren’t very good, but here are some images that hint at Ukraine’s history as a borderland (which is its very meaning). 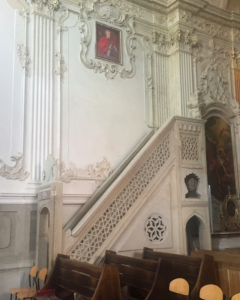 a minbar (the staircase a preacher ascends in a mosque) is preserved inside the rococo church of St Nicholas in Kamyanets-Podilsky.

The same city’s cathedral preserves a minaret. The Ottomans had built towers all around this building, as at Aya Sofya in Istanbul. When the Poles regained the city, they removed the other minarets but had to retain this one for structural reasons. They surmounted it with a gold Madonna.

At Khoytn, the border is symbolized by a massive fortress, built and partially leveled in sequence by Christian, Muslim, Christian, and modern totalitarian armies. 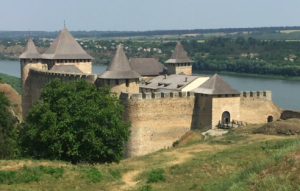 In Chernivtsi, while it was still Austro-Hungarian Czernowitz, each “nation” had a handsome cultural house of its own: the Romanians, the Ukrainians, the Germans, the Poles, the Jews. The Ukrainian house made space for the first international Yiddish conference in 1908, because the city’s Jewish leadership favored German and Hebrew.

Today, the former Jewish People’s House still sports Atlas-type sculptural figures, two of whom are unusual in that they look upward.

In the old auditorium on the third floor, where the stair-rail still shows a Star of David, the stage was set with a cross when I wandered in. The building is understandably used for various community functions today, in a city that is overwhelmingly Christian. This sight was nevertheless a bit disconcerting. (I suspect the Nazis smashed the other Jewish symbols in this room.) 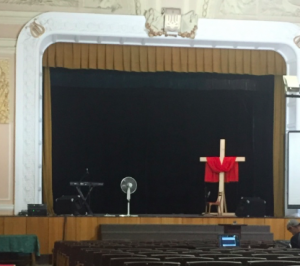 But downstairs is a fine museum celebrating and mourning the annihilated Bukovinian Jewish community, including this mass-produced Hebrew typewriter from the interwar period. 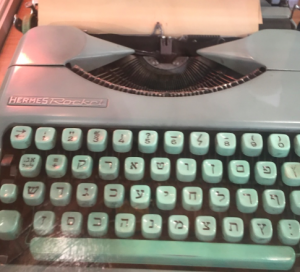 Here is a raffish Art Nouveau/Orientalist building called the “Sorbonne,” in the University area of Chernivisti. I saw it at dusk, when the sunflower’s face had sagged. 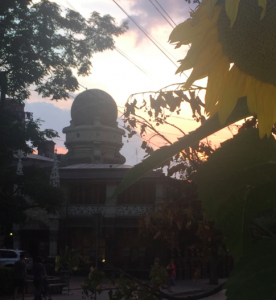 That could be an elegy for the faded elegance of Austria-Hungary. But the sunflower must have turned upward again the next morning, because there’s always a dawn. Half a century after the “Sorbonne” opened, Chernivtsi’s now-Soviet citizens could take off from their space-age airport under a frieze of Sputniks and ICBMs.

History didn’t stop then, either. Since I was last in Chernivtsi in 2015, a cheerful new 24/7 pharmacy has opened across the street from the “Sorbonne.”