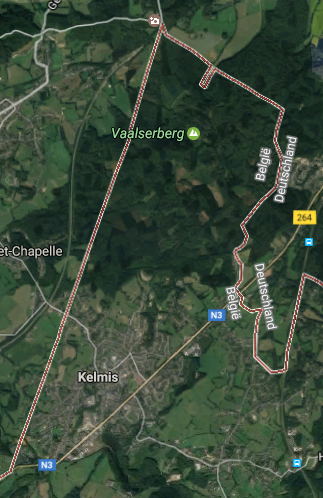 Did you know that there used to be a quasi-autonomous European jurisdiction with a land area of 3.5 km and a population as large as 3,500 that used Esperanto as its official language?

Moresnet (Esperanto: Amikejo, or “friendship place”) lay among Belgium, Prussia/Germany and the Netherlands in roughly the location shown on this Google Map. It was established in 1816 and absorbed into Belgium in 1920. I exaggerate by calling it a “country,” but it was an international condominium with sovereignty shared by Prussia (later, Germany) and Belgium, official neutrality, its own tricolor flag, and a high degree of self-rule. In 1918, a project began to make it Esperanto-speaking; many residents learned the language, and the World Congress of Esperanto named it the capital of the global Esperanto community.

I learned this after reading about Alexander Dubcek, the face of Socialism with a Human Face and a Czechoslovak leader during both the Prague Spring and the Velvet Revolution. Dubcek was conceived in Chicago but born in what’s now Slovakia. He and his family moved to what’s now Kyrgyzstan at age 3. There he and his family lived in an experimental co-op called Interhelpo, where first Esperanto and then Ido (Esperanto for “offspring,” meaning a kind of Esperanto 2.0) was spoken as the main language. In 1943, Stalin liquidated Interhelpo and shot many of its crunchy residents, but by then Dubcek was back in Czechoslovakia, flighting the Nazis. He survived to be a thorn in the side of totalitarian communism, but not–as far as I know–a dedicated Esperantist.

Any dreams of uniting Moresnet and Interhelpo into a confederation of Esperanto states proved (shall we say) utopian.