(Orlando, FL) I’ve settled on a poem with which to express homage to the late Derek Walcott: his “Volcano” (1976)

Joyce was afraid of thunder
but lions roared at his funeral
from the Zurich zoo.
Was it Trieste or Zurich?
No matter. These are legends, as much
as the death of Joyce is a legend,
or the strong rumour that Conrad
is dead, and that Victory is ironic.
On the edge of the night-horizon
from this beach house on the cliffs
there are now, till dawn,
two glares from the miles-out-
at-sea derricks; they are like
the glow of the cigar
and the glow of the volcano
at Victory‘s end.
One could abandon writing
for the slow-burning signals
of the great, to be, instead,
their ideal reader, ruminative,
voracious, making the love of masterpieces
superior to attempting
to repeat or outdo them,
and be the greatest reader in the world.
At least it requires awe,
which has been lost to our time;
so many people have seen everything,
so many people can predict,
so many refuse to enter the silence
of victory, the indolence
that burns at the core,
so many are no more than
erect ash, like the cigar,
so many take thunder for granted.
How common is the lightning,
how lost the leviathans
we no longer look for!
There were giants in those days.
In those days they made good cigars.
I must read more carefully.

Two of “the great” are named in this poem: Joyce and Conrad. Joyce is a foil for Walcott: an exiled former subject of the British Empire who wrote Ulysses, to which Walcott, from a different Atlantic island, replied with Omeros. It turns out that lions did roar at Joyce’s funeral, and one can risk the pathetic fallacy that they roared for the master’s passing. 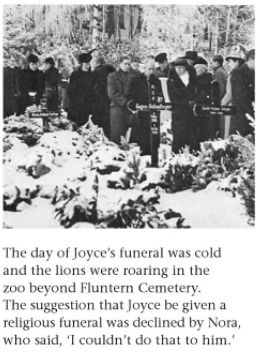 I don’t know Conrad’s novel Victoria, but Wikipedia suggests why Walcott might like it (as long as it can be read as “ironic”). Apparently, it describes yet another colonial island-outpost, this one in the Pacific, from European and subaltern perspectives–offering that double vision that fascinates Walcott. And according to Walcott, it ends with two lights shining on the ocean horizon, one a cigar and one a volcano. Seeing a similar pair of lights on the sea off his Caribbean home, Walcott imagines them as messages from Conrad, who is only “rumored” to be dead because his words still speak.

Walcott, the future Nobelist, has every right to place himself in these men’s company. He strives to write great works, to make his own mark. The poem relates a moment, however, when he considers whether it might be better to devote himself to reading: in fact, to become the “ideal reader.” That is a ruminative life, more modest, quieter, although Walcott’s character still compels him to be the “greatest reader in the world.”

“Volcano” adopts a rhetoric of decline. “Awe … has been lost in our time”; “so many take thunder for granted.” But I think the narrator pokes a little fun at himself for that mood when he says, “In those days they made good cigars.” It’s not really that culture has declined and all the great ones have passed. That’s simply what a person feels when he or she pledges, “I must read more carefully.”

With Walcott gone now, I’d like to think of him as a light from far offshore, sending his slow-burning signals for a long time to come. Best to enjoy them, not try to outdo them, because they really don’t make writers like Derek Walcott any more.