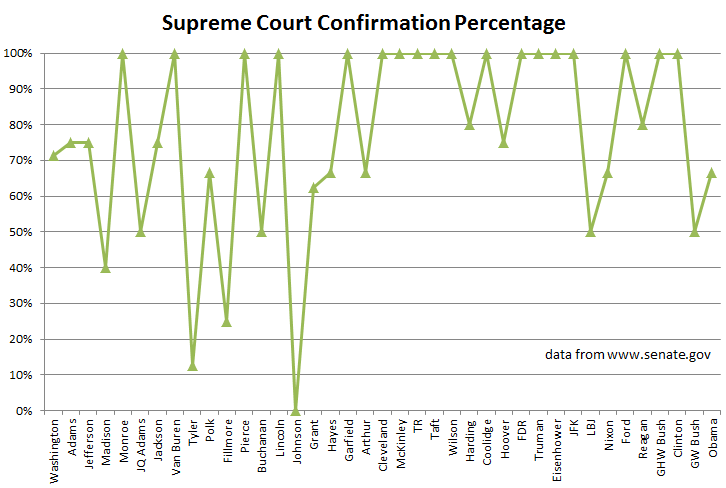 This graph shows the proportion of each president’s Supreme Court nominations who were confirmed as opposed to rejected, withdrawn, or postponed. I draw attention to the rocky record of the antebellum presidents, the very high confirmation percentage between 1900 and 1967, and the mixed story since then.

It’s often said that Robert Bork was the first nominee of modern times rejected on ideological grounds, not because of a scandal. Conservatives (rightly or wrongly) view that episode as the moment when a norm was broken, since 20th century presidents had been allowed to name candidates who met basic qualifications. Liberals now feel equally strongly about Merrick Garland, the first modern nominee not to receive a vote at all, even though he was clearly a moderate. If Democrats filibuster Neil Gorsuch and Republicans end the filibuster, that will be seen as a new stage. The new implicit rule will be: presidents can name Supreme Court nominees when a majority of the Senate chooses to concur, but otherwise the seat stays vacant. In general, we will expect vacancies to be filled when the Senate and White House belong to the same party, but otherwise to remain empty unless the two sides happen to be able to work out a win/win deal.

This trend could be taken as an example of the decline of norms and comity in Washington. I believe in the general truth of that story. However, I would interpret the changing norms for confirmation in a different way. From 1900 until around 1970, both national parties had conservative and liberal wings. Conservative Southern Democrats stood to the right of Republicans on social issues. Some Northern Republican Senators were genuine liberals. This meant that most presidents could assemble majority coalitions on important votes–not only nominations, but also landmark bills and budgets–regardless of which party controlled the majority. A Democrat would use party loyalty and intraparty horsetrading to line up most of his own caucus, adding liberal Republicans to reach a majority. A Republican would do just the reverse to win. As a result, the norm was not only that presidents got their way with Supreme Court nominations (absent scandals) but also that they drove national policy.

Once the parties polarized into left and right, that situation no longer applied. Since then, presidents have really only been able to govern domestically when their party has controlled Congress, although they have increasingly resorted to unilateral executive actions at other times. The only moments of effective governance, as envisioned by the Constitution, have occurred in 1980-82, 1992-4, 2003-6, and 2009-11. The rest of the time has seen stalemate or executive unilateralism.

For Supreme Court nominations, only the Senate matters. Since 1980, 11 justices have been confirmed while the Senate and presidency have been aligned, three (Kennedy, Souter, and Thomas) slipped through despite a hostile Senate, one (Miers) was withdrawn despite unified party control, and two (Bork and Garland) were blocked.

Going forward, I think it’s pretty much inevitable that presidents will get their Supreme Court nominees through when they have majorities in the Senate, and otherwise, they will be blocked. Merrick Garland deserved a vote but would have been defeated under this new norm. Trump gets Gorsuch and can fill other vacancies until he loses the Senate or his own reelection. Democrats should use the filibuster now, so that Republicans have to end it and the underlying rules are clarified. If Democrats win the Senate and White House in 2020, they should use majority votes to appoint strong liberals to the court.

I am not saying the new normal is acceptable, but I fail to see an alternative, and we might as well understand the stakes.

Data from the Senate. See also: is our constitutional order doomed?, are we seeing the fatal flaw of a presidential constitution?, and two perspectives on our political paralysis.