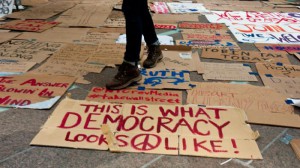 The ideal of democracy gets weak support today.

Republican presidents from T.R. to George W. Bush presented the United States as a champion of democracy. But a current conservative talking point holds that the US is meant to be a republic, not a democracy, and only the opposition party favors democratic forms of government.

It’s my anecdotal impression that not many Democratic voters are all that enthusiastic about democracy, either; they see a population that likes Donald Trump enough to give him a near-majority, and they are not sure they want that majority to rule.

Overseas, the suppression of the Arab Spring, the frailties of the EU, the rise of popular ethno-nationalists in many countries, and the strong performance of  China’s authoritarian regime have left small-d democrats with a hangover. Julia Ioffe is just one of many well-informed commentators who recalled recent failed democratic uprisings when she observed this weekend’s marches. “Talking to the protesters in Washington today, it was hard not to hear the echoes of the weakness of the Moscow protests five years ago: a vague, unstructured cause; too much diversity of purpose; no real political path forward; and the real potential for the meaning of the day to melt into self-congratulatory complacency.”

Meanwhile, impressive scholarly evidence continues to build that people make political choices on the basis of social identities, not by forming independent opinions of issues; that our conflicting moral views have unconscious bases that are “nearly impregnable to arguments from outsiders“; and that voters are badly uninformed. Walter Lippmann (1925) and Joseph Schumpeter (1942) already held this general view, but the accumulating evidence must be taken seriously.

Many thoughtful people have accepted the diagnosis in full. They are aware of democracy’s real maladies. Unfortunately, their commitment to finding cures is much weaker.

After all, any political system is only as good as we make it. There are generic arguments in favor of core principles of democracy, such as “voting equality at the decisive stage” (Dahl 1989), but there are also generic problems with it, such as majority-tyranny, propaganda, free-riding, motivated reasoning, the “iron law of oligarchy,” and polarization. An actual system based on voting equality will work well only to the degree that we build institutions and norms that can counter its weaknesses. For instance, a city newspaper can address low information and polarization in a metro area–as long as it finds a market and uses its revenues to inform the public. A grassroots political party can overcome free-riding problems by getting citizens involved–but only if it engages citizens.

If we want to build the new institutions and norms that can make democracy work in the 21st century, we need a lot of people to see its potential. We must be hard-headed designers and reformers of institutions, our eyes open to human limitations; but we must also hear old Walt Whitman’s music:

The purpose of democracy … is, through many transmigrations, and amid endless ridicules, arguments, and ostensible failures, to illustrate, at all hazards, this doctrine or theory that man, properly train’d in sanest, highest freedom, may and must become a law, and series of laws, unto himself. …

Did you, too, O friend, suppose democracy was only for elections, for politics, and for a party name? I say democracy is only of use there that it may pass on and come to its flower and fruits in manners, in the highest forms of interaction between men, and their beliefs — in religion, literature, colleges, and schools — democracy in all public and private life, and in the army and navy. I have intimated that, as a paramount scheme, it has yet few or no full realizers and believers. I do not see, either, that it owes any serious thanks to noted propagandists or champions, or has been essentially help’d, though often harm’d, by them. …

I submit, therefore, that the fruition of democracy, on aught like a grand scale, resides altogether in the future.

Whitman saw glimpses of that future in his own time, and I think hundreds of thousands of people–including me–scanned new democratic vistas on Saturday. That was the first essential step toward actually repairing our democracy together.