Walter Benjamin was a radical social theorist in the high Continental tradition. John Dewey was an American pragmatist and a democrat. T.S. Eliot was a political reactionary. Despite their differences, they lived around the same time and sometimes made a very similar point: information is replacing wisdom or meaning.

I quote some passages to that effect below. I won’t supply a lot of commentary–let alone any solutions–but I do want to underline the urgency of their point. It’s estimated that people now produce and exchange 2.5 billion exabytes of data every day. All the words that people have spoken since the origins of the species amount to roughly 4 billion exabytes. That means that between now and Friday afternoon, we will create and share about as much new data as we have had time to speak since the early Paleolithic. I’m not assuming that speech is better than text or images, but this comparison underlines the astounding growth in volume. Meanwhile, wisdom seems more or less flat. We hope that increasingly powerful analytical tools can make sense of all the new data, but perhaps they just add another level of transient information.

1.  In “The Storyteller” (1936), Walter Benjamin argues that traditional storytelling took two forms: reports from far away and versions of local tradition. Both forms were oral and social, the storyteller interacting with a live audience. Both were intended to be useful, conveying a moral message or practical guidance and building a community.

The novel, Benjamin argues, undermined storytelling. It existed for many centuries but only grew into an important institution with the rise of the bourgeoisie, for whom information is a commodity with economic value. The novel’s rise was simultaneous with the development of the news media as purveyors of information, epitomized by the French center-right daily newspaper Le Figaro: 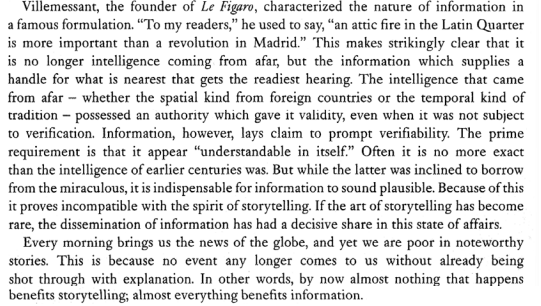 From our perspective, the nineteenth-century novel might seem a repository of profound meaning. For Benjamin, it was already a way-station on the route from meaningful stories (which were concise, ethically demanding, and social) to information as a commodity.

The physical agencies of publicity [of communicating with the public] which exist in large abundance are utilized in ways which constitute a large part of the present meaning of publicity: advertising, propaganda, invasion of private life, the ‘featuring’ of private incidents in a way which violates all the moving logic of continuity, and which leaves us with those isolated intrusions and shocks which are the essence of ‘sensations’ [pp. 168-9] …

‘News’ signifies something which has just happened, and which is new just because it deviates from the old and regular. But its meaning depends on relation to what it imports, to what its social consequences are. This import cannot be determined unless the new is placed in relation to the old, to what has happened and been integrated into the course of events. Without coordination and consecutiveness, events are not events but mere occurrences, intrusions; an event implies that out of which a happening proceeds. … The catastrophic, namely, crime, accident, family rows, personal clashes and conflicts, are the most obvious forms of breaches of continuity; they supply the element of shock which is the strictest meaning of sensation; they are the new par excellence, even though only the date of the newspaper could inform us whether they happened last year or this, so completely are they isolated from their connections [179-80].