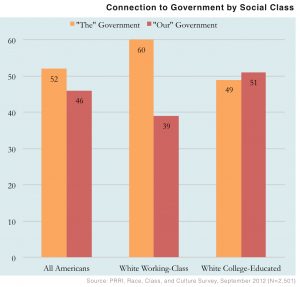 recent long post, I argued that one reason white working class Americans are alienated from government is that they lack the productive political power that comes from organizations, such as political parties that rely on ordinary members, and unions. Moreover, because of the weakness of such organizations, white working class people are simply not visible in positions of power. A few leaders can rightly say that they started life in the working class, but almost by definition, they are now all well-paid and highly educated professionals.

I don’t think they’re wrong. It is “the” government rather than “their” government in a meaningful sense. But as long as they feel this way, and no one offers actual empowerment, they are going to be ripe targets for demagogues who want to blow the whole thing up.