I’m back from a very inspiring meeting of civic activists, civic educators, and students in the White House. It was convened by the Domestic Policy Council along with Civic Nation and the Beeck Center, with support from Tisch College and o 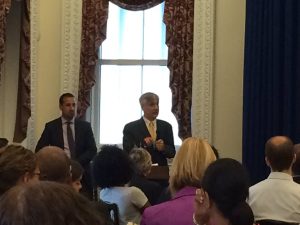 thers. Committed and skillful teachers and students attended from selected schools across the country. These students are not just learning about civic engagement, practicing to be citizens, or developing civic skills. They are at the forefront, right now, of addressing the most serious issues in their communities. We need them, and many more like them, to govern the republic better than it has been governed and to achieve justice that has eluded us so far.

We learned that US Secretary of Education John King is sending a “letter of guidance” to all state education agencies about new federal support for the humanities as part of the “well-rounded” education mandate of the Every Student Succeeds Act. As a humanities person, I am glad about that direction, and as a civics advocate, I’m pleased that civics is included among the humanities.

The US Department of Education has also made civics a core component of the Department’s “Blue Ribbon Schools” program, which recognizes excellence.

Meanwhile, the House Appropriations Subcommittee on Labor/HHS and Education recently passed the 2017 appropriations bill, which includes the first funding for civics and American History in years. The appropriation includes $6.5 million for competitive grants to improve instruction in American history, civics, and geography, particularly for schools in under-served rural and urban communities. It also includes nearly $2 million for American History and Civics Academies: professional development opportunities for teachers of these disciplines. For now, it’s just a House appropriations bill, but it’s an important step toward actual dollars for civics.