Young Americans are not very loyal to parties. Many young people hold political beliefs that may make them almost guaranteed to vote for one party rather than the other–true “swing” voters are very rare–but they don’t identify with parties as organizations or devote their energy to parties as opposed to candidates and causes. I think that is partly why young people have so far been happy to vote for Bernie Sanders over Hillary Clinton by 4:1 margins. Remember that the primary election process was set up to allow party members to choose their party’s nominee, but young people who vote in the Democratic primaries don’t blink an eye to support a candidate who has chosen not to be a Democrat during his political career. I am not saying they should behave differently; I just think it’s interesting.

I have often heard cultural/generational explanations of this trend. Supposedly, Millennials are less favorable to organizations of all kinds. They prefer and expect looser and less hierarchical networks. There may be some truth to that, but I would suggest a different hypothesis. Young people are less loyal to parties than their predecessors were because parties don’t do anything any more.

Parties used to have functions, such as recruiting volunteers, paying workers, and organizing events (not to mention controlling patronage). Parties are now labels for clusters of entrepreneurial candidates and interest groups. The change occurred because the campaign finance reforms of the early 1970s defunded the parties, and then the deregulation of the 2000s allowed vast amounts of money to flow to entities other than parties. The Koch Brothers’ political network, for instance, employs 3.5 times as many people as the Republican National Committee does.

If parties do nothing for or with young people, it is easy to explain why youth don’t care about parties.

The General Social Survey asks about partisan ID at least every other year. The proportion of younger people who are Independents has grown, but most political scientists argue that that trend is misleading since the number of undecided or swing voters has actually shrunk. More to the point are questions that the GSS has asked only twice, about membership and active participation in parties. We know that parties didn’t do much to engage youth in 2004, because Dan Shea surveyed local party leaders that year, and “Only a handful of [county] party chairs mentioned what we might call significant activities, programs that require a significant amount of time or resources.” The parties were already hollow compared to decades earlier. He also asked an open-ended question: “Are there demographic groups of voters that are currently important to the long term success of your local party?” Just eight percent named young voters.

Nevertheless, the GSS indicates that the proportion of youth who actively participated in parties was 3.6 times higher in 2004 than it was in 2014. The hollowing-out continues. 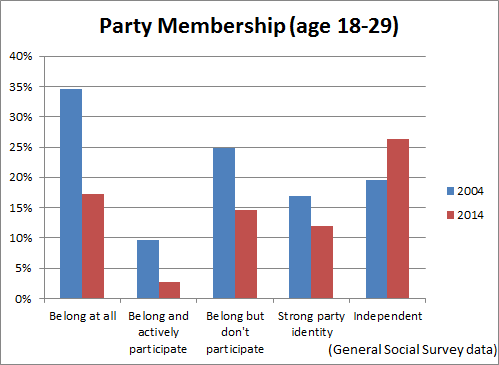