Washington Monthly has a cover story by Phil Kiesling arguing that voting by mail would raise turnout substantially and also produce a more representative electorate, especially in primaries, thus reducing partisan polarization. Kiesling makes many good points, and his argument is definitely worth reading. Among other things, he is right to be frustrated by the research on voting-by-mail, although I wouldn’t characterize the problem as he does–as “the tyranny of dated, superficial, and/or irrelevant, academic research.” In fact, my colleagues and I are responsible for some of that research, and there are reasons that we analyze the data as we do. It is genuinely hard to measure the effects of a policy that has been adopted in only one or a few states. But that methodological challenge can limit our imaginations as reformers. Even though I don’t think he characterizes the research fairly, Kiesling helpfully challenges our imaginations.

Before getting into the methodological weeds, let me explain why I am not yet convinced that vote-by-mail would increase turnout. Below is Oregon’s turnout trend compared to the national trend. I show the presidential years and off-years as separate lines, because otherwise you get a confusing zigzag pattern. Oregon abolished polling places in 2000 and has run its elections entirely by mail since then. Turnout in the 2004 presidential election was strong, but not so great in 2008 and 2012. Turnout in the off-year elections since 2000 has been lower than it was in the 1980s and 1990s. I don’t see evidence of positive impact here. 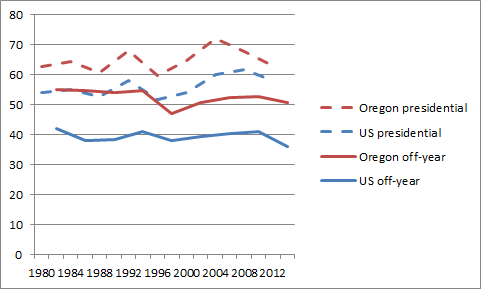 Kiesling calls it a “problematic assumption” to measure turnout as I do above: as the percentage of all eligible citizens who voted. (My data come from Michael McDonald.) Kiesling would rather define turnout as the percentage of registered citizens who vote. But if votes-per-registered rises, and yet votes-per-eligible-citizens does not, then there is only one mathematical possibility: the percentage of the population that registered must have fallen. That’s not a good thing. So the only way to assess the net impact of a reform on our democracy is by measuring turnout as votes per eligible population. We always do this, not in a “selective manner … to overlook (or even disparage)” vote-by-mail.

My graph simply allows you to see whether turnout has risen or fallen in Oregon before and after the vote-by-mail reform. That is not really a satisfactory method because many other factors are obviously at work. Nor can we conduct randomized experiments with new voting laws. Thus the way almost all academics study state policy reforms is by building large datasets that include statistics from all 50 states over many years. Then we try to isolate the apparent impact of a given change, controlling for everything else that we have measured, including the baseline turnout rates for states prior to the reform.* That method has yielded a rough consensus in favor of Election Day Registration–mentioned by Kiesling and exemplified in our own research.

This method cannot, however, assess the impact of a reform that has only been implemented in one or a handful of states. The math just doesn’t allow estimates of impact when there are very few cases in the category of interest. Thus, frustratingly, we omit Oregon’s vote-by-mail system from most of our models. Kiesling is right to complain about that gap, but I know of no satisfactory solution. One potential option would be to lump universal vote-by-mail together with other reforms, to increase the number of cases, but that would hide any special advantages of universal vote-by-mail.

Kiesling says that the research “lazily tries to extrapolate absentee ballot-based data, inappropriately uses VEP-based yardsticks, and/or focuses on presidential contests only—ignoring midterm and primary elections, where the approach is best suited to show dramatic results.” Those are not fair complaints about our models.

I’d still vote for and recommend universal vote-by-mail, as an experiment. The graph shown above makes me a little pessimistic about its impact (particularly in midterm elections). And I do lament the loss of a secret ballot when elections move to mail. The secret ballot was a hard-won reform designed to prevent voters from being coerced by employers and relatives or from selling their votes. (If you promise to pay me for voting for A, but my ballot is secret, I can take your money and vote for B, which ruins the market. In an election-by-mail, however, your boss, your spouse, or a bribe-giver can check your ballot.) Kiesling says the Oregon Secretary of State is aware of “just a dozen documented cases,” and I guess we could live with that–although each case of coercion is a human rights violation.

More broadly, I resonate with Kiesling’s frustration. If a state does something bold and different, the standard methods of social science really struggle to assess its impact. When a bunch of states implement the same rather modest change, we can measure impact, but often it’s disappointing. For instance, we have found that the variation in states’ education laws does not seem to matter for students’ media literacy or electoral participation. I don’t conclude that reforming education is a waste of time, but rather that the prevailing reform strategies are too weak. A few states have done more interesting things with civic education policy, but we can’t assess their impact using multivariate models.

As citizens, we must keep our imaginations vivid and hopeful. Statistics are always about the past, and the future can be different. I welcome the Washington Monthly’s cover article as a spur to creativity. A 21st-century election system should look very different from the clunky mechanisms we have in place today. Universal vote-by-mail could be the answer. I just don’t read the existing research evidence as Kiesling does.

*Kiesling writes: “But point out that in 2014, the nation’s three UVBM [universal vote-by-mail] states’ voter turnout—based on the identical VEP denominator—was 16 percent higher than non-UVBM states, and the response is often something along the lines of, ‘Yes, but that’s irrelevant because Oregon (and presumably now Washington and Colorado) have always been high-turnout states.’ As if Minnesota, Maine, and Wisconsin are any different?” This is overlooking the power of a multivariate model, which takes into account the historical turnout rate as well as many other variables. We favor Same Day Registration not because turnout is simply higher in states that have it, but because it is higher controlling for other factors.