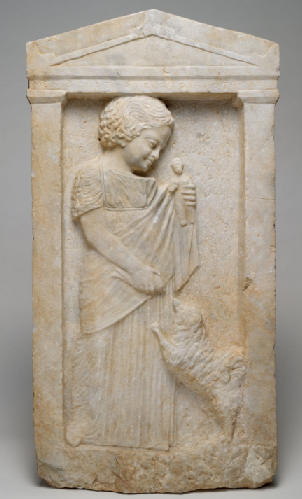 This is Melisto, a daughter of Ktesikrates from Sounion, which is now a day-trip from Athens. I think her name means “Melody,” unless it’s related to the word for “honey.”* Melisto lived for a few years (six, perhaps?) around 340 BCE. The Macedonian King Phillip II was dominating Greece at the time, and his son Alexander was soon to conquer a vast empire. Ktesikrates and perhaps other members of the family were sad enough to lose Melisto that they had a very handsome marble stele carved for her, with her name at the top. She is showing a live bird to her fluffy lapdog and smiling at the results. The figure in her other hand may be a votive object rather than a doll, according to the museum label. A nice little classical building shelters her and announces her name to us, 2,350 years later, in Cambridge, MA.

*Is it from melisma (song) or melisseios (honey)?

Associate Dean for Research and the Lincoln Filene Professor of Citizenship and Public Affairs at Tufts University's Tisch College of Civic Life. Concerned about civic education, civic engagement, and democratic reform in the United States and elsewhere.
View all posts by Peter →
This entry was posted in fine arts. Bookmark the permalink.