Yesterday, I wrote that higher education has limited capacity to improve economic mobility in the US, and our greatest contribution is to help understand and promote the policies that would increase justice. Right on cue, my colleagues at CIRCLE announced a new report they helped Nonprofit Vote to write. It shows that nonprofits are effective when they conduct nonpartisan voter registration and get-out-the-vote efforts for the people who come to them seeking services.

Nonprofit Vote calls this strategy “reverse door knocking,” because instead of canvassing highly disadvantaged people, you talk to them about voting when they knock on your organization’s door.

CIRCLE helped to document the positive impact in several different ways. Here is one. The graph shows the turnout (based on actual voting records) of people who were registered at participating nonprofits versus those who were registered in other ways. The categories are different levels of propensity to vote, as calculated by the firm Catalist, which usually advises campaigns on whom to target. If you’re a low-propensity registered voter who was registered through one of the participating nonprofits, you had an 18% chance of actually voting in 2014, ten points higher than if you were a registered voter with the same propensity but you didn’t receive outreach from a nonprofit. 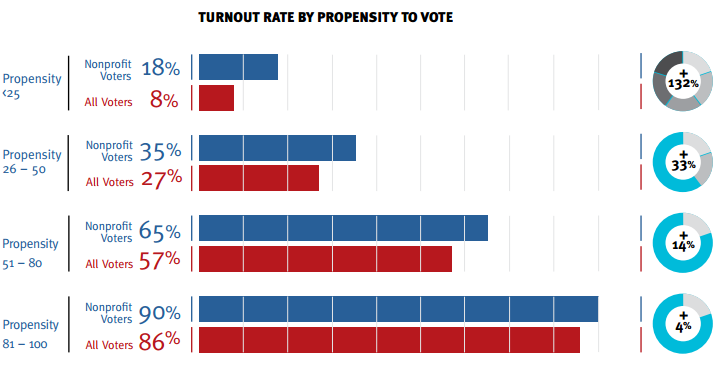