At Tufts on Wednesday, Danielle Allen made the following argument: the war on drugs lowers the chance that the police will solve any given murder by flooding a city with drug-related homicides. Once the homicide closure rate falls, there is a low chance that anyone who commits a murder will be caught. Under those circumstances, if you think someone might shoot you, you “shoot first,” as Allen said.

Right on cue, the New York Times reports from Baltimore: “as more people are being killed here, fewer killers are being caught. The homicide ‘clearance rate,’ the percentage of killings solved by the police, was 45.5 percent last year; today it is 32.8 percent, the police said. Nationally, the rate was 64 percent in 2013, the most recent year for which the Justice Department has statistics.”

I also found this trend line for Chicago: 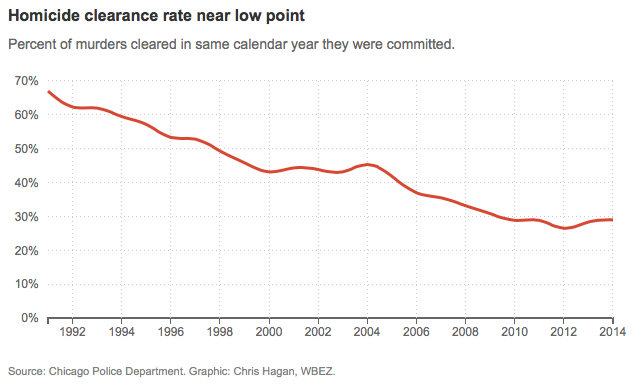 These are big declines. In 1992, if you committed homicide in Chicago, the odds were you were going to be prosecuted. In 2012-14, the odds were you would get away with it. That could plausibly change violence rates. If the police can’t protect you against murder, you may feel you have to do it yourself.

Two caveats, however. First, clearance rates are imperfect statistics, subject to being gamed by police departments. Second, even while homicide clearance rates were falling in Chicago, so were homicide rates. So that is not really evidence of a vicious cycle of declining clearance rate leading to growth in violence.

But despite those two caveats, there certainly seems to be a vicious cycle in the last few years in Baltimore and perhaps other big cities, and that is a really serious concern.