In The Reckoning (1994), Charles Nicholl carefully investigated the 1593 murder of Christopher Marlowe, arguing that it resulted from a struggle between the rival spy networks of Walter Raleigh and Robert Devereux (the 2nd Earl of Essex). It’s a compelling read and a brilliant use of scattered historical records to reveal hidden connections. But The Reckoning predated the current enthusiasm for actually mapping networks and crowd-sourcing the data. Now we have Six Degrees of Francis Bacon, a network map of documented figures from English history, 1500-1700. Using that tool, one can quickly create a map that shows the networks of Christopher Marlowe and Essex, with Raleigh appearing as an intermediary. 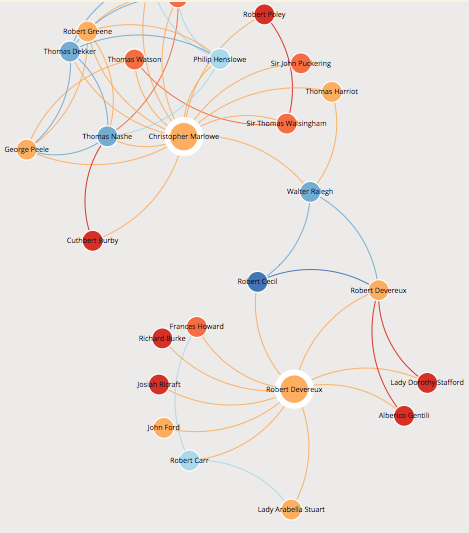 The diagram is by no means complete. For instance, Thomas Kyd is in the database but not linked to his former housemate, Marlowe; and the man who probably stabbed Marlowe, Ingram Frizer, isn’t on the map at all. But that isn’t a criticism, for the organizers ask visitors to add data. How many more stories will come to light as the map grows and historians use it?

(See also the murder of Marlowe and my version of “come with me.”)