Richard Fry of the Pew Research Center reports, “This year, the ‘Millennial’ generation is projected to surpass the outsized Baby Boom generation as the nation’s largest living generation, according to the population projections released by the U.S. Census Bureau last month.” His article is illustrated with this graph:

That analysis tells one important story. It suggests that the youngest generation will have growing political, economic, and cultural clout, which is true in some respects.

But there is also another valid story: even as the Millennials outnumber each of the older generations taken separately, younger people are declining as a percentage of the whole population. That analysis suggests that their political clout (dependent on their share of voters and activists) will likely shrink.

How can this be? On one hand, the youngest generation is larger than its predecessors because of population growth, while the older generations are shrinking because of mortality. (The downward slope of the Boomers in the Pew chart above is a momento mori.) Yet, on the other hand, each of the older age categories is larger today than the same category was in the past. The median age, after all, is rising. Since there are many age categories, not just two, it’s possible for the youngest generation to grow relative to every other generation while also shrinking relative to the whole. And that is what has happened over the past 50 years, as my graph shows: 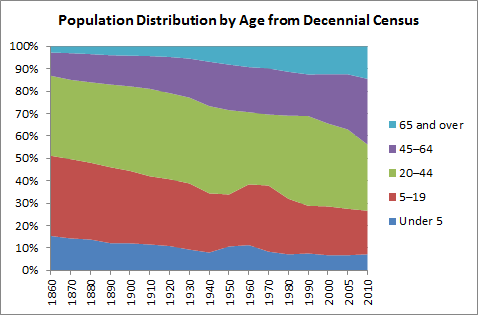 If we are champions of youth civic engagement, I think we can take some advantage of the large numbers of Millennials, but we must also address the fact that youth represent a smaller proportion of the whole population than ever before.