Education spending is pretty popular. In 2012, three quarters of American adults told the General Social Survey that our nation spends too little on education. If you look at that question over time, you’ll find an interesting generational pattern. The three generations born (respectively) before 1926, before 1946, and before 1966 have each held successively more favorable views of education spending. I’d understand that as a story of economic growth and development. Young people have needed increasing amounts of education to flourish in our increasingly complex society. That need became increasingly evident to adults who came of age later in the 20th century. Generation-X, however, has held the same opinion as the Baby Boomers; and the limited data on Millennials suggests they are also in the same camp. The upshot: support for education spending is stable at a high level, buoyed by the majority opinion of everyone born since 1926, and not subject to much short-term change. 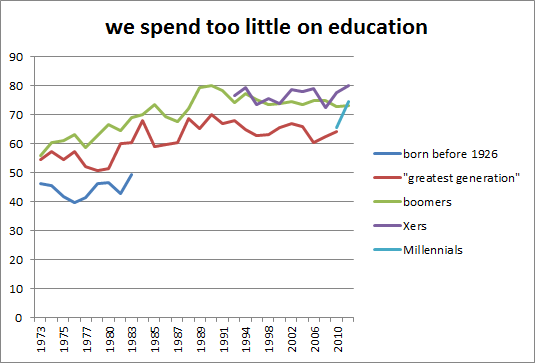 Welfare is different story. In 2012, almost half of adults (47.6%) told the GSS that we spend too much on it; one third thought welfare spending was about right, and just 19.1% said we should spend more. I have run a graph showing the “liberal” opinion (we should spend more), but I find the opposite graph more illuminating: see below.

Here we observe the oldest generation only toward the end of their lives, when they (alone) disagree with the conservative argument that we are spending too much on welfare. All the subsequent generations have moved pretty closely together. There have been spikes of concern about excessive welfare spending in the 1970s and the early 1990s. In those upticks, one can see the political opportunity for Ronald Reagan and Newt Gingrich. But there really hasn’t been a significant generational pattern to beliefs about welfare. The changes seem more correlated with short-term economic circumstances and/or government policy. For instance, when Reagan began cutting social spending and when Clinton declared the end of “welfare as we know it,” concern about over-spending fell. The implication: welfare spending is a constant political debate, and who wins at a given moment depends on policy and circumstances. 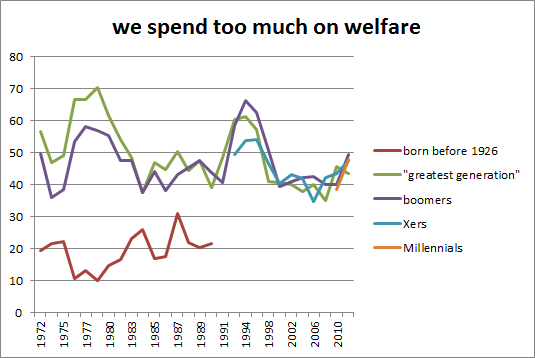 Finally, Social Security. One might expect that people nearing or in retirement would be the strongest supporters of spending money on this program, whereas younger people would be more reluctant. But the pattern of change over time for each generation is quite subtle, if one can detect it at all. Members of the “Greatest Generation,” for example, have held the same view of Social Security expenditures for the past 30 years. Likewise, Generation X has felt the same since they were young, even though they are now in middle age. The key pattern is a general increase in felt need to spend money on Social Security during the 1970s and 1980s, followed by a plateau. But if anything, the strongest supporters since 1990 have been relatively young adults. 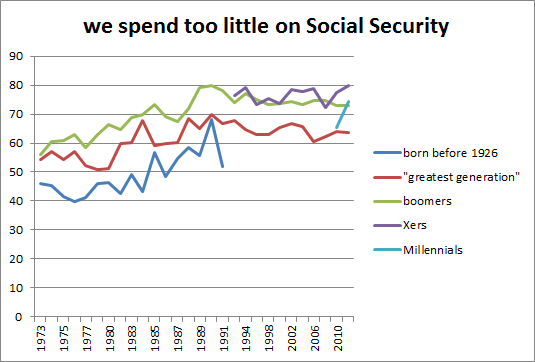 The implication is that Social Security remains very popular (no surprise there), but also that it’s not an old-person’s issue. X-ers and Millennials are actually more supportive than members of the Greatest Generation today.

The education and Social Security graphs look very similar. That is interesting because education is presumed to benefit the young. whereas Social Security focuses on the aged. Yet opinions about spending money for these two purposes track closely.  It would appear that the driving force is one’s general view of the role of government, not a calculation of one’s own needs and interests.